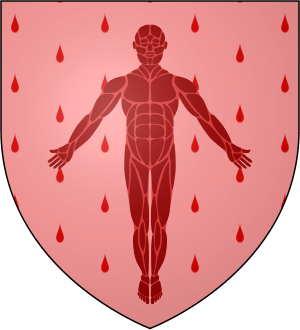 The sigil of House Bolton depicts a man flayed from his head to his heels.

Flaying, also called skinning or flensing, is a method of removing skin from bodies, such as butchered animals.[1][2] It can be used as slow and painful torture on living beings.[3][4]

Sharp knives are used to strip skin from flesh.[4] Hunters, sellswords, and warriors often carry skinning knive to use on animals.[2][5][6] Ramsay Snow owns a small curved knife with a hooked point, a razor-sharp edge, and a hilt of yellow bone.[7] Skinner is skilled with a small flensing blade.[8]

Flaying as torture is looked upon with disfavor by most people in the Seven Kingdoms.[9] The best known practitioners of flaying in Westeros is House Bolton, who are historically known for their practice of flaying their enemies. A flayed man is depicted on their banners.[10] Although the practice is forbidden, old ways die hard[11] and rumors persist that they continue to flay their prisoners in secret and maintain a hidden chamber in the Dreadfort to display the skins of their enemies.[10] Ramsay, the bastard son of Lord Roose Bolton, is fond of flaying victims alive. He and his followers allow exposed skin to fester, leading their torture victims to beg that the wounded body part be removed.[4] Ramsay also enjoys having young women released into the Bolton forests, before hunting them with his hunting hounds. He gives a quick death to women who give him good sport, then flays their corpses. The women who do not give him good sport are raped and then flayed alive. The skins of his kills are brought back with him to the Dreadfort as gruesome trophies, while the bodies of the women are fed to his dogs.[4][12]

Rebellious slaves are racked, flayed, and hanged at the Plaza of Punishment in Astapor.[3]

During the Age of Heroes,[13] House Bolton is said to have flayed the skins of several Stark lords and hung them in the Dreadfort. According to rumor, some Bolton lords or Red Kings wore the flayed skins of their enemies—including Starks, such as the son of Bael[14]—as cloaks.[15][11] The Boltons abandoned the practice of flaying their enemies once they bent the knee to the Starks.[16] The Chronicles of Longsister state that during the Rape of the Three Sisters by the Kings of Winter, which occurred two thousand years ago,[17] Belthasar Bolton had a Pink Pavilion made from the flayed skins of a hundred Sistermen.[18]

King Joffrey I Baratheon tells Sansa Stark that he was merciful by having her father, Lord Eddard Stark, beheaded for treason instead of being torn or flayed.[19]

Jojen Reed reveals that he has seen the bodies of Bran and Rickon at the feet of the man they call Reek and he is skinning off their faces with a knife.[20]

During the capture of Winterfell, Theon Greyjoy takes Bran and Rickon Stark hostage.[21] However, the brothers escape the castle with the help of Osha, Hodor, and Jojen and Meera Reed. Theon fails to track the boys down in the wolfswood.[16] Following the advice of Reek, he kills two peasant boys around the same age from the Acorn Water mill. Reek flays their faces and dips their heads in tar, allowing Theon to present the corpses as those of the Stark princes.[11]

For his alleged role in the sack of Winterfell, Theon is reportedly being flayed by Ramsay Snow, the Bastard of Bolton, at the Dreadfort.[22] Lord Roose Bolton delivers a piece of skin from the little finger of Theon's left hand to Robb Stark, King in the North, and his mother, Catelyn Stark, at the Twins.[9] Roose, shortly after, betrays the Starks in the Red Wedding.[8]

Daenerys Targaryen sees flayed slaves in the Plaza of Punishment in Astapor.[3]

Ramsay and Skinner of the Bastard's Boys flay Theon, who loses several body parts to their torture.[4]

Theon convinces the ironborn garrison of sixty-three men at Moat Cailin to surrender. The ironborn are escorted to the Bolton camp, where Ramsay Bolton has them flayed alive despite his promise of safe passage. The next day their skinless bodies, still dripping fresh blood, are impaled on pikes and displayed along the causeway.[23]

When Roose Bolton, the new Warden of the North, arrives at Winterfell he finds the ruined castle a refuge of more than two dozen squatters. He tells them he will be merciful if they serve well, and they are used as labor to partially restore the castle. After the work is completed Roose has them all hanged instead of flayed to death.[24]

According to a letter sent to Jon Snow from Ramsay, six women were flayed and Mance Rayder put in a cage in the winter elements with their skins to act as cloaks to keep him warm from the cold.[25]

Reek: Strip off their skins. Lord Bolton, he used to say a naked man has few secrets, but a flayed man's got none.
Theon: There will be no flaying in the north so long as I rule in Winterfell.[16]

At first glimpse, Dany thought their skin was striped like the zorses of the Jogos Nhai. Then she rode her silver nearer and saw the raw red flesh beneath the crawling black stripes. Flies. Flies and maggots. The rebellious slaves had been peeled like a man might peel an apple, in a long curling strip. One man had an arm black with flies from fingers to elbow, and red and white beneath.[3]

Flaying Theon will not bring my brothers back. I want his head, not his skin.[9]

Reek had been whipped and racked and cut, but there was no pain half so excruciating as the pain that followed flaying. It was the sort of pain that drove men mad, and it could not be endured for long.[4]

When you have known the kiss of a flaying knife, a laugh loses all its power to hurt you.[24]