From A Wiki of Ice and Fire
(Redirected from GRRM)
Jump to: navigation, search

George Raymond Richard Martin (born September 20, 1948), sometimes referred to as GRRM, is an American author and screenwriter of fantasy, horror, and science fiction. He is best known for his A Song of Ice and Fire series of bestselling epic fantasy novels, which has been adapted into Game of Thrones, a dramatic series on HBO. He was selected by Time as one of the "2011 Time 100," a list of the "most influential people in the world."[1] In 2012 he won the World Fantasy Award for Life Achievement.

George R. R. Martin was born on September 20, 1948 in Bayonne, New Jersey the son of a longshoreman, whose working class family lived not far from the Bayonne docks. As a youth, Martin became an avid reader and collector of 1960s "silver age" superhero comic books. Fantastic Four #20 (Nov 1963) features a letter to the editor he wrote while still in high school. He credits the attention he received from this letter, as well as his following interest in comics fandom and its fanzines, with his interest in becoming a writer. Martin has spoken of Marvel Comics and especially Stan Lee as having influenced him.[2][3][4]

Martin began to write science fiction short stories in the early 1970s, and while his start into a career as a professional writer was not easy (one of his stories was rejected by different magazines forty-two times), he was never discouraged; several years later he went on to win the first of several Hugo Awards and Nebula Awards for his short fiction. His first story nominated for the Hugo and Nebula Award was With Morning Comes Mistfall, published in 1973 by Analog magazine. The story lost both awards, but Martin did not mind too much, noting that joining "Hugo-and-Nebula Losers" Club was a big enough accomplishment for him.

In 1976 for Kansas City's MidAmeriCon, the 34th World Science Fiction Convention (Worldcon), Martin, along with his friend and fellow writer Gardner Dozois, conceived of and organized the first Hugo Losers Party. It was a gathering spot, held the final evening of MidAmeriCon, for the losing writers (and their friends and family) to commiserate following the Hugo Awards ceremony the previous night. The large party had been planned well in advance, and perhaps fittingly, being the party's undisputed host, Martin had lost again in 1976; this time it was for two Hugo Awards: the novelette "...and Seven Times Never Kill Man" and the novella "The Storms of Windhaven," co-written with Lisa Tuttle. In the years and decades that have followed, the Hugo Losers Party become an annual event, evolving into one of the largest social gatherings held at the annual Worldcon, while adopting a more politically correct title of Post-Hugo Nominees Reception along the way.[5]

Although much of Martin's work is fantasy or horror, a number of his earlier works are science fiction occurring in a loosely-defined future history, known informally as 'The Thousand Worlds' or 'The manrealm'. He has also written at least one piece of political-military fiction, "Night of the Vampyres", collected in Harry Turtledove's anthology The Best Military Science Fiction of the 20th Century.[6]

During the 1980s Martin also began to write for television and work as a series book editor. For television, he worked in Hollywood on the revival of Twilight Zone and the new Beauty and the Beast series. As a book series editor, he oversaw the development of the lengthy and still on-going Wild Cards cycle, which takes place in a shared universe in which an alien virus, released during an air battle over New York City, bestowed strange powers or disfigurements on a slice of humanity during World War II, affecting the history of the world thereafter. (The premise was inspired by comic book superheroes and the Superworld superhero role-playing game, of which Martin was gamemaster with local science fiction writers and friends.) Contributors to the long-running Wild Cards series have included Pat Cadigan, Stephen Leigh, Lewis Shiner, Howard Waldrop, Walter Jon Williams and Roger Zelazny. His own contributions to the series often feature Thomas Tudbury, "The Great and Powerful Turtle", a powerful psychokinetic whose flying "shell" consisted of an armored VW Beetle. The Wild Cards series continues under Martin's direction and editorship, with more than twenty volumes having been published; in 2012 the series will celebrate its twenty-fifth anniversary.

Martin's novella, Nightflyers, was adapted into a 1987 feature film that saw national release. The novella was also adapted into a 2018 television series. 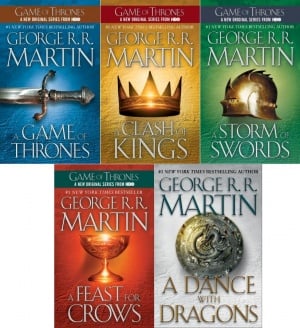 In 1991 Martin briefly returned to writing novels, and began what would eventually turn into his epic fantasy series, A Song of Ice and Fire (ostensibly inspired by the Wars of the Roses and Ivanhoe), which is planned to run to seven volumes. The first volume A Game of Thrones was published in 1996. In November 2005, A Feast for Crows, the fourth book in this series, became The New York Times #1 Bestseller and also achieved #1 ranking on The Wall Street Journal bestseller list. In addition, in September 2006 A Feast for Crows was nominated for both a Quill award, and the British Fantasy Award.[7] The series has received praise from authors, readers and critics alike.

In 2003 Fantasy Flight Games released the board game A Game Of Thrones and in 2010 Battles of Westeros, a miniatures board game based on the battles depicted in the A Song of Ice and Fire series. Additional games and related products continue to be published.

Martin has been a college instructor in journalism (in which he holds a master's degree) and when he was younger a chess tournament director. In his spare time he collects medieval-themed miniatures, reading and collecting science fiction, fantasy, and horror books, and treasuring his still-growing comics collection, which includes the first issues of Marvel's "silver age" Spider-Man and Fantastic Four.

On February 15, 2011 Martin married his longtime partner Parris McBride in a small ceremony at their Santa Fe, New Mexico home. The couple exchanged custom made, Celtic-inspired wedding rings made for them by local artisans. Area friends were in attendance and helped them celebrate the occasion. On August 19, 2011, they held a larger wedding ceremony and reception at Renovation, the 69th World Science Fiction Convention, in Reno for their larger circle of friends within the fantasy and science fiction fields.

Main article: A Song of Ice and Fire

In 1991 Martin briefly returned to writing novels, and began what would eventually turn into his epic fantasy series, A Song of Ice and Fire (reportedly inspired by the Wars of the Roses and Ivanhoe), which will run to at least seven volumes. The first volume A Game of Thrones was published in 1996. In November 2005, A Feast for Crows, the fourth book in this series, became The New York Times #1 Bestseller and also achieved #1 ranking on The Wall Street Journal bestseller list. In addition, in September 2006, A Feast for Crows was nominated for both a Quill Award and the British Fantasy Award.[7] The fifth book, A Dance with Dragons, was published in July 2011, quickly becoming a huge international bestseller, including a #1 ranking on the New York Times Bestseller list and many others. The series has received critical praise from authors, readers, and critics alike. 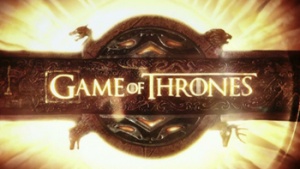 Title card of Game of Thrones

During completion of A Dance with Dragons and other projects, George R. R. Martin was also heavily involved in the production of the Game of Thrones television series, an adaptation by HBO of A Song of Ice and Fire named after the first book in the series, A Game of Thrones. Martin's involvement included the selection of a production team and participation in scriptwriting; he is listed in the opening credits as an executive producer of the series. Game of Thrones, which premiered in 2011 and concluded in 2019, is critically acclaimed.[8][9]

Critics have described Martin's work as dark and cynical.[10] His first novel, Dying of the Light, set the tone for most of his future work; it is set on a mostly abandoned planet that is slowly becoming uninhabitable as it moves away from its sun. This story, and many of Martin's others, have a strong sense of melancholy. His characters are often unhappy, or at least unsatisfied — trying to stay idealistic in a ruthless world. Many have elements of tragic heroes in them. Reviewer T. M. Wagner writes, "Let it never be said Martin doesn't share Shakespeare's fondness for the senselessly tragic."[11] This gloominess can be an obstacle for some readers. The Inchoatus Group writes, "If this absence of joy is going to trouble you, or you’re looking for something more affirming, then you should probably seek elsewhere."[12]

Martin's characters are multi-faceted, each with surprisingly intricate pasts, inspirations, and ambitions. Publisher's Weekly writes of his ongoing epic fantasy A Song of Ice and Fire, "The complexity of characters such as Daenarys [sic], Arya and the Kingslayer will keep readers turning even the vast number of pages contained in this volume, for the author, like Tolkien or Jordan, makes us care about their fates." [13] No one is given an unrealistic string of luck, however; so misfortune, injury, and death (and even false death) can befall any character, major or minor, no matter how attached the reader has become. Martin has described his penchant for killing off important characters as being necessary for the story's depth: "...when my characters are in danger, I want you to be afraid to turn the page, (so) you need to show right from the beginning that you're playing for keeps."

In addition to writing, Martin is known for his regular, decades-long attendance at various science fiction conventions and comics conventions and his accessibility to both genre's many fans. In the early 1970s critic and writer Thomas Disch identified Martin as a member of the "Labor Day Group", writers who congregated at the annual Worldcon, usually held on or around the Labor Day weekend.

Martin has a good relationship with his official fan club, the Brotherhood Without Banners, and has praised them in the past for their convention parties and gatherings. His many fans also gather at website forums devoted to both the A Song of Ice and Fire epic fantasy series and to his long-running Wild Cards series.

Martin has been criticized by a number of his many fans worldwide for the long delays between books in that series, notably the many-year gap between the fourth volume A Feast for Crows and the fifth volume A Dance with Dragons. This led him to respond online in kind, accusing angry fans of unfairly demanding he devote all of his time to the epic fantasy series, something he is unwilling to do; Martin has long-term writing and book-editing commitments on other projects, in addition to his best-selling series of epic fantasy novels.[14][15] Many of these fans have expressed concern that Martin will leave his fantasy series unfinished,[citation needed] in the same fashion as deceased author Robert Jordan did with his lengthy The Wheel of Time series.

Martin is strongly opposed to any type of fan fiction, believing it to be copyright infringement and a bad exercise for all aspiring writers. He never gives permission for any of his intellectual property to be used in fan fiction.[16] A more complete list of Martin's awards and nominations can be found at The Locus Index to Science Fiction Awards.

This page uses content from the English Wikipedia. The original content was at George R. R. Martin. The list of authors can be seen in the page history of George R. R. Martin. As with A Wiki of Ice and Fire, the content of Wikipedia is available under the Creative Commons Attribution-ShareAlike License.