Game of Thrones is an American medieval fantasy television series created for HBO by David Benioff and D. B. Weiss, featuring a predominantly British and Irish cast. The series is based on author George R. R. Martin's best-selling A Song of Ice and Fire series of seven planned fantasy novels, the first of which is A Game of Thrones.[5] The series debuted in the U.S. on Sunday evening, April 17, 2011.

Game of Thrones has been extremely well received critically, and has already garnered a loyal fanbase. The series was picked up for a second season on April 19, 2011, just two days after its premiere.[6] The production is based in Belfast, Northern Ireland, and has also filmed in Croatia, Iceland, Malta, Morocco, Scotland, Spain, and the United States.

Highly anticipated since its early stages of development, the first season of Game of Thrones was very well received by viewers and critics.[7][8][9][10] The series was picked up for a second season on April 19, 2011, two days after its premiere.[11] It was nominated for several awards, including Outstanding Drama Series for the 63rd Primetime Emmy Awards and Best Television Series – Drama at the 69th Golden Globe Awards; Peter Dinklage also won both ceremonies' Best Supporting Actor award (Emmy and Golden Globes). Other accolades include an Emmy nomination for Outstanding Casting for a Drama Series and an Emmy win for Outstanding Main Title Design.

The cable television series closely follows the multiple story lines of the A Song of Ice and Fire series, and author Martin has stated that the show's pilot script was very faithful to his work.[12] Set in the Seven Kingdoms of Westeros, where "summers span decades and winters can last a lifetime," Game of Thrones chronicles the violent dynastic struggles among the kingdom's seven noble families for control of the Iron Throne; as the series opens, additional threats from the snow and ice covered region north of Westeros and from the eastern continent across a narrow sea are simultaneously beginning to rise.[13]

See also: List of actors of Game of Thrones

Across the Narrow Sea, siblings Viserys Targaryen (Harry Lloyd) and Daenerys "Dany" Targaryen (Emilia Clarke) – the exiled surviving children of the previous king, Aerys II Targaryen, who King Robert overthrew – are on the run for their lives and trying to win back the throne. Dany is married to Khal Drogo (Jason Momoa), the leader of the Dothraki, for the promise of an army for Viserys. Iain Glen plays exiled knight Ser Jorah Mormont, who is sworn to help and protect the siblings.

The series began development in January 2007.[14] HBO, after acquiring the rights to the novels with the intent of turning them into an international cable television series, hired David Benioff and D. B. Weiss to write and executive produce the series, which would cover one novel's worth of material per season.[15] Initially, it was planned that Benioff and Weiss would write every episode save one per season, which author and co-executive producer George R. R. Martin was attached to write.[16][17] However, Jane Espenson and Bryan Cogman were later added to each write one episode of the first season.[18]

"The Sopranos in Middle-earth" is the tagline Benioff jokingly suggested for the television adaptation, referring to its intrigue-filled content and dark tone set in a fantasy world setting.[19] Traditional high fantasy is described as generally incidental to the series, with HBO programming chief Michael Lombardo finding the storytelling appealing rather than the low-key magic or the exotic milieu, in spite of the network’s new developmental policy to "take shots at shows that we wouldn’t have taken a shot at five years ago."[20][21]

The Game of Thrones budget has been compared to that of Rome.[22] The pilot reportedly cost HBO between US$ 5–10 million,[23] and the total budget for the first season has been estimated at US$50–60 million.[24]

HBO hired expert language creator David J. Peterson from the Language Creation Society to develop the Dothraki language — "possessing its own unique sound, extensive vocabulary of more than 1,800 words and complex grammatical structure" — to be used in the series.[25] The first and second drafts of the pilot script, written by Benioff and Weiss, were submitted in August 2007[26] and June 2008,[27] respectively. While HBO found both drafts to their liking,[28] Entertainment Weekly.[29] a pilot was not ordered until November 2008,[30][31] with the 2007–2008 Writers Guild of America strike possibly delaying the process.[32]

On May 5, 2009, it was announced that Peter Dinklage had been signed on to star as Tyrion Lannister in the pilot, and that Tom McCarthy was set to direct.[33]Shortly thereafter, pranksters at the Internet Movie Database edited the IMDb profile of actress Holly Marie Combs to indicate that she had been cast as Catelyn Stark; however, producers David Benioff and D. B. Weiss confirmed this was a hoax.[34] A few months later, in the beginning of August, it was revealed that Catelyn would be portrayed by Jennifer Ehle.[35]

On July 19, 2009, a number of further casting decisions were announced, including Sean Bean being given the role of Ned Stark,[36] thus confirming a rumour first reported a couple of days before.[37] Other actors signed on for the pilot were Kit Harington in the role of Jon Snow, Jack Gleeson as Joffrey Baratheon, Harry Lloyd as Viserys Targaryen, and Mark Addy as Robert Baratheon.[38][39]

On August 20, several more casting announcements were made, featuring Nikolaj Coster-Waldau as Jaime Lannister and Tamzin Merchant as Daenerys Targaryen, as well as Richard Madden in the role of Robb Stark, Iain Glen as Ser Jorah Mormont, Alfie Allen as Theon Greyjoy, and the young Sophie Turner and Maisie Williams as Sansa and Arya Stark, respectively.[40] On September 1, it was revealed that Lena Headey had been cast as Cersei Lannister.[41] On September 23, Martin confirmed that Rory McCann has been cast as Sandor Clegane.[42] Isaac Hempstead-Wright was confirmed as Bran Stark on October 14, followed by an announcement of Jason Momoa as Khal Drogo three days later.[43]

After the pilot was shot and the series picked up, it was announced that the role of Catelyn had been recast, with Michelle Fairley replacing Ehle.[44] Later, it was also confirmed that Emilia Clarke would replace Tamzin Merchant as Daenerys.[45][46]

Principal photography for the first season of the series was scheduled to begin on July 26, 2010,[48] with the primary locations being the Paint Hall Studio in the Titanic Quarter of Belfast, Northern Ireland,[49] and the city of Mdina, Maltaa change in location from Morocco.[50] For the initial shooting of the pilot in 2009,[51] additional filming locations included Carncastle,[52] Shane's Castle,[53] Castle Ward,[54] Magheramorne[55] and Tollymore Forest Park,[56] all in Northern Ireland. Doune Castle in southern Scotland was also used.[57]

For the second season, the city of Dubrovnik, Croatia, was used instead of Malta for scenes in King's Landing and elsewhere.[58] Scenes set north of the Wall were filmed in Iceland, on the Vatnajökull glacier, in November 2011.[59]

As part of HBO's HBO GO marketing campaign, HBO GO subscribers can view screeners of "Game of Thrones" episodes in the week before their TV broadcast.[66]

Other media and products 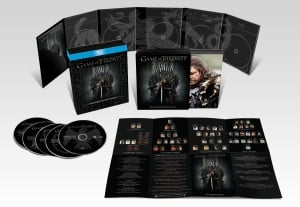 The ten episodes of the first season of Game of Thrones were published as a DVD and Blu-ray box set on 6 March 2012. The set includes extra background and behind-the-scenes material, but no deleted scenes, because almost all footage shot for the first season was used in the show.[70]

The first season's soundtrack by composer Ramin Djawadi, written within about ten weeks of the show's premiere, was released in June 2011.

An extension series called Thronecast: The Official Guide to Game of Thrones, presented by Geoff Lloyd and produced by Koink is made available on the Sky Atlantic website as well as through the UK iTunes store. Each episode features episode analysis and a cast interview.[72]

HBO has licensed Dark Horse Deluxe to produce a range of Game of Thrones-themed merchandise, such as statues and action figures. The goods are set to be brought to the market by March 2012.[73]

Other works based on the series

The series has also inspired other works.

Anticipation for the series was described by various media outlets as extremely high, with a dedicated fan base closely following the show's development.[74][75] By April 2011 multiple entertainment news outlets had described it as the most highly awaited television series of 2011.[76][77]

The majority of reviews for the show were very positive, with critics noting the high production value, the well-realized world, compelling characters, and giving particular note to the strength of the child actors.[9][10] Tim Goodman's review for The Hollywood Reporter stated, "a few minutes into HBO’s epic Game of Thrones series, it’s clear that the hype was right and the wait was worth it."[78] Mary McNamara from the Los Angeles Times called it "...a great and thundering series of political and psychological intrigue bristling with vivid characters, cross-hatched with tantalizing plotlines and seasoned with a splash of fantasy."[79] New York Post's Linda Stasi gave Thrones 3.5/4 stars stating, "The art direction, acting and incredible sets are as breathtaking as the massive scope of the series."[80] Many critics praised Peter Dinklage for his portrayal of Tyrion Lannister, with Ken Tucker from Entertainment Weekly stating, "...if Dinklage doesn’t get an Emmy for his clever, rude Tyrion Lannister, I’ll be gobsmacked"[10] and Mary McNamara from the Los Angeles Times stating, "If the man doesn't win an Emmy, heads should certainly roll." [79]

The premiere episode attracted 2.2 million viewers its initial airing on April 17th in the U.S.,[82] and totalled 5.4 million viewers across multiple Sunday and Monday night airings.[83] It averaged 743,000 and reached a peak 823,000 in UK and Ireland on its April 18th premiere.[84][85] HBO announced that they would be commissioning a second season on the strength of the reception of the premiere episode.[82]

The first season of Game of Thrones was nominated for thirteen of the 2011 Emmy Awards, including Outstanding Drama Series. It won two, Outstanding Supporting Actor in a Drama Series and Outstanding Main Title Design. Peter Dinklage, who plays Tyrion, was named best supporting actor by the Emmys, the Golden Globes, the Scream Awards and the Satellite Awards.

The following table provides an overview of the awards won by the show's first season. A table that also includes all nominations is available in the article dedicated to the season.