From A Wiki of Ice and Fire
Jump to: navigation, search
For the 2011 strategy game, see A Game of Thrones: Genesis 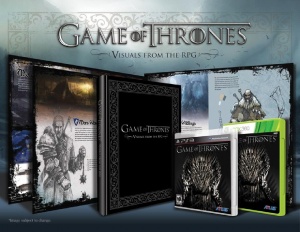 limited edition of the game, includes an art book.

Game of Thrones is a role playing video game for PC, PlayStation 3, and Xbox 360. Developed by Cyanide Studio, it was published in 2012 by Atlus USA in North America and Focus Home Interactive in Europe and Australia.

The game puts players in control of two original characters, Mors Westford and Alester Sarwyck. They do not appear in the novels of A Song of Ice and Fire, although George R. R. Martin has indicated to the studio that he might choose to make mentions of them, their families, or details from the game's story in later novels.[citation needed] The story is divided into point of view-based chapters, with cliffhangers and twists ending each chapter, much like in the novels where one chapter from the perspective of one character is followed by a chapter from a completely different character. Mors and Alester both have special abilities and three possible fighting modes. Mors is a skinchanger and can slip into his dog to find secret paths, listen in on conversations, and follow a character's tracks through scent. Alester is a red priest who can set fire to his sword using wildfire, can look into flames to find secrets, and can use certain fire-based magic.

The characters are fixed in terms of background and appearances, but the player can customize them greatly in terms of their abilities. Mors can be set as a Magnar (allowing dual-wielding), a Hedge Knight (one two-handed weapon), or a Landed Knight (a weapon in the hand, a shield on the other). Alester, on the other hand, can be set up as a Water Dancer (light and agile, with a slender blade), a Sellsword (daggers and poisons), or a Ranger (bow and arrows).

Each class has an initial skill tree. When characters level up, they can advance in the skill tree to unlock new abilities in combat. At level 7, characters will have a choice to make, selecting specializations that will open up new skill trees. For example, having started Mors as a Landed Knight, the player can select a new skill tree opening up more defensive capabilities, building the character into a true defensive-minded tank. The other option is to instead switch into one of the two initial skill trees not selected at the beginning. In the case of Mors as a Landed Knight, this means he can add skills as a Magnar or Hedge Knight, essentially taking a dual-class approach with the character being more versatile, but having less powerful and focused options. Finally, there is a third skill tree related to magic for each character: skinchanging for Mors and red priest magic for Alester.

Cyanide's goal is something dynamic and strategic. The strategic side was something they wanted since the beginning of the development, but they did not want a turn-based system as they felt it would make combat too slow. Instead, there is a menu wheel of actions which opens during the fight and the action moves in slow-motion behind this menu, similar to The Witcher or Assassin's Creed series. In concrete terms, the player can push a key, time slows, and a menu opens providing options while engaging the enemy in slow-motion. In that wheel the player can choose the next three actions of the characters controlled. For example, by hitting the key to slow the action down, the menu opens so that the player can choose a normal hit, followed by a block, and finally a knock-out attack. Once the player leaves the menu, the characters carry these actions out in real-time. On screen, this system seemed to work really well, neither hindering the action nor losing the player among menus.

Another important thing in the game is narration. Mors and Alester speak with numerous characters and the player must choose their response during conversations, as in Dragon Age or Mass Effect. Some answers will influence only the end of that dialog, but many choices will effect how the story develops. The example the developers showed to the media involved the reunion between Alester and his cousin. He insults Alester and the player must choose how Alester answers, such as insults in return, putting the cousin in his place, or being quiet. This will affect how Alester responds to commands when he is a companion, potentially choosing not to obey them. Conversing with other characters and investigating things through dialog will be another way of gaining experience and advantages in the course of play.

The game roughly covers the period of the first book of the saga, A Game of Thrones. It begins before Jon Arryn's death and ends before A Game of Thrones ends. The script was reviewed by George R. R. Martin and went through multiple drafts before he and everyone else on the team was happy with it. It was necessary in part because the developers wanted it to have as much fidelity as possible to Martin's A Song of Ice and Fire and wanted to avoid inconsistencies not just with the currently published books, but with future books in the series. One of the essential points that Martin and the developers wanted for this game was not simply to be a game where the book itself was the script. They did not want the player to play Eddard Stark, but instead show something exclusive and original, something fitting in within the gaps that exist in the story.

One of the other areas the creators wanted to avoid is the clichés of traditional fantasy role-playing games. For example, instead of having characters be inexperienced novices choosing to save the world, the two main characters are already experienced men, with strongly defined personalities and flaws.

The two main characters of the game are Mors Westford, a brother of the Night's Watch, and Alester Sarwyck, a red priest of R'hllor. Mors Westford is an old knight from the westerlands. Fifteen years ago, during Robert's Rebellion, Mors refused to carry out one of Lord Tywin Lannister's commands to kill a woman and her children, and was given the choice of a traitor’s death or the Wall. He took the black and became a member of the Night's Watch. He is now an officer and a ranger. Called "the Butcher", his chief task is finding and executing deserters from the Night's Watch. To help him, he has a large dog which helps him track runaways. Because Mors is a skinchanger, and because of his particular duties, it is said on the Wall that the dog is his only friend.

Alester Sarwyck is the elder son of Lord Raynald Sarwyck from Riverspring in the westerlands. For an unknown reason, Alester left Riverspring and went to Essos after Robert's Rebellion. He became a R'hllor follower and a red priest. He returns to Riverspring when he hears of his father dying. There he finds a devastated land where people tell of a peasant revolt. His sister,Elyana Sarwyck, tries to manage the lands of House Sarwyck. Alester's brother, Gawen Sarwyck, is missing and is accused of poisoning Lord Raynald. Finally, Alester's bastard half-brother, Ser Valarr Hill, desires to inherit Riverspring.

The fates of Mors and Alester cross during the game and interact with characters from the books, including Lord Varys, Queen Cersei Lannister, Lord Commander Jeor Mormont, Qhorin Halfhand, and Chataya. Conleth Hill and James Cosmo, actors from the HBO television adaptation Game of Thrones, voice the characters of Varys and Jeor, respectively. The design of the Iron Throne is also influenced by the design on the show, but otherwise most locations and character designs are original to the game, dating from before the time Cyanide and HBO came to an agreement on licensing.

The game's central story revolves around royal bastards and there are several possible endings to the game. The principal storyline is estimated to offer 30-35 hours of gameplay, and there are a number of side-missions bundled with the principal story. These side stories attempt to emulate the way the story of the novels branches out and contains many interwoven plot threads. These side-missions are optional in the course of playing the chapters of the game.

A limited edition of the game was released. Its art book, entitled Game of Thrones, has sixty-four pages showing visuals from the RPG, sketches, photos, renders and screenshots. These images are accompanied by commentary from the development team. Also included is a portrait of the Thrones team with a signed message from George R. R. Martin.