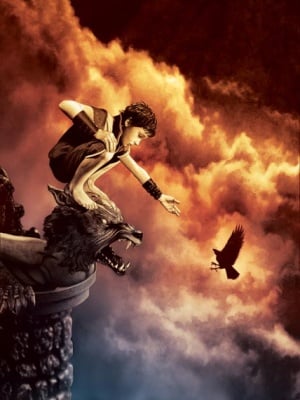 Bran Stark atop a gargoyle, by John Picacio ©

Gargoyles and grotesques are decorative statues in Westerosi architecture.[N 1]

The First Keep, the oldest part of Winterfell, is decorated with shapeless, rain-worn gargoyles.[1][2] At least one appears to sightlessly snarl.[3]

Instead of simple crenellations, the Valyrian Freehold decorated the ancient walls of Dragonstone with a thousand different gargoyles and grotesques.[4] Dragonstone's designs include basilisks, cockatrices, demons, griffins, hellhounds, manticores, minotaurs, and wyverns, among other creatures.[5] The middle and inner walls have guardian gargoyles.[4] A waist-high stone gargoyle is also found outside the castle before an inn at the island's port.[6] 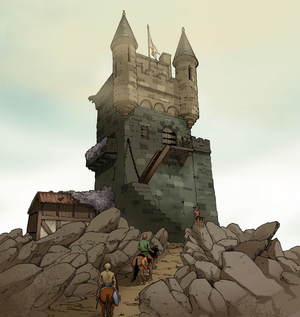 Standfast with turrets and grotesques, by Mike S. Miller

When Ser Eustace Osgrey held Standfast, parts of the castle's roof had ancient stone grotesques which were so weather-worn their original designs had become indiscernible.[7]

During the fierce storm which raged amid the birth of Daenerys Targaryen, gargoyles were ripped from the walls of Dragonstone to crash upon the royal fleet below.[8] Maester Cressen has become fond of the monstrous decorations at Dragonstone.[4]

Bran Stark enjoys climbing gargoyles to reach the roof of the First Keep at Winterfell. The boy also swings from the gargoyles so he can reach the broken tower.[1]

While moving from the gargoyles of the First Keep toward the broken tower within Winterfell, Bran Stark discovers Queen Cersei Lannister and her brother, Ser Jaime Lannister, within the First Keep. The knight pushes Bran out the window,[1] crippling the boy.[9] After recovering from his coma,[10] Bran has a dream involving climbing a tower and seeing red-eyed gargoyles which may once have been lions.[11] Rickon Stark later uses the far-eye of Maester Luwin to look at the gargoyles atop the First Keep from the maester's turret.[12]

Ser Davos Seaworth pats the stone head of the gargoyle at Dragonstone's port for good luck.[6]

Following the sack of Winterfell, Bran sees shattered gargoyles across the yard.[14]

Queen Cersei Lannister insults her younger brother Tyrion, a dwarf, by referring to him as a gargoyle.[15] Sandor Clegane also refers to Tyrion as a twisted little gargoyle.[16]

While at the Eyrie, Sansa Stark makes a snow castle of Winterfell. Petyr suggests she depict snow-covered gargoyles as white lumps on her version of the First Keep.[17]

When Ramsay Bolton weds "Arya Stark" (actually Jeyne Poole) in the godswood of Winterfell, Theon Greyjoy thinks that Hother Umber resembles a gargoyle in the mists.[18] 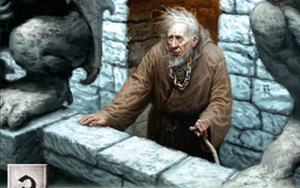 Maester Cressen and the gargoyles of Dragonstone, by Rafal Hrynkiewicz © Fantasy Flight Games

When first he came to Dragonstone, the army of stone grotesques had made him uneasy, but as the years passed he had grown used to them. Now he thought of them as old friends.[4]

The nightfire burned against the gathering dark, a great bright beast whose shifting orange light threw shadows twenty feet tall across the yard. All along the walls of Dragonstone the army of gargoyles and grotesques seemed to stir and shift.[19]