Lady Genna Lannister is a member of House Lannister wed to Ser Emmon Frey, with whom she has four children: Ser Cleos, Lyonel, Tion, and Walder Frey.[3]

Genna is the only daughter of the late Lord Tytos Lannister and Lady Jeyne Marbrand,[4] and she is the younger sister of Tywin Lannister, Lord of Casterly Rock. Genna is the aunt of Queen Cersei Lannister, Ser Jaime Lannister of the Kingsguard, and Tyrion Lannister, having taken on a maternal role for the siblings after the death of Tywin's wife, Lady Joanna Lannister.[5]

In her youth Genna was shapely, always threatening to overflow her bodice. However, as she aged, she became fat. She now has a square figure, and an enormous bosom with a broad and smooth face.[6]

Genna is intelligent and shrewd, loving and sarcastic.[6] She bosses around her husband, Ser Emmon Frey, whom she considers inept.[6] Her personality is such that she is able to claim a place in Ser Jaime Lannister's war council without opposition,[7] which is uncommon for a woman. Genna is one of the few Lannisters who recognizes Tyrion's talent for political maneuvering.[6]

Genna was born in 245 AC[1] to Tytos Lannister, Lord of Casterly Rock, and his wife, Lady Jeyne Marbrand.[4] She had two older brothers, Tywin and Kevan, and would later have two younger brothers, Tygett and Gerion, as well.[8][9][3] 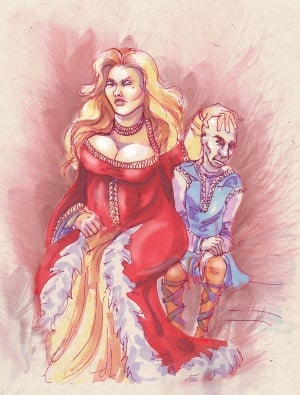 Genna and Emmon Frey, by Kethryn ©

Genna's father, Lord Tytos Lannister, wanted to be liked and loved.[10] Sensing that weakness, Walder Frey, Lord of the Crossing in the riverlands, convinced Tytos to betroth his only daughter to one of Walder's sons.[6] As such, in 252 AC,[N 1] at the young age of seven,[6][10][2] Genna was betrothed to Emmon Frey, Walder's second son and seven years her senior. This was announced at a feast at Casterly Rock with half the nobility of the westerlands in attendance. Genna's eldest brother, Tywin, spoke out against the match. While Lord Tytos went white as mare's milk, the betrothal remained standing.[6][10] Although Genna did not approve of all Tywin did, nor enjoyed the company of the man he later became, Genna loved her brother for having been the only person to speak out against her betrothal.[6]

Although Genna herself had not been satisfied with her husband either, she has given Emmon four sons: Cleos, Lyonel, Tion, and Walder. Genna claims that all four boys are Emmon's, and none dare to question her, least of all Emmon.[6] Following their marriage, Genna and Emmon remained at Casterly Rock.[11]

Genna was present for the birth of Cersei and Jaime Lannister, the twins of Lord Tywin Lannister and Lady Joanna Lannister.[6] After Joanna died giving birth to Tyrion Lannister in 273 AC,[10][12] Genna took on a somewhat maternal role for the three children. She was always pinching Jaime's ear.[6]

In 276 AC, during the a tourney Tywin organized in the west to celebrate the birth of Prince Viserys Targaryen, Genna confided in Cersei that the plan was that her betrothal to the crown prince, Rhaegar Targaryen, a match Lord Tywin had desired for his daughter for years, would be announced during the final feast. When no such announcement was made and King Aerys II Targaryen had left the westerlands, Cersei ran to Genna with her questions, at which point Genna confided in her niece that Tywin's proposal had been refused by Aerys. She promised Cersei that her father would find her a better husband than Rhaegar.[5] Cersei eventually wed King Robert I Baratheon after Robert's Rebellion.[10]

When Genna told Tywin that his youngest son, Tyrion, a dwarf he strongly disliked and blamed for Joanna's death, resembled him the most, Tywin grew so angry he refused to speak to Genna for half a year.[6]

Genna had been her father's "precious little princess", and later her brother Tywin's as well. However, according to her, she fell out of Tywin's favor when she "disappointed him",[6] although it is not known what Genna did.

Genna's third son, Tion Frey, is murdered by Rickard Karstark, Lord of Karhold, at Riverrun while a captive of Robb Stark, King in the North.[13]

Edmure Tully, Lord of Riverrun, is attainted by King Tommen I Baratheon after the Red Wedding. Riverrun and its lands and incomes are granted to Ser Emmon Frey and his wife, Lady Genna.[15] Riverrun is still held by Ser Brynden Tully, however, so the castle is placed under siege.[16] Genna with Jaime Lannister at Riverrun, by Pojypojy ©

Genna and Emmon are present for the siege of Riverrun, which is led by Emmon's nephew, Ser Ryman Frey, and the newly appointed Warden of the West, Ser Daven Lannister. Queen Cersei Lannister sends her brother Jaime, Lord Commander of the Kingsguard, to resolve the siege.[17] When Genna declares that Cleos's remains should be laid to rest at Casterly Rock, Jaime lies that he will have his cousin's bones sent home, as the remains have been lost during war.[6] Genna tells Jaime that his younger brother Tyrion was most like their father Lord Tywin Lannister, while Jaime himself is not, and that this is what scares her the most, following Tywin's death.[6]

Genna advises Jaime to execute the captive Edmure, as she considers him a danger. She also sees a potential danger in Edmure's unborn child, as well as Edmure's uncle, Brynden the Blackfish, not considering Lannister hold over Riverrun to be safe as long as a male Tully heir remains alive. She believes if Edmure's unborn child is a girl, the child could marry her grandson, Tywin Frey, thereby uniting the Frey and Tully lines. However, she would have preferred control of Darry instead of Riverrun, despite it being less rich than Riverrun, as House Darry is extinct in the male line, as opposed to House Tully.[6]

Genna is present during Jaime's war council near Riverrun. Following the departure from the tent of the other lords, Genna asks Jaime what he means to do about the danger that Edmure himself represents, but Jaime only states that Edmure be left to him.[7] Jaime wonders to himself whether Genna would agree whether he sounds like Tywin, after he threatens the life of Edmure's unborn child.[7]

Edmure eventually surrenders Riverrun, but he allows his uncle Brynden to escape before the Lannister soldiers enter the castle. When her Emmon complains that Brynden might return to claim Riverrun, Genna informs him that he must hold the castle himself, or destroy it and return to Casterly Rock. Genna suggests that Riverrun's guards could be questioned about Brynden's whereabouts, but Jaime refuses, having promised Edmure that the garrison would not be harmed if the castle yields peacefully. When Jaime agrees to allow the garrison to leave, Genna is skeptical they will keep to their vows never to take up arms against House Lannister. Genna and Emmon hold Riverrun with a garrison of their own, consisting of two hundred men.[11]

Tom of Sevenstreams remains at Riverrun after the Frey and Lannister hosts depart.[11] Unbeknownst to Genna and Emmon, however, the singer is affiliated with the brotherhood without banners, now led by Lady Stoneheart.[18]

Genna: I am sorry for your loss.


Genna: Very nice. Will they make you a gold father too? Tywin was the loss I meant.[6]
—Genna and Jaime Lannister

Emmon: I have the decree. Signed by the king, by Tommen, see, the royal seal, the stag and lion. I am the lawful lord of Riverrun, and I will not have it reduced to a smoking ruin.
Genna: Oh, put that fool thing away. So long as the Blackfish sits inside Riverrun you can wipe your arse with that paper for all the good it does us.[6]

I may be an old fat woman, but I do not have cheese between my ears, Jaime.[6]

I was my father's precious princess ... and Tywin's too, until I disappointed him. My brother never learned to like the taste of disappointment.[6]

Though she had been a Frey for fifty years, Lady Genna remained very much a Lannister. Quite a lot of Lannister.[6]

Lady Genna claimed her stool with a look that dared any man there to question her presence. None did.[7]

Jaime: I would have expected you to depart with the Freys.


Tom: That one up there's a Frey, and this castle seems a nice snug place to pass the winter. Whitesmile Wat went home with Ser Forley, so I thought I'd see if I could win his place. Wat's got that high sweet voice that the likes o' me can't hope to match. But I know twice as many bawdy songs as he does. Begging my lord's pardon.


Jaime: You should get on famously with my aunt. If you hope to winter here, see that your playing pleases Lady Genna. She's the one that matters.[11]
—Jaime Lannister and Tom of Sevenstreams