From A Wiki of Ice and Fire
(Redirected from Great Sept)
Jump to: navigation, search 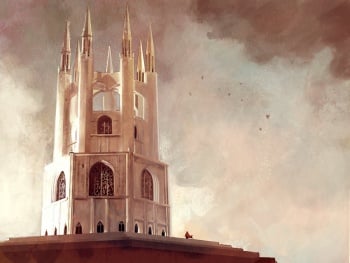 The Great Sept of Baelor, also called the Great Sept[1] and Baelor's Sept,[2] is the center of religious worship for the Faith of the Seven and the seat of the High Septon of the Faith. It is located in King's Landing, the capital of the Seven Kingdoms. The building is named after the septon-king, Baelor the Blessed. The Great Sept is rivaled only by the Starry Sept of Oldtown and the castle sept of Highgarden.[3]

See also: Images of the Great Sept of Baelor 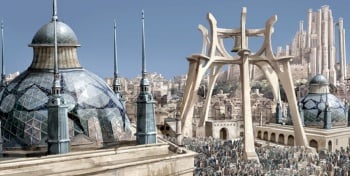 The sept, plaza, and Red Keep with King's Landing.
Art by Kim Pope, for Game of Thrones

The Great Sept of Baelor is named after the septon-king Baelor the Blessed. It is located at the top of Visenya's Hill, surrounded by a white marble plaza. It features a statue of Baelor, which stands tall and serene upon his plinth; his face is a study of benevolence.[4] Large gardens, capable of holding hundreds of people, surround the sept.[5]

The sept is an impressive marble dome structure with seven crystal towers, each of which has bells. Only on momentous occasions, such as the death of a king, are all of them rung.[6] The lofty dome is made of glass and gold and crystal.[7] Around the doors leading into the building is a raised marble pulpit from which a septon can address a gathering crowd.[2] Past the doors is the entrance hall of the sept, which is known as the Hall of Lamps. Those entering the hall walk beneath suspended globes of colored leaded glass.[7]

From the entrance hall, through the double-doors, is the sept-proper, with seven broad aisles which meet beneath the dome. It has seven large transepts.[7] Its floors are made of marble, and great windows of leaded, colored glass, and the seven altars are set about with candles.[5] Different altars are used for different ceremonies, depending on their purpose. For example, marriages are always conducted at the altar between two towering gilded statues of the Father and the Mother.[8] There are several sets of doors leading into the sept-proper; septons use the Father's Doors, septas the Mother's Doors, and silent sisters the Stranger's Steps.[9]

Below the sept are tombs where kings are laid to rest,[10] cells for penitents,[5] and vaults that hold costly vestments, rings, crystal crowns, and other treasures of the Faith.[5] Thrice yearly septons from Baelor's Sept create heraldic drawings and illuminations for the White Book of the Kingsguard.[10] 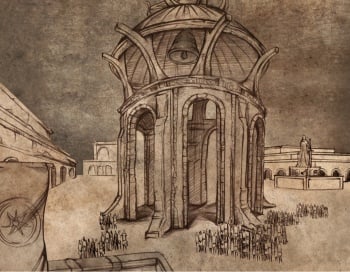 Bell tower in the plaza outside the Sept

During the reign of King Aegon I Targaryen, a sept for the smallfolk of King's Landing was made in a sunken cog in the Blackwater Rush, while the High Septon in Oldtown sponsored a grander sept atop Visenya's Hill.[11] The Sept of Remembrance was then built on the Hill of Rhaenys to honor the late Queen Rhaenys Targaryen.[11] King Maegor I Targaryen destroyed the Sept of Remembrance during the Faith Militant uprising, however, and replaced it with the Dragonpit.[12]

Inspired by a vision, Baelor I Targaryen ordered the construction of a great sept atop Visenya's Hill; the fate of the grand sept atop the hill from Aegon the Conqueror's reign is unknown. The Great Sept was completed years after the death of Baelor the Blessed,[13] and it replaced the Starry Sept of Oldtown as the center of the Faith in the Seven Kingdoms.

When Dorne join the Seven Kingdoms during the reign of Daeron II Targaryen, the king rode with Maron Martell, Prince of Dorne, from the Red Keep to the Great Sept. The two men placed a wreath before the statue of Baelor the Blessed.[14] 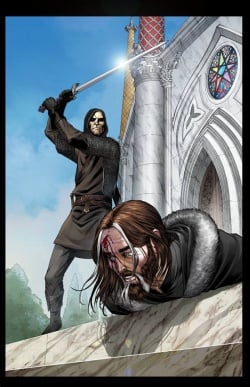 With the influx of people in King's Landing before the Hand's tourney, a woman's head is found floating in the rainbow pool of the Great Sept.[1]

The sept's bells ring dolorously for a day and a night after the death of King Robert I Baratheon.[2][18]

Lord Eddard Stark is taken to the steps of the Great Sept of Baelor where, unbeknownst to him, Yoren, his daughter Arya Stark, and the disguised Ser Barristan Selmy are amongst the crowd. Eddard makes a false public confession, but the plan goes awry when King Joffrey I Baratheon declares that Eddard must be executed, to the evident shock of Queen Cersei Lannister, Varys, and the High Septon. Ser Ilyn Payne beheads Eddard on the steps with his own greatsword, Ice.[2]

The High Septon is outraged at Lord Stark's execution, claiming it profaned the Great Sept with blood.[19] Hallyne informs Tyrion Lannister that two hundred jars of wildfire were discovered in a storeroom below the sept in 298 AC.[20] To turn public opinion against Stannis Baratheon, now a supporter of R'hllor, Tyrion spreads the word that Stannis intends to burn the Great Sept.[21][22]

Thousands jam the Great Sept of Baelor prior to the Battle of the Blackwater.[23] The sept's bells joyously thunder after Stannis's attack on the city is defeated.[18] More than six hundred new knights stand vigil in the Great Sept before walking barefoot to the Red Keep.[24]

The royal wedding of Joffrey and Margaery Tyrell takes place at midday on the first day of the year 300 AC in the Great Sept of Baelor.[8][25] After Joffrey dies during his wedding feast, his body is entombed in the Great Sept.[10]

Ser Jaime Lannister stands vigil for his late father, Lord Tywin, whose body rests under the Great Sept's lofty dome of glass and gold and crystal, upon a stepped marble bier. Tywin's corpse stinks so badly no one is able to enter the sept for days afterward.[9]

Instead of a lavish ceremony in the Great Sept, King Tommen I Baratheon weds Joffrey's widow, Margaery, in the castle sept of the Red Keep.[26]

Sparrows gather in the Great Sept's plaza and beneath its doors.[17] After the High Septon dies, the Most Devout come close to selecting Septon Luceon as the successor. Sparrows enter the Great Sept, however, and force the elevation of the so-called High Sparrow.[17] Queen Regent Cersei Lannister meets with the High Sparrow within the sept and agrees to allow the reestablishment of the Faith Militant.[17]

The Faith of the Seven confines Margaery in a cell atop one of the Great Sept's towers, although a crowd gathers outside the sept in protest.[27] Cersei is pleased at her rival's arrest, but the High Sparrow also has the queen regent imprisoned in a tower cell.[27] 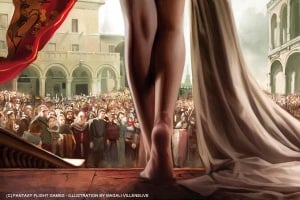 Cersei Lannister disrobes on the steps of the Great Sept. © FFG

Tyrion Lannister thinks that the Temple of the Lord of Light in Volantis is three times the size of the Great Sept of Baelor.[28]

Poor Fellows surround the Great Sept, beneath which are imprisoned Osney Kettleblack and the Blue Bard.[29] Cersei is visited by the High Sparrow and her uncle, Ser Kevan Lannister.[29] Smallfolk and Poor Fellows crowd the plaza during Cersei's walk of atonement to the Red Keep.[4]

You shall wed the king in the Great Sept of Baelor, before the eyes of gods and men.[30]

When Sansa had first beheld the Great Sept with its marble walls and seven crystal towers, she'd thought it was the most beautiful building in the world, but that had been before Joffrey beheaded her father on its steps.[22]