From A Wiki of Ice and Fire
(Redirected from Greyjoy Rebellion)
Jump to: navigation, search 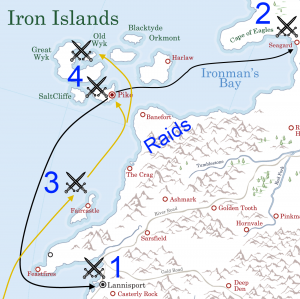 Quellon Greyjoy, Lord Reaper of Pyke, desired to strengthen the ties of the Iron Islands with the rest of the Seven Kingdoms. His ironborn remained neutral for most of Robert's Rebellion, but Quellon decided to rise in support of Robert Baratheon, Lord of Storm's End, after the Battle of the Trident. Lord Quellon died in battle at the Mander, however, while attacking the Reach near the end of the war. [5]

Quellon’s successor and eldest son, Balon Greyjoy, rejected the reforms and desired independence for the ironborn. Since House Greyjoy had only joined the rebellion near its end, they did not suffer heavy losses like the other Great Houses. Over five years Lord Balon constructed a new fleet of one hundred war galleys, the Iron Fleet.[5]

Balon believed that Robert I's rule was insecure, that the new king lacked support amongst the nobility and would not be able to muster a host against the ironborn.[6][7] Rodrik Harlaw, Lord of Harlaw, unsuccessfully advised Balon against rebelling.[8]

In 289 AC, six years after Robert overthrew House Targaryen, Balon proclaimed himself King of the Iron Islands and led a rebellion against the Iron Throne. Beneath Nagga's ribs on the holy isle of Old Wyk, the priest Tarle the Thrice-Drowned crowned Balon with a driftwood crown.[9]

Hoping to control the Sunset Sea, Balon began his rebellion with the burning of the Lannister fleet at anchor, a surprise attack on Lannisport in the westerlands planned by his brother Euron and led by another brother, Victarion, Lord Captain of the Iron Fleet.[10] Victarion tossed the first torch onto the flagship of Tywin Lannister, Lord of Casterly Rock.[9]

The victory at Lannisport gave King Balon freedom to launch an attack against Seagard in the riverlands by Rodrik, his eldest son. Rodrik was slain by Jason Mallister, Lord of Seagard, during the storming of Seagard, however, and his reavers were thrown back into Ironman's Bay in defeat.[11]

Germund Botley claimed a gilded breastplate from a Lannister captain,[9] and the father of Podrick Payne was killed at some point during the war.[4] 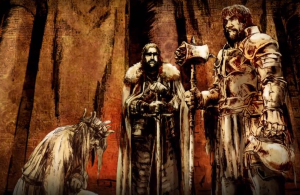 Robert used superior numbers and resources to crush the rebellion. His brother Stannis Baratheon, Lord of Dragonstone and the master of ships, joined the royal fleet with the Redwyne fleet from the Arbor and ships from Oldtown. They caught and smashed Victarion's Iron Fleet in the Straits of Fair Isle. The husband of Gwynesse Harlaw was killed in this sea battle off Fair Isle,[8] while Aeron Greyjoy was captured and spent the rest of the war beneath Casterly Rock.[12] Stannis's victory over Victarion near Fair Isle allowed Robert's forces to cross from the green lands to the Iron Islands.[12]

Robert was supported by Eddard Stark, the Lord of Winterfell and Warden of the North, and Tywin Lannister, the Warden of the West.[5] Ser Gregor Clegane was part of Tywin's forces.[13] Stannis subdued Great Wyk in his brother's name,[14] while Ser Barristan Selmy, Lord Commander of the Kingsguard, led the attack on Old Wyk.[15] The islands of Harlaw and Orkmont were also invaded.[5]

The final battle was on the island of Pyke, led by Robert and his childhood friend, Eddard. The nearby Botley castle was destroyed, as was the town of Lordsport beneath it, before the main attack on the castle of Pyke was launched. Robert's forces assaulted the southern wall with siege engines, shattering the main watchtower and bringing parts of the surrounding wall down.[11] Maron Greyjoy, the second of Balon's three sons, was killed in the breach. Thoros of Myr was first through the breach wielding a sword coated in wildfire.[16] The fighting in the castle was fierce, but eventually the castle was taken. Jorah Mormont, Lord of Bear Island, who was shortly behind Thoros,[17] and Jacelyn Bywater, who lost a hand during the fighting,[18] earned knighthoods from Robert for their bravery. Old Nan's grandson was killed during the siege.[19] 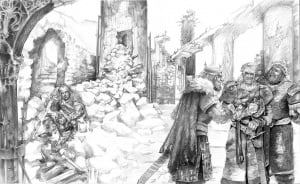 The rebellion resulted in the castle of Pyke being severely damaged and partially rebuilt. The Faith of the Seven suffered abuse in the Iron Islands at the hands of fanatics who worship the Drowned God. Baelor Blacktyde, Lord of Blacktyde, was a child when his father died in the war. As a result he was taken away to Oldtown as a hostage following the end of the rebellion. He returned eight years later as a follower of the Seven.[9]

He (Balon) believed that Robert, as a usurper, might not have the strong support of the other lords the way that a Targaryen king would have. He also thought he could defeat Robert at sea.[7]

Balon: You may take my head, but you cannot name me traitor. No Greyjoy ever swore fealty to a Baratheon.
Robert: Swear one now or lose that stubborn head of yours.[5]