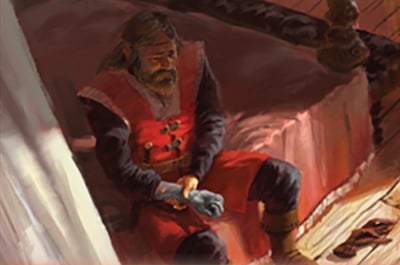 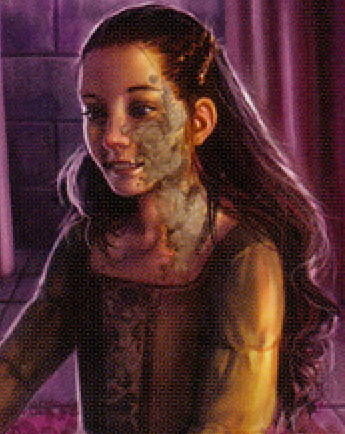 Greyscale is a disease that can leave flesh stiff and dead, and the skin cracked and flaking, mottled black and grey and stone-like to the touch.[1] Greyscale is one of the many virulent diseases common in Sothoryos.[2] Cold, damp climates like the Iron Islands and Dragonstone are also prone to the disease, and it is a danger for those traveling down the Rhoyne through the Sorrows.[3]

Greyscale generally affects children, especially in cold damp climates. The afflicted flesh stiffens, calcifies, and cracks. The victims are disfigured, but also rendered immune to the fatal form of greyscale, or the rare swift epidemic form of the disease known as grey plague.[3] The free folk consider people who survive greyscale unclean, and prefer to euthanize them, rather than take the chance that they may live to infect others.[4]

The mortal form of greyscale begins by affecting the extremities, noticeable only by a blackened fingertip or loss of sensation. As numbness creeps up a person's arms or legs, the flesh stiffens and grows cold, and the victim's skin will turn grey, resembling stone.[3] It is also possible for someone to turn to stone from the inside out, starting with their heart and lungs, with no visible symptoms on the extremities.[5] Blindness is common when the stone reaches the face.[3] The tongue and lips also turn to stone, causing difficulties with breathing.[6][7] In the final stages, the curse turns inward, affecting muscles, bones, and inner organs.[3] Although the disease is supposedly not painful, near the end, all victims go mad.[3]

If a person has been exposed to greyscale, they can prick each of their toes and fingers every day with a knife to check for infection. So long as the pricks hurt, they are safe. It is only when they cannot feel the blade that they will have cause to fear that they have contracted greyscale.[5]

Maesters say greyscale's progress can be stayed by limes, mustard poultices, and scalding-hot baths. Septons insist that prayer, sacrifice, and fasting are the cure. It is also colloquially believed that severing any affected appendages may stop the disease from spreading, but this treatment is not always effective.[3]

Some say that washing a person with vinegar helps prevent greyscale from spreading. Haldon is inclined to doubt the vinegar wash, but he sees no harm in trying it.[5]

The Rhoynar Prince Garin the Great went to war against Volantis and Valyria in the Second Spice War. He was captured in battle, and hung in a cage at Chroyane to see the enslavement of his people. The prince called down a curse upon the conquerors, entreating Mother Rhoyne to avenge her children, and that night the Rhoyne flooded out of season and a thick fog fell upon the river, and the Valyrian conquerors began to die of greyscale. To this day, the Sorrows is known for its foul fogs and waters, and the ruins of Chroyane are haunted by stone men, people suffering from the later stages of greyscale.[8][3]

Under the Bridge of Dream in the Sorrows, the crew of the Shy Maid are attacked by stone men. Tyrion Lannister falls into the Rhoyne, but Jon Connington manages to pull him out, saving his life.[3] However, Jon becomes infected with greyscale in the process.[9] Jon Connington keeps his greyscale secret, soaking his hand with bad wine since he fears if he asked for vinegar people would realize that he is infected.[10]

At the Wall, Val becomes wary of Shireen Baratheon because of her greyscale scars. Val tells Jon Snow that the child is not clean and should be killed, and that she would have given Shireen the gift of mercy long ago. She says that the free folk believe the disease never truly goes away in survivors, and insists that Gilly's son and his wet nurses not live in the same tower as Shireen.[4]

Death had lost its terror for Tyrion Lannister, but greyscale was another matter.

He had heard it said that there were three good cures for greyscale: axe and sword and cleaver. Hacking off afflicted parts did sometimes stop the spread of the disease, Tyrion knew, but not always. Many a man had sacrificed one arm or foot, only to find the other going grey. Once that happened, hope was gone.

He dare not let the greyscale become known. Queer as it seemed, men who would cheerfully face battle and risk death to rescue a companion would abandon that same companion in a heartbeat if he were known to have greyscale.

The maesters may believe what they wish. Ask a woods witch if you would know the truth. The grey death sleeps, only to wake again. The child is not clean![4]