Harma, known as Harma the Dogshead, is a captain in Mance Rayder's army, commanding the vanguard. She has a brother, Halleck.[1]

Harma has big cheeks. She is squat and round. She hates dogs. She kills a dog every fortnight to create a new totem for her banner.[2]

Before Mance Rayder made peace between them, Harma once warred with Rattleshirt.[2] Harma has become a well known raider among the brothers of the Night's Watch.[3] 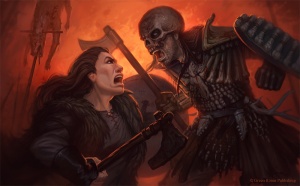 Harma is among the leaders of Mance Rayder's army that the Night's Watch are wary of.[4]

Harma leads the van of the free folk army that marches south down the Milkwater.[5] She is present when the free folk discover the remains of the camp of the Night's Watch following the fight at the Fist.[2] During the wildling assault on the Wall, Harma is spotted near Woodswatch-by-the-Pool.[6] She survives her raid and returns to the main encampment of Mance Rayder's army.[7] She is present when Jon Snow arrives at Mance's tent, and urges Mance to kill him.[7] She goes to battle against the southron knights when Stannis Baratheon's army appears,[7] but is killed in the ensuing conflict.[8]