King of the Iron Islands

From A Wiki of Ice and Fire
(Redirected from High Kings of the Iron Islands)
Jump to: navigation, search 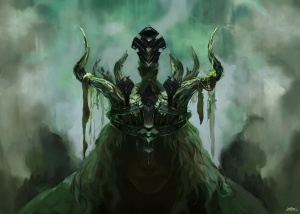 In antiquity each of the Iron Islands was ruled by two petty kings, a rock king who ruled the land and a salt king who led the island's ships, who were chosen by the island's captains in a kingsmoot.[2] The prophet Galon Whitestaff eventually called all of the minor salt and rock kings and the captains to Nagga's Hill on Old Wyk, where Urras Greyiron was chosen as the first High King of the Iron Islands since the Grey King. When a high king died, his driftwood crown would be broken into the sea, and his successor, who was always chosen on Old Wyk, would craft his own crown of driftwood. These early rulers were thus also known as driftwood kings.[3]

According to Archmaester Haereg's History of the Ironborn, there were at least 111 high kings.[3] During the reign of King Qhored Hoare, the ironborn held the western shore of Westeros along the Sunset Sea. Over the centuries Qhored's successors lost the Arbor, Bear Island, and much of the western shore, however,[2] as mainland houses such as the Hightowers, Gardeners, and Lannisters gained in strength.[3]

The kingsmoot tradition ended thousands of years ago when King Urron Greyiron murdered the other candidates and made the throne hereditary. The choosing of salt and rock kings in local kingsmoots ended and they were instead reduced to lords. House Greyiron ruled the Iron Islands for a thousand years,[4] using the simpler title King of the Iron Islands and wearing an iron crown which passed from king to successor.[5] They were ultimately overthrown by rivals and Andal warlords during the Andal invasion, however.[4] They were then succeeded by House Hoare, who ruled until the War of Conquest save a brief period of domination by Lord Aubrey Crakehall and the Westerlands.[6]

King Harwyn Hoare extended the ironborn rule over the riverlands by taking the Trident from the Storm King Arrec Durrandon.[2] His grandson, King Harren Hoare, known as Harren the Black, ruled all the lands between the mountains from the Neck to the Blackwater Rush. Harren the Black was the last King of the Isles and the Rivers, dying during the War of Conquest in Harrenhal when Aegon the Conqueror unleashed his dragons upon the castle.[7] Some ironborn lords claimed to be iron king, but they were crushed by Aegon when he invaded the isles in 2 AC. Rule of the islands then passed to Aegon's vassal, Vickon Greyjoy, the new Lord of the Iron Islands.[8]

Centuries later Balon Greyjoy declared himself King of the Iron Islands, in what was later called Greyjoy's Rebellion. However, Balon was defeated by King Robert Baratheon and the ironborn were again subjected to the Seven Kingdoms.

King Balon is reported to have fallen to his death at Pyke during a storm.[12]

Balon's brother, Aeron Greyjoy, calls a kingsmoot to select Balon's successor.[13] This leads to the crowning of another brother, Euron Greyjoy, at Nagga's hill on Old Wyk. Euron intends to conquer all of Westeros with Daenerys Targaryen's dragons.[14]

Although most of the ironborn have withdrawn from the North, Euron continues to style himself King of the Isles and the North.[15]

The exact number of high kings or driftwood kings chosen by the kingsmoot is unknown and their line of succession is rife with contradictions.[3]

Urron Redhand made the kingship hereditary and took the simpler title of King of the Iron Islands or Iron King.

Following the Targaryen Conquest, some claimants to the title of King of the Iron Islands rose:

In recent years, the Iron Islands have risen in rebellion against the Iron Throne, with a member of House Greyjoy as King: