From A Wiki of Ice and Fire
(Redirected from High Tower)
Jump to: navigation, search 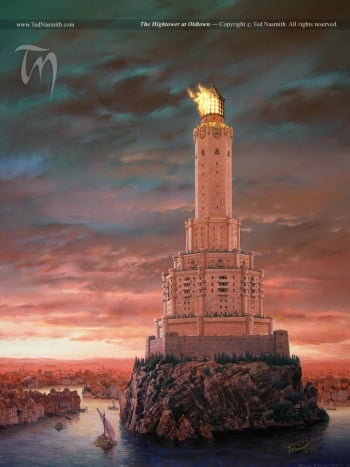 The Hightower at Oldtown, by Ted Nasmith © 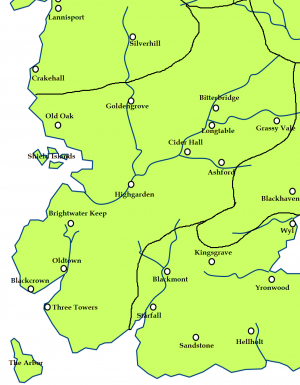 The Hightower or High Tower is the seat of House Hightower, one of the most powerful families of the Reach.[1] The castle and lighthouse is located in the port of Oldtown atop Battle Isle, where the Honeywine widens into Whispering Sound.[2]

According to a semi-canon source, the Hightower is a massive stepped tower with a beacon on top to guide ships into port.[3]The color of the beacon's fire is changeable, as green flame can be used to call House Hightower's banners.[4] The labyrinthine square fortress of unadorned black stone at the castle's foundation contains gloomy halls, vaults, and chambers.[5] The Hightower contains a high hall.[6] The top of the tower contains the apartments of the Lord of the Hightower.[7] Deep vaults are located underground.[8]

The Hightower is the tallest structure in the Seven Kingdoms,[3] even higher than the seven-hundred-foot Wall,[9] and it is the tallest tower in the known world.[10] The people of Oldtown can tell the time of day by the tower's shadow, and some claim that the Wall can be seen from its top.[2] Casterly Rock, however, is three times taller than the Hightower or the Wall.[11]

It is speculated by fans that the Hightower is one of the nine Wonders Made by Man written about by Lomas Longstrider.[12]

The foundation of the Hightower is a fortress of black stone of uncertain origin on Battle Isle. The stone is reminiscent of Valyrian roads and the Black Walls of Volantis.[5] A possible Valyrian origin is supported by the claim of Maester Jellicoe that Oldtown began as a trading post for ships of Valyria, Old Ghis, and the Summer Isles, predating the arrival of the First Men to Westeros. Septon Barth claimed Valyrians came to Westeros because their priests prophesied that the Doom of Man would come out of the land beyond the narrow sea.[5]

In contrast to the Valyrian theory, Archmaester Quillion suggests the fortress was made by the mazemakers. Maester Theron suggests it was created by Deep Ones, citing its similarities to the Seastone Chair. Some smallfolk believe the Hightower simply appeared.[5]

House Hightower of the Hightower is an ancient and noble family of impeccable lineage,[13] as they were First Men kings during the Dawn of Days.[1] Dwelling in the chambers of the fortress, the family built a wooden beacon tower rising some fifty feet above to light the way for trading vessels in foggy Whispering Sound. This first "high tower" was followed by taller timber towers.[5]

King Uthor of the High Tower paid for the construction of a stone tower. Some say this fifth tower, which rose two hundred feet above the harbor and made the castle a seat worthy of a great house, was designed by Bran the Builder, while others say it was by his son, another Brandon.[5]

Gyles I Gardener, King of the Reach, sacked Oldtown but was unable to capture the Hightower.[5] The Hightower and Oldtown were incorporated into the Kingdom of the Reach during the rule of the Sea Lion, Lymond Hightower.[14] Lord Jason Hightower rebuilt the tower a hundred feet higher.[5]

Roland I Arryn, King of Mountain and Vale, was inspired to build the Eyrie after visiting the Hightower and Casterly Rock.[15]

During Aegon's Conquest, Lord Manfred Hightower heeded the High Septon, who prophesied that the Hightower would burn with the rest of Oldtown if the city resisted the Targaryens. When Aegon the Conqueror arrived at Oldtown on dragonback, Lord Hightower opened his gates. Aegon spared the city, and the High Septon anointed him and acknowledged Aegon's right to rule the Seven Kingdoms.[16]

Ceryse Hightower returned to the Hightower in 39 AC when her husband, Prince Maegor I Targaryen, fled to Pentos in exile with his second wife, Alys Harroway. After becoming king, Maegor, reconciled with Ceryse in 43 AC and a great feast was held at the Hightower.[4]

When King Jaehaerys I Targaryen and Queen Alysanne Targaryen visited Oldtown in 54 AC, the queen landed Silverwing atop the Hightower. The royal couple resided in the apartments of Lord Donnel Hightower at the top of the tower during their stay.[7]

Maester Alfador served at the Hightower during the reign of King Viserys I Targaryen.[13]

During the Dance of the Dragons, Lord Ormund Hightower's young sons remained at the Hightower while Ormund led an army for the greens.[17] Ser Tyland Lannister, the master of coin for King Aegon II Targaryen, shipped a quarter of the Crown's treasury to safekeeping in the Hightower.[17] After the war, Samantha Tarly became the lover of Lord Lyonel Hightower and the mistress of the Hightower.[8] The fleet of Lord Alyn Velaryon used the Hightower's beacon to guide them during their journey toward the Sunset Sea. Alyn Oakenfist stayed at the castle with Lyonel and Sam during his visit to Oldtown.[18]

Lord Leyton Hightower, the Old Man of Oldtown, has not descended from the Hightower in more than a decade.[2]

Alekyne Florent, the attainted Lord of Brightwater, flees to Oldtown to seek refuge at the Hightower.[1]

While sailing on the Cinnamon Wind to Oldtown, Gilly is impressed with the size of Three Towers, but Samwell Tarly tells her to wait until she sees the Hightower. When they reach Oldtown, the morning fog is so thick that the Hightower's beacon is the only part of the city visible.[19]

Lord Leyton Hightower and his daughter, the Mad Maid Malora, are said to have locked themselves atop the Hightower, consulting books of spells in response to the ironborn attacks on the Reach.[19]

The distant beacon of the Hightower floated in the damp of night like a hazy orange moon.[2]

From where it stood atop the bluffs of Battle Island, its shadow cut the city like a sword.[2]