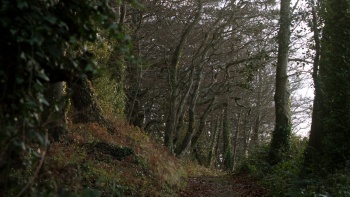 The high road in Game of Thrones

The road is wild and dangerous, climbing through rocky foothills and thick forests in the Mountains of the Moon, past high passes and deep chasms to the Vale of Arryn. Travelers on the road are often attacked by the mountain clans or shadowcats. It is often closed by snow.[4][5] In parts the high road is just a stoney track.[1]

The high road has seen much blood spilled throughout history.[6]

An army five thousand strong led by Ser Robert Rowan was sent by the Iron Throne to restore order in the Vale of Arryn after the death of Lady Jeyne Arryn. Believing the Mountains of the Moon would be passable with the coming of spring, Robert's host took the high road to enter the Vale. On the march, the column struggled through deep snows and was attacked by mountain clans.[5]

During the Great Spring Sickness, Lord Donnel Arryn ordered the Vale of Arryn sealed off, shutting down traffic from the high road and by sea, preventing the illness from spreading into the region.[7][6]

Catelyn Stark takes Tyrion Lannister captive at the inn at the crossroads. He is deceived into thinking she will take him to Winterfell, but he is blindfolded and finds they are instead on the high road to the Vale of Arryn.[1] After his trial at the Eyrie, Lady Lysa Arryn is forced to release Tyrion, but she orders her guards to escort him back to the high road.[8]

Catelyn learns that Tyrion has survived his journey on the high road, and has come back to King's Landing.[9]

King Robb Stark is hopeful his aunt, who has not cooperate with him in the war so far, would at least allow him to march his army on the high road to rejoin Gulltown, where he can take ships back to the north. According to Catelyn Stark and Brynden Tully, Lysa will refuse him.[10]

Sandor Clegane tries to bring Arya Stark to Lysa Arryn at the Eyrie, but turns back when a village elder warns them of inclement weather, shadowcats, and mountain clans.[11]

The high road to the Vale is closed by snow.[4]

Lysa: The gods have seen fit to proclaim him innocent, child. We have no choice but to free him. Guards. Take my lord of Lannister and his … creature here out of my sight. Escort them to the Bloody Gate and set them free. See that they have horses and supplies sufficient to reach the Trident, and make certain all their goods and weapons are returned to them. They shall need them on the high road.
Tyrion: The high road. As you command, my lady. I believe we know the way.[8]