From A Wiki of Ice and Fire
(Redirected from Him of Many Faces)
Jump to: navigation, search 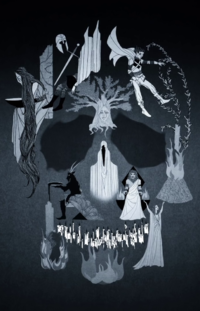 The Many-Faced God as depicted in Game of Thrones: Histories & Lore.

The Many-Faced God, also known as Him of Many Faces, is a deity worshipped by the Faceless Men, a guild of assassins established in the Free City of Braavos.

The founder of the Faceless Men came to believe that all the diverse slave population of Valyria prayed for deliverance to the same god of death, just in different incarnations. Thus, in Qohor, the Many-Faced God is called the Black Goat; in Yi Ti, the Lion of Night and in the Faith of the Seven, the Stranger.[1]

This belief of a single god with many incarnations or 'faces' came to be reflected in the Guild's House of Black and White, which contains a public shrine with idols of many death gods, including the Stranger of the Faith of the Seven.

The worshipers of the Many-Faced God believe that death is a merciful end to suffering. For a price, the Guild will grant the 'gift' of death to anyone in the world, considering the assassination a sacrament to their god. In the Guild's temple, those who seek an end to suffering may drink from a black cup which grants a painless death.

As the Faceless Men forsake their identities for the service of the Many-Faced God, they only assassinate targets they have been hired to kill and may not choose who is worthy of the 'gift' by themselves.