Holly is a wildling spearwife. 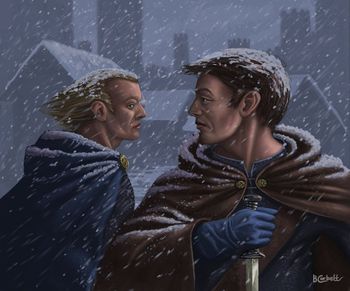 Holly accompanies Mance Rayder along with five other spearwives to Winterfell on a mission to free "Arya Stark", actually Jeyne Poole, who is to wed Ramsay Bolton. Mance disguises himself as "Abel", a singer, and the six spearwives pretend to be his mother, wife, two daughters, and two sisters, who perform the instruments with him. Holly is said to be one of the daughters. Abel and the spearwives play at the wedding feast.[3]

After several men-at-arms and squires are found dead at Winterfell, Theon Greyjoy disbelieves the spearwives' claims of innocence.[2][4] They later enlist the help of a reluctant and fearful Theon in freeing Jeyne.[2][4] The six spearwives, disguised as maids and accompanied by Theon, walk into Jeyne's room under the pretext of bringing hot water so Jeyne can have a bath. As they fight their way out of the castle, the spearwives are taken down one by one by the Bolton men. Holly is one of the last to fall, shot with arrows by guards on the walls.[4]

According to a letter Ramsay sends to Jon Snow on the Wall, Mance was captured and now wears the skins of the six women who accompanied him to Winterfell.[5]