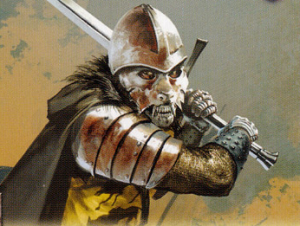 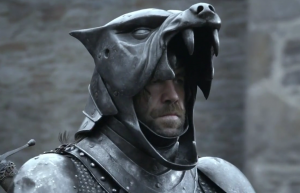 The hound helm of Sandor Clegane from Game of Thrones.

The Hound is a sobriquet for Sandor Clegane, the bodyguard of Prince Joffrey Baratheon. House Clegane's sigil depicts three black dogs,[1] and Sandor's distinctive helm is shaped like a snarling hound's head.[2]

Despite not being a knight, Sandor Clegane replaces Ser Barristan Selmy on the Kingsguard of the new king, Joffrey I Baratheon.[3]

Sandor deserts the service of Joffrey during the Battle of the Blackwater.[4] The left ear on his hound helm is sliced off during the battle and the soot-colored steel is scorched and dented.[5]

The Hound is wounded in a fight with some of the Mountain's men at the crossroads inn. Arya Stark abandons the dying Sandor along the Trident, denying him the gift of mercy.[6] 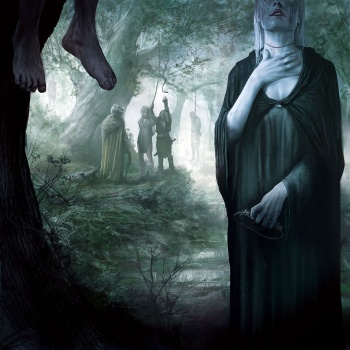 The Hound has allegedly led a hundred outlaws across the Trident,[7] although the number of men varies wildly from different reports.[8] The Red Keep worries that Sandor has joined the outlaw brotherhood of Beric Dondarrion.[9][10][11] Beric's men deny any involvement with the Hound, while Randyll Tarly encourages a connection in an effort to turn the smallfolk against Beric.[8]

Based on eyewitness reports of his helm,[12] the Hound led the savage raid on Saltpans.[8] Brienne of Tarth seeks Sandor for information about Sansa Stark.[8] Men desiring to bring the Hound to justice include Lyle Crakehall,[13] Bonifer Hasty,[12] Alyn Hunt,[8] and Kevan Lannister.[10]

At the Quiet Isle, the Elder Brother informs Brienne that the leader of the Saltpans raid could not have been Sandor Clegane. The Elder Brother says he had buried Sandor himself and placed the hound helm atop the grave, and that a traveler must have taken the helm for himself. Sandor's horse, Stranger is stabled by the brown brothers.[14]

At the crossroads inn, Brienne and her companions encounter broken men from the Brave Companions. They are led by Rorge, who had taken the hound helm from Sandor's gravesite and then led the raid on Saltpans.[15] Brienne slays this new Hound in a duel, but she is then attacked by Rorge's ally, Biter.[15] Gendry kills Biter and Brienne is taken captive by remnants of the brotherhood without banners, now led by Lady Stoneheart.[16]

Despite the objections of Thoros of Myr, Lem Lemoncloak wears the dog helm he took from Rorge's corpse. Lem supports Stoneheart in the hangings of Brienne, Podrick Payne, and Hyle Hunt.[16]

After the siege of Riverrun, Lyle the Strongboar announces he is going to hunt the Hound.[13]

At Pennytree, Jaime Lannister is approached by Brienne and told that only he can accompany her to Sansa Stark, otherwise the Hound will kill the girl.[17]

A hound will die for you, but never lie to you. And he'll look you straight in the face.[1]

A real wolf would finish a wounded animal.[6]

Brienne: You are the Hound.


Lem: I suppose I am. Seeing as how m'lady went and killed the last one.
Brienne: It was Rorge I killed. He took the helm from Clegane's grave, and you stole it off his corpse.


Lem: I didn't hear him objecting.[16]
—Brienne of Tarth and Lem

Thoros: There is nothing good about that helm, nor the men who wore it. Sandor Clegane was a man in torment, and Rorge a beast in human skin.


Lem: I'm not them.
Thoros: Then why show the world their face? Savage, snarling, twisted ... is that who you would be, Lem?
Lem: The sight of it will make my foes afraid.


Thoros: The sight of it makes me afraid.[16]
—Thoros of Myr and Lem