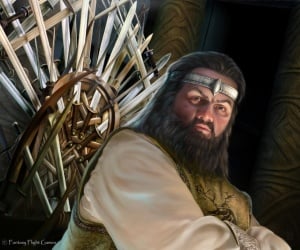 King Robert I Baratheon, when he appoints Lord Eddard Stark as Hand of the King, also offers Prince Joffrey Baratheon's hand in marriage to Ned's daughter, Sansa. Robert is mortally wounded by a boar while out on a hunt, inebriated by strongwine arranged for by his wife, Queen Cersei Lannister, who fears what he might do if he discovers the truth that her three children—Joffrey, Myrcella, and Tommen—are not his, but are the result of incestuous liaisons with her brother, Ser Jaime the Kingslayer.

The second ruler of the house, Joffrey I, uses a new coat of arms, the crowned stag of House Baratheon, black on gold, and the lion of House Lannister, gold on crimson, combatant.[1][2] However, the claim of Cersei's children to the Iron Throne is disputed by their uncles, Stannis Baratheon and Renly Baratheon. The latter is assassinated at Storm's End.

Tyrion Lannister, acting as Hand of the King, betroths his niece, Princess Myrcella, to Prince Trystane Martell in order to help avoid hostility with Dorne. King Joffrey's forces defend his House's claim to the throne against Stannis's branch of the family in the Battle of the Blackwater. After the battle, Joffrey's betrothal to Sansa is broken and he instead agrees to marry Margaery Tyrell.[3] 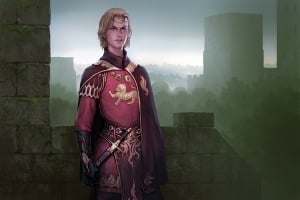 Joffrey is assassinated during his wedding feast after marrying Margaery. The Iron Throne passes to Joffrey's younger brother, Tommen I Baratheon.

The new king, Tommen I, weds Margaery[4] and continues to use the blazon introduced by Joffrey.[5] Since its current lord remains a child, the House is, for all practical matters, controlled by House Lannister.

Princess Arianne Martell plots to crown Tommen's elder sibling, Princess Myrcella, as Queen of Westeros, as she would be Joffrey's heir according to Dornish law.[6] Arianne's conspiracy is betrayed and Myrcella is wounded by Ser Gerold Dayne.[7]

After the arrest of Cersei by the Faith of the Seven, the influence of House Tyrell on Tommen increases.[8]

Houses sworn to the Iron Throne