House Corbray of Heart's Home is a noble house from Heart's Home in the Vale of Arryn. It is an old but poor house.[4] The ancestral Valyrian steel longsword[5] of the Corbrays is Lady Forlorn.[3]

They blazon their arms with three black ravens in flight holding three red hearts, on white.[5][6] Their words do not appear in the books.

The Corbrays were an Andal house during the coming of the Andals to Westeros. Corwyn Corbray conquered the Fingers by defeating Houses Brightstone and Shell, claiming for himself the title of Lord of the Five Fingers. When the First Men began to unite against the Andals, King Robar II Royce slew Qyle Corbray, King of the Fingers. The Corbrays claim that Ser Jaime Corbray killed Robar in the Battle of the Seven Stars.[3]

During the reign of King Aegon I Targaryen, his sister-wife, Queen Rhaenys Targaryen, arranged a betrothal between a Corbray and one of the triplet daughters born to the Evenstar of Tarth.[7] Ser Gawen Corbray was chosen by Aegon's other queen, Visenya Targaryen, as master-at-arms for her son, Prince Maegor, on Dragonstone. On account of his reputation as being one of the deadliest knights in the Seven Kingdoms in his day.[8]

Lord Qarl Corbray declared for Prince Aegon the Uncrowned in a conflict against his uncle, King Maegor I Targaryen. During the campaign, Aegon found himself surrounded by three armies loyal to Maegor. Lord Corbray advised Aegon to attack his foes separately before they could join their forces, but Aegon refused and continued his march towards King's Landing. Ultimately, the armies faced each other near the Gods Eye. When Aegon and his dragon, Quicksilver, were killed by Maegor atop Balerion, the Battle Beneath the Gods Eye was lost for Aegon's supporters. Lord Qarl was able to kill Ser Davos Darklyn of the Kingsguard with Lady Forlorn, however, and he survived the battle. The Corbrays were pardoned by King Maegor, but they were stripped of some lands and titles and were forced to give up hostages.[8]

When Prince Jaehaerys Targaryen took the Iron Throne in 48 AC after Maegor's death, he arrested the Commander of the City Watch and named Qarl in his stead.[9] The following year, Qarl was one of the lords who represented of the Vale of Arryn at the Golden Wedding.[9]

Jaehaerys's mother and regent, Queen Alyssa Velaryon, wanted to reward the lords who had declared for Aegon the Uncrowned by choosing a bride for Jaehaerys amongst their kin. The Corbrays were one of the Houses considered by Alyssa.[9] This idea never came to fruition, however, but Qarl remained a staunch supporter of the Queen Regent. When Lord Rogar Baratheon refused his dismissal by Alyssa from the office of Hand of the King, Qarl drew Lady Forlorn, prompting Rogar to concede. Qarl also hid Princess Aerea Targaryen under Alyssa's orders to keep Rogar's brother, Ser Ronnal Baratheon, from taking her to Storm's End with the departing Baratheon household.[10] In 58 AC, Lord Qarl advised Jaehaerys against naming Barth his new Hand due to the septon's humble origin. The following year, the deaths of Qarl and many his gold cloaks from the Shivers provoked a short period of chaos in the streets of King's Landing. Qarl was eventually replaced at the head of the City Watch by Ser Robert Redwyne.[11] 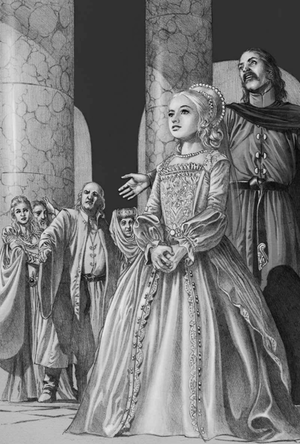 During the Dance of the Dragons, the Corbrays followed their liege lord, Lady Jeyne Arryn, and supported Princess Rhaenyra Targaryen and the blacks. Towards the end of the war, Lord Leowyn Corbray and his younger brother, Ser Corwyn Corbray, were entrusted by Jeyne to lead ten thousand men descending from the Vale towards King's Landing.[12] The Corbray brothers, along with Lady Jeyne and the Lads, took control of the city from Cregan Stark, Lord of Winterfell, but let him preside over the trials of those suspected of poisoning the late king, Aegon II Targaryen.[13]

Once the trials were dealt with and the war over, a council of regents was created to aid the young Aegon III Targaryen. Lord Leowyn was named Protector of the Realm, but Aegon's Hand, Ser Tyland Lannister, quickly achieved an unspoken dominance over Leowyn, gathering more power to himself as time passed. When the matter of Aegon's succession was brought up to the council, Leowyn favored Aegon's half-sister, Princess Rhaena Targaryen, over her older wilder twin, Princess Baela Targaryen.[14] As the regents did not desire Baela to produce an heir with her husband, Lord Alyn Velaryon, they quickly married Rhaena off to the man she chose, Corwyn Corbray.[14]

Lord Leowyn died of the Winter Fever in 133 AC, alongside his mistress and several of his servants.[14] He was succeeded as Lord of Heart's Home by his son, Quenton Corbray.[N 1] The title of Protector of the Realm was passed on Lord Unwin Peake, Aegon's Hand after the death of Ser Tyland.[14]

The following year, Ser Corwyn was named a regent after Lord Manfryd Mooton died of age and illness.[15] The year 134 AC also marked the death of Lady Jeyne Arryn and the start of a war of succession in the Vale. Corwyn was dispatched to settle the matter, but he was killed by a crossbowman at Runestone when he came to confront Lord Gunthor Royce, who supported Ser Arnold Arryn instead of Jeyne's chosen heir, Ser Joffrey Arryn. Following the death of his uncle, Lord Quenton declared for Joffrey, who was eventually installed as Lord of the Eyrie. Lord Quenton came to King's Landing in 136 AC to attend the Great Council, in which new regents were chosen for Aegon III.[16]

During the First Blackfyre Rebellion, Ser Gwayne Corbray of the Kingsguard was part of the loyalist forces that fought Daemon Blackfyre at the Battle of the Redgrass Field. They dueled for nearly an hour, their Valyrian steel swords Blackfyre and Lady Forlorn clashing loudly. At last, Blackfyre struck Gwayne's helm and left him blind and bleeding. Daemon dismounted to tend to his foe and ordered Redtusk to carry Gwayne back to the maesters for healing, an action that afterwards some considered decisive, since it gave the Raven's Teeth enough time to find a good position to fire the arrows that killed Daemon.[17]

The great-grandfather of Lord Petyr Baelish was a sellsword from Braavos who came to the Vale after being hired by a Lord Corbray.[18]

A Corbray lordling married a daughter of Benedict Royce and Jocelyn Stark.[19][20]

During Robert's Rebellion, Lyn Corbray fought Lord Jon Arryn at the gates of Gulltown, but later supported his liege lord at the Battle of the Trident.[5] In that battle, Lyn took Lady Forlorn after his father was injured, and he led a charge which broke the Dornishmen. Lyn slew the already-wounded Prince Lewyn Martell of the Kingsguard during the battle.[5]

Lyn's father gave Lady Forlorn to him upon his death, something his older brother Lyonel resented.[5] 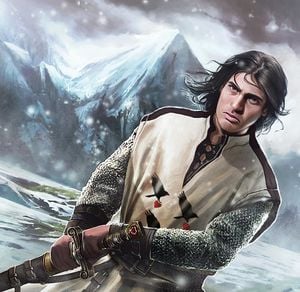 Mya Stone confesses to Catelyn Stark of being infatuated with Mychel Redfort, Ser Lyn Corbray's squire.[21] Lyn is one of the widowed Lady Lysa Arryn's suitors, and stays with her at the Eyrie for half a year after Lord Jon Arryn's death. Lyn offers himself as a champion for Lady Lysa in Tyrion Lannister's trial by battle, stating that he is the surest sword there.[22] Lysa chooses Ser Vardis Egen instead, and the older knight is slain by Bronn.[22]

When discussing the succession of Robb Stark, King in the North, his mother Catelyn recalls that the grandfather of Lord Eddard Stark had a sister who married a younger son of Lord Raymar Royce and had three daughters, one of whom married a Corbray.[19]

Lysa is angered by Lord Lyonel Corbray for asking for her son, Lord Robert Arryn, to be sent to them as a ward, and does not believe that they truly love her.[18] Leaving his new wife Lysa and Sansa Stark at the Eyrie, Lord Petyr Baelish spends four days meeting with the Corbrays.[23]

Although Lord Lyonel is content enough with Petyr's rule, Ser Lyn joins the Lords Declarant.[24] Though he is Petyr's guest at the Eyrie, Lyn draws his sword and menaces him during the parley with the Lords Declarant. Sansa discovers that Lyn had been bought by Littlefinger from the beginning, in order to undermine the Lords Declarant. Petyr confesses that he rewards Lyn for his services with "gold and boys and promises", defining him as a man of simple tastes.[5]

Petyr arranges the wedding between childless Lyonel Corbray and the daughter of a rich Gulltown merchant who provides an enormous dowry. The Lords Declarant are supposed to shun Lyonel's wedding. At the end, Lord Benedar Belmore, Lady Anya Waynwood, and Ser Symond Templeton attend, as well as Lord Gerold Grafton, Lord Jon Lynderly, and Lord Waxley.[25]

Mychel Redfort is knighted and replaced as Lyn's squire. According to Myranda Royce, the new squire is a loutish lad that Lyn took only for coin.[25]

Lyn Corbray is in attendance at the Gates of the Moon for the tourney choosing the Brotherhood of Winged Knights.[26]

House Corbray at the end of the third century

The known Corbrays during the timespan of the events described in A Song of Ice and Fire are: