House Crakehall of Crakehall is one of the primary noble houses from the westerlands.[3] Their seat, Crakehall, is located along the Ocean Road between the Sunset Sea and a large forest.[4]

Their arms depict a black and white brindled boar on brown.[5][6] According to semi-canon sources their words are "None so Fierce".[7]

Members of House Crakehall tend to be big-boned and strong.[8]

The Crakehalls are a house of First Men origin who claim descent from Crake the Boarkiller from the Age of Heroes.[2]

After defeating King Hagon Hoare, Ser Aubrey Crakehall briefly ruled as King of the Iron Islands before being drowned by the Shrike.[9]

Prince Aegon Targaryen and his sister, Princess Rhaena, sheltered at Crakehall when the Faith Militant uprising began in 41 AC.[10]

During the Dance of the Dragons, Ser Clarent Crakehall was slain in the Battle by the Lakeshore.[11]

One of the outstanding supporters of Daemon Blackfyre mentioned by Ser Eustace Osgrey was Redtusk, who could have been a Crakehall.[12] Ser Roland Crakehall was one of the three members of the Kingsguard that escorted part of the royal family to Ashford. He and his sworn brothers took part in the trial of seven on the side of Prince Aerion Targaryen.[13] Roland was one of the three Kingsguard knights who lead the loyalist forces to thwart the Second Blackfyre Rebellion.[14]

On their journey to Casterly Rock to broker the proposed marriages of Elia and Oberyn Martell with Jaime and Cersei Lannister, the Martell siblings and their mother stopped at Crakehall.[15] Along with Merrett Frey,[16] Jaime squired for Lord Sumner Crakehall against the Kingswood Brotherhood.[17] During Robert's Rebellion, Ser Elys Westerling and Lord Roland Crakehall were the first to enter the throne room of the Red Keep after Jaime slew King Aerys II Targaryen.[18]

Among the heraldry gathered for the Hand's tourney is that of a knight of Crakehall.[19] Lord Walder Frey questions his paternity over the sons of his third wife, Amarei Crakehall.[20] 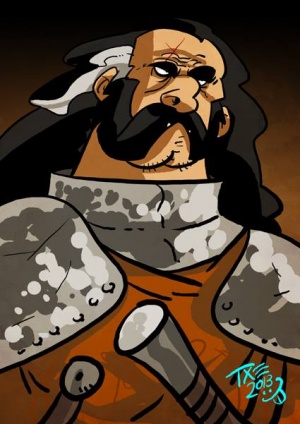 Ser Lyle Crakehall by The Mico

Little Walder Frey quarters his shield in one quarter the brindled boar of the Crakehalls, as his grandmother was Amarei.[23]

Ser Burton Crakehall boasts that he had slain Lord Beric Dondarrion until the Lightning Lord reappears, killing all the men from his column.[24]

Lord Roland Crakehall is falsely reported slain at the Battle of Oxcross.[25] Ser Lyle Crakehall, called Strongboar, is captured in the Battle of the Fords.[26]

Arya Stark spies the brindled boar of Crakehall among the banners in Tywin's army as it leaves Harrenhal.[27] Lord Roland participates in the Battle of the Blackwater.[28]

Lyle is held captive at Pinkmaiden Castle.[1] Jaime includes Strongboar among the living men stronger than him.[29]

Beric shows Arya Stark a spot above his left ear where his temple was caved in, stating that it is where Burton hit him with his mace.[30]

Ser Merlon Crakehall is one of the nobles that accompany Tyrion to welcome Prince Oberyn Martell to King's Landing.[31]

Lyle reminds Queen Cersei Lannister of her late husband, King Robert I Baratheon, and she is angry at Strongboar when he celebrates King Tommen I Baratheon's wedding by saying that "Westeros has two queens now", referring to Cersei and Queen Margaery Tyrell.[32]

The Crakehall boar is spotted among the gathered nobility that escorts the corpse of Lord Tywin Lannister back to Casterly Rock.[33]

Lyle joins Jaime's expedition to end the siege of Riverrun. During their trip, they cross a place named Sow's Horn where Ser Roger Hogg defends his towerhouse. Since Roger is a big man, Strongboar questions him about his ancestors to see if he descended from the Crakehalls.[34] After hearing of the sack of Saltpans at Darry, Strongboar insists he will slay Sandor Clegane. Lyle consoles Lady Amerei Frey, Amarei's granddaughter, and promises he will return to deal with Beric and his outlaws after Riverrun.[35]

After Jaime peacefully ends the siege at Riverrun, Strongboar is angry because he has not had the opportunity to fight. He rides back to Darry, as promised, to fight Sandor or Beric, accompanied by Beardless Jon Bettley. Jaime considers the possibility of expelling Cersei and naming as Hand of the King his uncle, Ser Kevan Lannister. If Kevan refuses, Jaime thinks of Ser Forley Prester or Roland Crakehall as alternatives.[36]

House Crakehall at the end of the third century

The known Crakehalls during the timespan of the events described in A Song of Ice and Fire are:

With unspecified familiar relationship with the lord of the house there is also:

My third wife was a Crakehall, all of the Crakehall women are sluts.[20]

Wide hips to bear children, big breasts to nurse them, strong arms to carry them. The Crakehalls have always been a big-boned family, and strong.[8]