House Dondarrion of Blackhaven is an old house from Blackhaven in the stormlands, sworn to House Baratheon of Storm's End.

Blackhaven, the castle of these great marcher lords,[3] is located in the Dornish Marches near the Boneway, controlling the pass to Dorne. Their sigil is a forked purple lightning bolt on black field speckled with four-pointed stars.[2][4][5] Their motto is unknown.

The Dondarrion line was founded when a messenger from the Storm King was ambushed by two Dornishmen while riding on a stormy night. An arrow killed his horse and his sword broke when he fell. When he thought he was doomed, a bright purple lightning bolt struck the Dornishmen, killing both. The man was thus able to deliver his crucial message on time. For this, the Storm King raised him to lordship, and he became the first Dondarrion.[2]

The Bastard of Blackhaven was killed by Meraxes during the Last Storm, one of the battles during Aegon's Conquest.[6]

Lord Simon Dondarrion was a noted musician and warrior who helped to defeat a Vulture King in the Third Dornish War.[8] A Dondarrion served as a companion to Queen Alysanne Targaryen.[9]

House Cole began as stewards in service to the Dondarrions at Blackhaven.[10]

The Dondarrions gave refuge to King Baelor I Targaryen and Prince Aemon the Dragonknight when they returned from Dorne via the Boneway.[11]

Ser Arlan of Pennytree and Duncan the Tall served Lords Caron and Dondarrion when they fought a Vulture King in the Red Mountains three years before the tourney at Ashford Meadow. Lord Dondarrion took eight hundred knights and near four thousand foot in the campaign.[2] Duncan later recognized House Dondarrion's purple lightning at Ashford. Ser Manfred Dondarrion refused to vouch for Duncan's knighthood, even after Duncan repeated the story of the family's origin and arms as he had heard it in the camp of Manfred's lord father.[2] 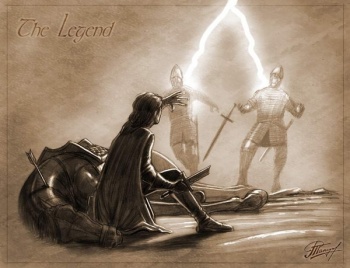 A messenger is saved by a forked bolt of lightning, becoming the first Lord Dondarrion.

Jeyne Poole becomes infatuated with Lord Beric Dondarrion when she sees him at the Hand's tourney in King's Landing. A hedge knight kills Beric's horse during the tourney. He later falls to Thoros of Myr.[12]

Beric is chosen by Lord Eddard Stark, the Hand of the King, to command the hundred men sent to capture Ser Gregor Clegane and execute him for his crimes.[13] However, Beric's company is ambushed by Clegane and Lannister men at the Mummer's Ford.[14] Beric and Thoros of Myr lead the survivors in attacking the foraging parties of Tywin Lannister.[15]

Ser Davos Seaworth meets with various storm lords to convince them to join the cause of Stannis Baratheon, but he is unable to find the missing Beric.[16] It is unknown if Beric's household at Blackhaven declares for anyone in the War of the Five Kings due to his absence.

The Mountain's men search the riverlands for a brotherhood of outlaws.[17] Ser Burton Crakehall boasts that he has slain Beric, but the lightning lord reappears not much later and Burton is himself killed.[18] 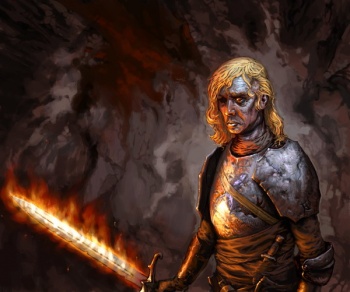 Lord Beric has been reported as killed by Ser Amory Lorch at Rushing Falls,[19] twice by Gregor Clegane, and then by Vargo Hoat and his Bloody Mummers.[19]

Arya Stark encounters the brotherhood without banners, the outlaw survivors of Gregor's attack.[20] She meets Beric Dondarrion, and witnesses him slain again by Sandor Clegane in a trial by battle. Thoros revives him, much to the surprise of Arya.[21] She learns that Beric's body was defended at the Mummer's Ford by his squire, young Lord Edric Dayne,[22] and was accidentally revived by Thoros when he performed the last kiss, a traditional burial rite.[19] Thoros confesses that he has revived Beric six times. Beric expresses being tired of living.[22]

Brienne of Tarth learns that when the brotherhood without banners encountered Catelyn Stark's corpse by the riverside, Lord Beric gave her the "kiss of life" to bring her back, and died his final death. The brotherhood is now led by the revived Catelyn, Lady Stoneheart.[23] The heir to Blackhaven is unknown.

House Dondarrion at the end of the third century

The known Dondarrions during the timespan of the events described in A Song of Ice and Fire are: