House Fossoway of Cider Hall is a noble house from the Reach, one of the principal bannermen sworn to House Tyrell.[3][6] Cider Hall is located at the fork of the Mander and the Cockleswent. Their banner is a red apple over a golden field.[1][7] Their words are "A Taste of Glory".[2]

They are commonly referred as the red-apple Fossoways, to differentiate them from the green-apple Fossoways from New Barrel, the knightly branch of the house that split from the red apples in 209 AC.[7][8]

House Fossoway is an old noble house of First Men origin from the Age of Heroes. The Fossoways claim descent from Foss the Archer, a son of Garth Greenhand renowned for shooting apples off the head of any maid that took his fancy.[5]

During the early reign of King Jaehaerys I Targaryen, Lord Martyn Tyrell was married to Lady Florence Fossoway, who increased House Tyrell's incomes by a third. When Lord Martyn served as master of coin, it was his clever wife, Lady Florence, who performed most of his duties. When Lord Oakheart held a tourney to celebrate the birth of a son, Prince Baelon Targaryen unhorsed both Fossoway twins.[9]

During the Dance of the Dragons, House Fossoway supported King Aegon II Targaryen and the greens. Owen Fossoway, Lord of Cider Hall, was a member of the Caltrops, a group of conspirators that wanted the dragonseeds Ulf the White and Hard Hugh Hammer dead. Owen was killed at the Second Battle of Tumbleton.[10][11]

The red apple of the Fossoways was spotted by Ser Duncan the Tall among the heraldry on display at Ashford in 209 AC. Ser Steffon Fossoway and his cousin Raymun both attended the tourney at Ashford Meadow, with Steffon intending to enter the lists. Raymun served as his squire until the trial of seven. After promising Duncan to take his side, Steffon revealed his intention to join Prince Maekar Targaryen and the accusers. Steffon justified himself to his cousin Raymun by alleging he would be "Lord Fossoway" at the end of the day.[12] Raymun instead supported Dunk and to mark himself on the field, Ser Raymun, newly knighted by Ser Lyonel Baratheon, repainted the apple on his shield green, founding House Fossoway of New Barrel.[7]

Ser Derrick Fossoway was an exiled knight of dark repute who was a member of the Band of Nine, later causing the War of the Ninepenny Kings.[13] 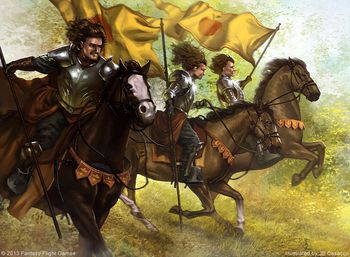 A Taste for Glory by JB Casacop © Fantasy Flight Games

The banners of the red-apple Fossoways are spotted beneath the walls of Bitterbridge. During the feast with Renly Baratheon's army which Catelyn Tully attends at Bitterbridge, Ser Tanton Fossoway climbs on the table and swears to slay Sandor Clegane in single combat.[14] During a parley, Renly boasts to his brother Stannis about having the support of the Fossoways.[15]

Both branches of House Fossoway turn to Stannis after Renly's death. Ser Cortnay Penrose acknowledges Ser Jon of the green-apple Fossoways and Ser Bryan of the red during his parley with Stannis. During Stannis's siege of Storm's End, Cortnay's lieutenant is Lord Elwood Meadows, a cousin to the Fossoways, who immediately surrenders the castle after Cortnay's death.[8]

The red apple of the Fossoways of Cider Hall is spotted amongst the banners in the vanguard of Stannis's army, led by Ser Guyard Morrigen, as it approaches King's Landing.[16] During the ensuring Battle of the Blackwater, Lothor Brune cuts his way through half a hundred Fossoway men-at-arms to capture Ser Jon from the green apple branch and slay Ser Bryan and Ser Edwyd of the red apple branch, earning the name Lothor Apple-Eater. After the battle, both branches of House Fossoway bend the knee to King Joffrey I Baratheon.[17][18]

At the royal wedding of King Joffrey and Lady Margaery, Tyrion Lannister observes a Fossoway and his pregnant wife.[21]

Brienne of Tarth spots the red apple badge of House Fossoway among those that have been collected from the dead after the battle at Duskendale.[22]

The known Fossoways from the red apple branch during the timespan of the events described in A Song of Ice and Fire are: