House Gardener of Highgarden is the extinct house of the old and famed Kings of the Reach. Beginning with the mythical first king Garth the Gardener, the Gardeners ruled, through war and peace and the assimilation with the Andals through the generations, until the last Gardener king, Mern IX Gardener, and his kin were killed at the Field of Fire in Aegon's Conquest.[1]

The kings of House Gardener initially ruled the Reach proper, focused on Highgarden and the Mander river,[2] but over time they used their claim of descending from Garth the Gardener to claim supremacy over neighboring kings and lords.[3] Their seat was Highgarden, where many Gardener kings (and one queen) sat upon a living throne called the Oakenseat.[4]

The Gardener kings wore crowns of vines and flowers when at peace, and crowns of bronze thorns (later iron) when they rode to war.[3] Their blazon was a green hand over a white field,[5][6] which inspired the chivalric Order of the Green Hand.[7]

The Gardeners claimed descent from the mythical Garth Greenhand, who, according to legends from the Reach, is said to have been the High King of the First Men and common ancestor of numerous noble houses from the Reach.[8] His firstborn child was Garth the Gardener, the legendary first King of the Reach who reigned in the Age of Heroes.[8] According to legend, Garth the Gardener made his home on the hill atop the Mander river that in time would become known as Highgarden, and he wore a crown of vines and flowers. From his loins sprang House Gardener, whose kings would rule the Reach for many thousands of years.[8] Their Oakenseat grew from an oak that Garth Greenhand himself was reputedly said to have planted.[4]

The Gardener kings initially ruled the Reach proper, although over time they expanded their territory. The western marches between Horn Hill and Nightsong were eventually added to the Gardeners' domain. Old Oak, Red Lake, and Goldengrove joined the realm with pacts of friendship and mutual defense with Garth III (the Great).[3] Meryn III brought the Arbor into the kingdom and made House Redwyne his vassals after his cousin, the last King of the Arbor, was lost at sea.[9] Not long after, King Garland II (the Bridegroom) brought House Hightower of Oldtown and their domains into the realm by wedding his daughter to Lord Lymond Hightower and putting aside his own wives to marry Lymond's daughter.[9] King Gwayne III (the Fat) resolved the quarrel between Lords Manderly and Peake and accepted fealty for their lands without bloodshed. John II (the Tall) received homage from lords and petty kings as he sailed his barge to the headwaters of the Mander.[3]

Legendary warrior kings from this time include Garth V (Hammer of the Dornish), Gwayne I (the Gallant), Gyles I (the Woe), and Gordan I (Grey-Eyes).[3] The Gardener kings often warred with the ironborn, sometimes in alliance with the Kings of the Rock and the Lords of Oldtown.[3] At least six Gardener kings died in battle against the ironborn, including Gareth II (the Grim), Garth VI (the Morningstar), and Gyles II, the last of whom was tortured to death by Joron I Blacktyde.[3][10]

The greatest of the Gardeners was King Garth VII Gardener, known as the Goldenhand, for his deeds both in war and in peace.[3] Ascending to the Oakenseat at age twelve, Garth ruled for eighty-one years, of which less than ten were spent at war. As a boy he defeated an invasion of Dornishmen by King Ferris Fowler,[3] then drove the ironborn from the Misty Islands and fortified them as the Shield Islands with men from the Reach.[11] Garth VII divided an alliance between the King of the Rock and Storm King, defeating both in the Battle of Three Armies, and he dictated the boundaries of their three kingdoms in the aftermath.[3]

Garth's greatest accomplishment was giving his people three-quarters of a century of golden peace, bringing an unprecedented prosperity. Garth's rule became known as the Golden Reign, and was when the Reach truly flowered.[3]

The Kings of the Reach observed the coming of the Andals to the Vale, the stormlands, and the riverlands from afar. Instead of allying with the invaders against other First Men, they took precautions against possible Andal invasions. King Gwayne IV (the Gods-fearing) sought aid from the children of the forest, while Mern II (the Mason) constructed a new curtain wall around Highgarden and encouraged his bannermen to do the same. Mern III (the Madling) supported a woods witch who claimed she could raise armies of the dead. The anticipated Andal attacks never occurred, however. When the disunited Andals eventually reached the realm of the Gardeners generations later, however, they were welcomed by the Three Sage Kings.[4]

The Three Sage Kings who followed one another on the Oakenseat—Garth IX, his son Merle I (the Meek), and his grandson Gwayne V—were a trio of cunning and wise kings who used a policy of accord and assimilation with the Andals rather than armed resistance. Although he continued to worship the old gods, Garth IX made a septon part of his councils and the first sept at Highgarden was built during his reign. Merle I converted to the Faith of the Seven and become its patron, helping to fund and build septs, septries, and motherhouses across the Reach. Gwayne V was the first Gardener king born into the new Faith, as well as the first to be made a knight.[4]

The Three Sage Kings took Andals into their service as knights and retainers. Ser Alester Tyrell, the founder of House Tyrell, was made Gwayne V's champion and sworn shield.[12] Merle I and Gwayne V married Andal maidens to bind their fathers to the Gardener realm.[4] The three kings also bequeathed lands, wives, and lordships for the more powerful of the Andals descending on the Reach in exchange for pledges of fealty; numerous houses of the Reach trace their ancestry back to these Andal adventurers.

The Gardeners also encouraged Andal craftsmen, specially blacksmiths and stonemasons, to settle throughout the Reach, supplying them and their bannermen with iron instead of bronze and strengthening their castles with Andal masonry. Most new lords remained loyal and helped the Gardeners against internal and external threats. Maester Yandel writes that seldom had a conquest been achieved with less bloodshed.[4]

During the minority of King Garland VI Gardener, a member of House Tyrell ruled the Reach in his name as regent.[12]

King Gyles III Gardener conquered from the Storm King all the lands north of the rainwood save for Storm's End. While he was away, the Reach was attacked by Lancel IV Lannister, forcing Gyles to deal with the westermen.[5] A new broader war followed, involving three Dornish kings and two river kings, and ended with Gyles III dead of a bloody flux and his conquests abandoned.[4]

The long reign of King Garth X, known as Garth Greybeard, witnessed the nadir of Gardener power. The elderly and senile Garth had sired only daughters, who were married to the rival Lords Manderly and Peake. Once the rival lords began warring, the Lannisters, Durrandons, and Dornish attacked the kingdom. A Dornish king sacked Highgarden, killed Garth Greybeard, and destroyed the Oakenseat.[4]

The anarchy that followed lasted almost a decade until Ser Osmund Tyrell, the High Steward of Highgarden, made common cause with the other lords of the Reach and defeated both the Peakes and the Manderlys, reclaimed the ruins of Highgarden, and supported Mern VI Gardener, a second cousin of Garth, as king. Although a man of only modest gifts, Mern VI was able to rebuild Highgarden and restore the power of the Reach and House Gardener, relying on the counsel of his stewards: Osmund Tyrell, Osmund's son Ser Robert—who was allowed to marry his youngest daughter in gratitude—and Robert's son Lorent. Mern's son Garth XI (the Painter) retaliated against the Dornish by invading the Red Mountains.[4]

Approximately a thousand years ago, Lord Lorimar Peake drove House Manderly from the Reach at the behest of King Perceon III Gardener, who feared the Manderlys' growing power in the Reach.[13] The Manderlys fled from the Mander for the White Knife in the north.[5][14][15] King Greydon Gardener attempted an invasion of Dorne, but was thrown back by Nymeria, Princess of Dorne.[16] King Garse VII was slain by the Storm King, Argilac the Arrogant, at the Battle of Summerfield.[1] 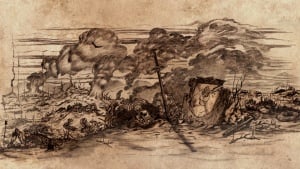 When Aegon the Conqueror invaded Westeros three centuries ago, King Mern IX Gardener joined with Loren I Lannister, King of the Rock, to put an end to Aegon's Conquest at what would become known as the Field of Fire.[1]

Mern commanded the center of the combined army and led the charge against Aegon's forces. The host of House Targaryen eventually broke, but by then Aegon and his sisters, Visenya and Rhaenys, had taken to the air on their dragons. Balerion, Meraxes, and Vhagar killed four thousand men of the combined army, among them Mern and his sons, grandsons, brothers, cousins, and other kin.[17] One nephew of King Mern survived, but he died of his burns three days later, ending House Gardener.[1]

Mern's High Steward, Harlen Tyrell, surrendered Highgarden to Aegon I Targaryen, pledging fealty. Aegon named Harlen as Lord of Highgarden, Lord Paramount of the Mander, and Warden of the South, and he granted Harlen dominion over the Reach in exchange for his submission to the Iron Throne.[18][1][19]

Most noble houses from the Reach trace their descent back to Garth Greenhand,[8] a fact that is often used to boast of a better claim than House Tyrell as the rightful rulers of the Reach, as the Tyrells were stewards who descended from the Gardeners only through the female line.[18] The green hand of the Gardeners is included in the sigils of Houses Chester and Uffering, and a white hand on green is depicted in the arms of House Oldflowers. Despite now living in the north, knights of House Manderly continue to claim membership in the Order of the Green Hand.[7][15]

Golden currency from the time of the Gardeners is still in use, albeit rare.[20][21] The coins are named hands, each worth roughly half a gold dragon,[21] and feature the hand sigil of House Gardener on one side and the likeness of the current king on the other side. They are known to have been made with Garth XII's effigy.[20]

Septon Mattheus claimed descent from the Gardener kings and was expected to be chosen as High Septon,[22] but Alfyn was elected instead in 54 AC.[23]