House Harlaw of Harlaw is one of the most powerful houses from the Iron Islands, sworn to House Greyjoy of Pyke.[3] From the castle of Ten Towers, the Harlaws rule over the entire island of Harlaw, the richest and most populous of the isles.[5] Their blazon is a silver scythe on black.[6][7]

All the other houses on Harlaw pledge fealty to House Harlaw, including Houses Kenning, Myre, Stonetree, and Volmark.[2] Cadet branches of the Harlaws are located at Grey Garden, Harlaw Hall, Harridan Hill, and the Tower of Glimmering.[2] 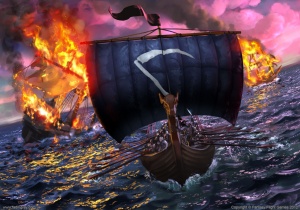 The Harlaws of antiquity were rock and salt kings on the island of Harlaw.[8] Myres and the Kennings had been their bitter foes in the past, but eventually they submitted to the Harlaws.[2]

Several Harlaws were elected as the High King of the Iron Islands through the kingsmoot. The young Erich V Harlaw recovered Fair Isle for the ironborn, but he eventually lost the island once he grew old. His son, Harron Harlaw, slew Gareth II Gardener, King of the Reach, beneath the walls of Oldtown.[4] However, the institution of the kingsmoot was put to an end by King Urron Greyiron and the Harlaws were reduced to lords.[8]

During the reign of Aegon I Targaryen, Queen Rhaenys Targaryen arranged a betrothal between a Harlaw and one of the triplet daughters born to the Evenstar of Tarth.[9]

After the death of Lord Dalton Greyjoy in 134 AC, the Harlaws and Blacktydes joined Dalton's cousins in raising up Rodrik Greyjoy, the younger salt son of Dalton, as the new Lord of the Iron Islands. Amidst the violent conflict over succession, Lady Johanna Lannister launched an invasion of the Iron Islands, landing Lannister swords and spears on Harlaw. Lord Harlaw of Harlaw was among the lords put to the sword by the invading westermen.[10]

The Harlaws' seat was Harlaw Hall until the reign of Lord Theomore Harlaw. Theomore had lost three newborn sons due to the dampness and unhealthiness of Harlaw Hall, and decided to build a better sited and more comfortable seat. Since Theomore was a changeable man, he built ten different keeps that eventually were connected by wallwalks and covered bridges, creating the castle that would be known as the Ten Towers.[2]

After the death of their father, Rodrik Harlaw became the Lord of Harlaw instead of his sister, Gwynesse, who is seven years his elder. Rodrik's sister Alannys wed Lord Balon Greyjoy.[2] Ser Harras Harlaw, the wielder of Nightfall, was a friend of Rodrik Greyjoy.[11]

When Balon Greyjoy decided to rise against King Robert I Baratheon, Lord Rodrik had unsuccessfully attempted to dissuade him. In the resulting Greyjoy's Rebellion, Rodrik's two sons died in the sea battle off Fair Isle, as did Gwynesse's husband.[2] The Iron Throne proceeded to land ships on the islands and Harlaw was among the islands that saw battle.[12]

Longships with the silver scythe of the Harlaws are seen by Theon Greyjoy at Lordsport after Balon Greyjoy calls his banners. When entering the great hall with his father's captains Theon sees some Harlaws from Harlaw.[13]

Gevin, Dykk, and at least two other Harlaws join Theon during the harrying of the Stony Shore and the capture of Winterfell. They are probably slain by Bolton men in the sack of Winterfell.[14] After the death of Balon Greyjoy, the King of the Isles and the North, and the seizure of the Seastone Chair at Pyke by Euron Greyjoy, Lord Rodrik summons lords of the Iron Islands to Ten Towers on behalf of his niece, Asha Greyjoy.[15] Hotho Harlaw brings Rodrik a copy of Archmaester Marwyn's The Book of Lost Books from Oldtown trying to gain his favor, since Hotho hopes to marry his daughter to Rodrik. Lord Rodrik offers to make Asha the heir to Ten Towers, although Ser Harras Harlaw would still become head of the house. She rejects this offer, choosing to seek the driftwood crown.[2] Aeron Greyjoy calls for a kingsmoot at Old Wyk.[15]

Lord Harlaw's Sea Song is seen on the shores of Old Wyk[16] and Aeron Greyjoy spots the Harlaw scythe among the gathered banners for the kingsmoot.[17] When speaking to Asha before the kingsmoot, Victarion Greyjoy states that Hotho, not Harras, will be Rodrik's heir.[16] Rodrik offers full support to his niece Asha during the kingsmoot. His designated heir, Harras, also supports her as one of her three champions.[17] Hotho offers his daughter to Victarion and supports him,[16] but he is one of the first to shout Euron's name after he reveals his plans.[17]

Rodrik, Harras, and Hotho are part of the taking of the Shields commanded by King Euron. Hotho reports how Harras planted his standard beneath the Grimm castle and defied them to single combat. After seven champions had been defeated, Lord Guthor Grimm's septon decided the gods had spoken and surrendered Grimston.[11]

Victarion sees Lords Rodrik Harlaw, Gorold Goodbrother, and Dunstan Drumm talking at the yard of Oakenshield Castle. The three share their fear of a Tyrell reprisal. Harras is named Lord of Greyshield by Euron, a move Victarion interprets as a way to gain his loyalty at Rodrik's cost. This also makes Hotho the new heir to Ten Towers.[11]

House Harlaw at the end of the third century The known Harlaws during the timespan of the events described in A Song of Ice and Fire are:

With unspecified familiar relationship to the main branch there are also:

Harlaw was not the largest of the Iron Islands, but it was the richest and most populous, and Lord Rodrik's power was not to be despised.[2]

Asha: I need you to raise the men of Harlaw.
Rodrik: The men of Harlaw are here. The ones who count. Some were shouting Euron's name. I will not set Harlaw against Harlaw.[18]