From A Wiki of Ice and Fire
Jump to: navigation, search
"Umber" redirects here. For the archmaester, see Umbert.

House Umber of the Last Hearth is a noble house from the Last Hearth in the north. Lord Jon Umber, called "the Greatjon", is sworn to House Stark of Winterfell. The Umber sigil is a roaring giant, brown-haired and wearing a skin, with broken silver chains, on flame-red.[3]

Although the Umbers deny it, Roose Bolton claims they still practice the tradition of the lord's right to the first night, which was banned during the reign of King Jaehaerys I Targaryen.[8]

The Umbers control land along the Bay of Seals, south of the New Gift and extending west to the kingsroad. Their lands include the northern Last River and the Lonely Hills. The kingsroad runs along the western marches of Umber territory for a hundred leagues.[9] Most of their land is east of the kingsroad, but the Umbers graze their sheep in the high meadows of the northern mountains in summer.[10]

The Umbers control forests of tall pine and old oak.[6] House Umber is an ancient house who once ruled as First Men kings. After many struggles, the Umbers were reduced from royals to vassals of House Stark, the Kings of Winter.[11] Amongst other possibilities, the Night's King is rumored to have been an Umber.[12]

The Umbers' proximity to the Wall puts them at risk of wildling raids and they have often been called upon to help defend the north against wildling raiders.[13] The Umbers joined the Starks in defeating Gendel and Gorne, brother Kings-Beyond-the-Wall,[14] three thousand years ago.[15]

Queen Alysanne Targaryen and Silverwing visited the Umbers at the Last Hearth in 58 AC.[16]

During Robert's Rebellion, the Umbers followed Lord Eddard Stark to war, with Mors's sons dying at the Battle of the Trident.[9] 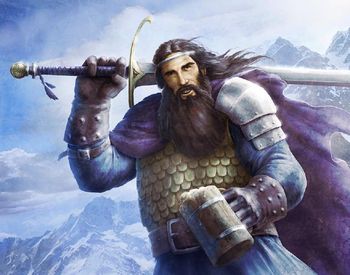 After Lord Eddard Stark's arrest in King's Landing, House Umber answers Robb Stark's call to arms, with Umber men led by the Greatjon following him south, leaving his uncles Mors Crowfood and Hother Whoresbane in command at the Last Hearth. Despite an initial row at Winterfell, the Greatjon becomes one of Robb's strongest supporters and fiercest battle commanders.[18] Lord Umber's eldest son, the Smalljon, rides as one of Robb's personal guard.[19]

When the Stark host quarters at Moat Cailin on their march south, the Last Hearth men garrison in the Children's Tower.[20] During the battle in the Whispering Wood, the Greatjon has an independent command,[19] and in the subsequent Battle of the Camps he rides in from the west with the Mallisters and sets fire to the Lannister siege towers.[21]

Following the death of Ned Stark, House Umber supports Robb as his heir, with the Greatjon proclaiming him the King in the North while they are at Riverrun.[22]

The Umber men in the south accompany King Robb on his campaign in the westerlands. The Greatjon captures several gold mines after the Battle of Oxcross,[23] and the Smalljon leads men scaling the walls during the storming of the Crag.[24]

Lord Umber's uncles attend the harvest feast at Winterfell. Hother requests ships to fight wildlings in the Bay of Seals, and is told to work with Lord Wyman Manderly to build a fleet. Mors puts himself forward as a match for the widowed Lady Donella Hornwood, but is rejected.[6]

After Theon Greyjoy leads the capture of Winterfell by ironborn, he tells his sister Asha that the Umbers are gathering beyond the Last River to help liberate the Stark seat.[25] Theon does not see any Umbers in the army of Ser Rodrik Cassel prior to the battle at Winterfell, however.[26]

The Greatjon and the Smalljon return with King Robb Stark's army to the riverlands from the westerlands. Lord Umber and his men subdue Lord Rickard Karstark after he murders two captive Lannister squires, Willem Lannister and Tion Frey, at Riverrun, with two Umber men being wounded in the process. The Greatjon punches Rickard when the other bannerman calls Robb "boy", and hangs the other seven Karhold men who took part.[27]

The Greatjon leads Robb's van during the journey from Riverrun to the Twins for the wedding of Lord Edmure Tully to Roslin Frey.[28] At the Red Wedding, the Greatjon becomes drunk, competing with Ser Whalen Frey and Merrett Frey. It takes eight men to subdue him, of whom he kills one, injures two others, and bites half an ear off Ser Leslyn Haigh.[29] The Greatjon is captured and imprisoned at the Twins, and his heir, the Smalljon, is murdered by Bolton or Karstark men while trying to protect Robb.[30] It is unknown who the current heir is.

Maester Aemon sends a raven to the Last Hearth in a plea for help to defend Castle Black from wildlings.[31] 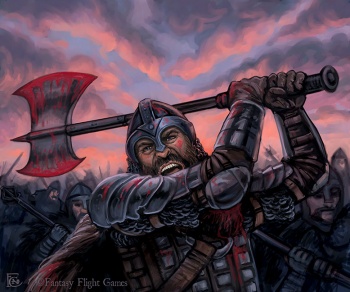 Queen Regent Cersei Lannister informs the small council of King Tommen I Baratheon that Umbers have joined Ramsay Bolton in the effort to remove ironborn from Moat Cailin. Ramsay's father, Lord Roose Bolton, has been named Warden of the North in House Stark's stead.[32]

With the Greatjon still imprisoned at the Twins,[34] Hother Whoresbane leads half the remaining Umber men under the Bolton banner, although Roose considers them untrustworthy.[35] Mors Crowfood has joined the cause of Stannis Baratheon, who is liberating the north from Bolton and Greyjoy alike.[36] Mors makes it clear that Umber will not fight Umber for any cause.[9]

Hother leads three hundred spears and a hundred archers south to Moat Cailin.[37] He later commands the Umber contingent at Winterfell for the wedding of Ramsay Bolton to "Arya Stark" (actually Jeyne Poole).[38]

The Umber men with Mors camp outside of Winterfell and blow horns to disorient Roose's forces. After they escape from Winterfell, Theon Greyjoy and Jeyne are brought by Mors to the crofters' village.[36]

Theon reveals to Stannis that Ser Aenys Frey was killed when Frey forces rode into pits dug by Mors Crowfood's men. The troops with Mors are green boys while those with Hother are greybeards.[5]

House Umber at the end of the third century

The known Umbers during the timespan of the events described in A Song of Ice and Fire are:

The blast of horns woke him. Bran pushed himself onto his side, grateful for the reprieve. He heard horses and boisterous shouting. More guests have come, and half-drunk by the noise of them. Grasping his bars he pulled himself from the bed and over to the window seat. On their banner was a giant in shattered chains that told him that these were Umber men, down from the northlands beyond the Last River.[6]

The Greatjon's the Young Wolf's strong right hand, all know that to be true. Who better to protect the widow's lands than an Umber, and what Umber better than me?[6]

The Umbers may seem simple, but they are not without a certain low cunning.[8]

Jon: Your Grace, might I know if the Umbers have declared for you?


Stannis: Half of them, and only if I meet this Crowfood's price. He wants Mance Rayder's skull for a drinking cup, and he wants a pardon for his brother, who has ridden south to join Bolton. Whoresbane, he's called.


Godry: What names these northmen have![9]
—Jon Snow, Stannis Baratheon, and Godry Farring