House with the red door 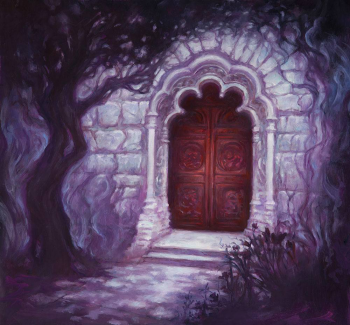 The house with the red door - Kristina Carroll. © FFG

The house with the red door was Daenerys Targaryen's childhood home in the Free City of Braavos. The house is the closest thing to home that she has ever known. As a young child Daenerys and her brother Viserys Targaryen lived in this house, under the care of Ser Willem Darry. She had her own room there and a lemon tree outside her window.[1]

According to Daenerys it was a big house.[1] One of its rooms had great wooden beams with carved animal faces adorning them. The lemon tree could be seen outside a window from that room.[2]

After Ser Willem's death, the servants stole what little money they had left. Soon after, Daenerys and Viserys were put out of the house. Daenerys cried when its red door was closed to them forever.[1]

Daenerys longs for the house in Braavos, as its red door has become symbolic to her. It is unknown if the house is still standing. 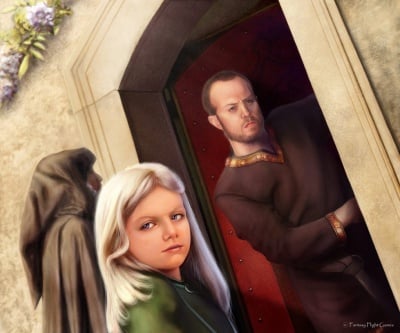 Young Daenerys Targaryen outside the house with the red door in Braavos - by Tiziano Baracchi. © Fantasy Flight Games

In Magister Illyrio's manse, before Daenerys begins her preparations for her introduction to her prospective husband, Khal Drogo, she thinks longingly of the house with the red door.[1]

Upon meeting Khal Drogo, Daenerys, afraid, asks her brother Viserys to go home. Viserys, angry, replies that Drogo is their way home, to Westeros. Daenerys, who had meant Magister Illyrio's estate, thinks to herself that "not even the house with the red door" had been a true home for Viserys.[1]

On the Dothraki Sea, Ser Jorah Mormont talks with the newly wedded Daenerys. When Dany asks Jorah what he prays for he tells her in a voice thick with longing "home". She replies that she prays for home too. He laughs and tells her to look around her, at the Dothraki Sea, but it is not the great plains that Dany sees at that moment. Instead, she thinks of King's Landing and the great Red Keep, built on the command of Aegon I Targaryen, her ancestor. She thinks of Dragonstone, the place of her birth. And in her thoughts, all the doors were red.[3]

At Vaes Dothrak Ser Jorah promises Dany that one day they will go home. Dany wonders what represents home to her. "A few tales, names recited as solemly as words of a prayer, the fading memory of a red door...".[4]

On the Western Market in Vaes Dothrak, the flasks of scented oils remind Daenerys of her childhood and the house with the red door.[4]

In the Red Waste, during her recovery after giving birth to her stillborn son, Dany sees the house with the red door in her fever dreams. She tries to reach it, but is unable to do so.[5]

In Qarth, at the behest of Pyat Pree, Daenerys Targaryen goes to seek answers in the House of the Undying. Inside, she passes through many rooms containing visions before she reaches the chamber of the Undying Ones.[2] One of the open doors she passes contains a vision of a room from the big house with the red door. She recognizes the great wooden beams, with the carved animal faces on them, and sees the lemon tree outside of the window, as well as Ser Willem Darry. While she wants to enter the room, she knows that Darry has been dead for years, and that the vision is false. Instead, she backs away and runs.[2]

An evening shortly after the conquest of Meereen, Daenerys Targaryen is looking out over the city from her terrace. When found by one of her servants, Missandei, she is asked what she is doing. Daenerys replies that she was looking for a "house with a red door", but she did not find it, as by night, all doors are black.[6]

Daenerys Targaryen is dreaming of a house with a red door when she is woken by Missandei with the news of the murder of Stalwart Shield.[7]

Later, Daenerys is dreaming that she and Daario Naharis are man and wife, simple folk living a simple life in a tall stone house with a red door, when her handmaiden Irri wakes her with the news that nine Unsullied, including Mossador, the brother of Missandei, have been murdered by the Sons of the Harpy[8]

When Daenerys talks to Ser Barristan Selmy, she thinks to herself that she had never known a home. "In Braavos, there had been a house with a red door, but that was all".[9]

As Daenerys is examining the parchment containing the marriage pact that Prince Quentyn Martell had brought to her, she realizes that it had been signed in Braavos, while they had been living in the house with the red door. The realization makes Daenerys feel strange, and she wonders why.[10]

As she is readying herself to attend the opening of Daznak's Pit, Daenerys Targaryen thinks to herself that she would rather have drifted in her fragrant bathing pool all day, eating iced fruit off silver trays and dreaming of a house with a red door.[11]

Wandering alone through the Dothraki Sea, Daenerys reflects on the life she had had with Khal Drogo. Not since those "half-remembered days in Braavos" when she had lived in the house with the red door, had she been as happy as she had been with Drogo, and her unborn son who, according to the dosh khaleen, would be the Stallion Who Mounts the World. In the Red Waste, however, all her joy had turned to ashes.[12]