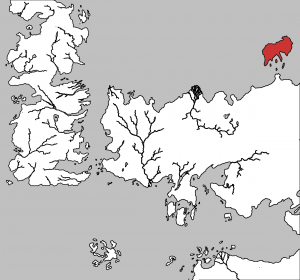 Location of Ibben in the known world

Ibben[1] is an island nation in the Shivering Sea, which is the polar sea north of the eastern continent, Essos.[2]

The nation of Ibben consists of several islands and settlements on the mainland of Essos. The largest island is Ib, a forested and mountainous isle containing the cities Port of Ibben and Ib Nor. South of Ib are scattered islands in the Bay of Whales, while another smaller island is located directly to the north. Southeast of Ib is a moderately-sized mountainous island called Far Ib, containing the city Ib Sar.[8]

South of the Ibbenese islands on the mainland of Essos is the city of New Ibbish, situated on a forested peninsula north of the Kingdom of the Ifequevron. Southeast of New Ibbish are the ruins of Ibbish, now known by its Dothraki name, Vaes Aresak.[8][10]

According to George R. R. Martin, "if you visualize Westeros as a big Britain and the eastern continent as mainland Europe, Ibben is kind of up where Finland would be... except there's no Scandinavia, nothing north of the Baltic except ocean.".[1]

Different from the other races of mankind,[7], most Ibbenese live on Ib and the smaller islands surrounding it, with a few colonies on the mainland of Essos.[9] When people from other lands visit Ib, they are restricted by law and custom to the harbor precincts of the Port of Ibben. They are only allowed to venture beyond the city in the company of an Ibbenese host, but such invitations are rarely made.[7]

Ibben was ruled by a God-King until the Doom of Valyria. Now the power lies in the Shadow Council, whose members are chosen by the Thousand, an assembly of wealthy guildsmen, ancient nobles, priests, and priestesses, similar to the magisters of the Free Cities.[7]

Gold, iron, and tin are abundant in the mountains of Ib, whereas timber, amber, and hundreds sorts of pelts can be found in the island's forests. Whale bone, blubber, and oil are Ib's chief stock-in-trade.[7] Among Ib's trading partners are Lorath[4], Braavos,[11] the Summer Isles and Volantis.[7] Before its destruction, Ibben also traded with the Kingdom of Sarnor.[6]

Ibbenese are mostly known as whalers, piloting fat-bellied whaling ships with hulls black with tar.[7][12][13] These ships are a common sight in the ports of King's Landing,[12], Oldtown,[14] the Summer Isles, and Volantis.[7] Whalers and sealers often venture into Lorath Bay, as Lorath does not have enough military strength to prevent them from doing so.[4]

The Ibbenese are one of the few peoples to sail the eastern waters of the Shivering Sea.[15]

The so-called Hairy Men were possibly the forebears of the Ibbenese.[6] The Port of Ibben is said to have ruled the Ibbenese since the dawn of days.[7]

Dragons likely once lived on Ibben, as dragonbone has been found on the island Ib.[16]

Lorath, before it became a Valyrian settlement, was for a while inhabited by a dark, small, hairy people akin to the men of Ib.[4] After the followers of Boash had settled in Lorath and the city became a daughter of Valyria, men from numerous lands, including Ib, traveled there.[4] Likewise, before the Valyrians settled in Norvos, other people lived in the city. While most consider them to have been Andals, there are some who believe them to have been cousins of the men of Ib.[5]

Evidence of Ibbenese settlements has been found on the Axe, the Lorathi isles, along the shores of the Bitterweed Bay, the Bay of Tusks, the Leviathan Sound, and the Thousand Islands.[7] Ib has often fought with Lorath over the supremacy of the waters of Bitterweed Bay.[19] Although Norvos claims dominion over the Axe, the Ibbenese often violently dispute this claim.[5]

Before the Andals came to Westeros, the White Knife in the north was frequently attacked by raiders and slavers. Some scholars believe these raiders were the forebears of the men of Ib.[3]

At least a hundred God-Kings are said to have ruled from a massive stone castle in the Port of Ibben.[7]

The Ibbenese sent their most notorious criminals to Ib Sar, the only town on Far Ib. These criminals were often mutilated first, so they might never return to Ib. This practice came to an end after the fall of the final God-King, although Ib Sar has not been able to lose its unsavory reputation.[7]

The Kingdom of Sarnor was a trading partner of Ibben,[6] although the Ibbenese attempted on several occasions to seize control of the mouth of the Sarne, resulting in war with the Sarnori settlements Saath and Sarys.[7]

The Ibbenese eventually succeeded, under leadership of the God-Kings, in gaining a foothold on the mainland of Essos. They conquered the Kingdom of the Ifequevron, although whether the Ibbenese extinguished the Ifequevron or not is a matter of dispute. While some claim the Ibbenese killed the race, others simply believe the so-called "wood walkers" went into hiding or fled. At the height of its power, the land the Ibbenese controlled on the mainland of Essos was as large as Ib itself. The rich dominion of Ibbish allowed it to grow into a thriving port and the second city of Ibben.[7]

Some of the slaves who escaped the grasps of the Valyrian Freehold and founded Braavos were Ibbenese.[11] While still keeping its location and existence a secret from the world, Braavos began to trade with Ib.[11]

After the destruction of most of the Sarnori cities by the Dothraki during the Century of Blood, the aftermath of the Doom of Valyria, Saath remained as the only Sarnori settlement. This diminished city mostly survives due to the support given by Ib and Lorath.[6]

Near two hundred years ago, Dothraki khals began to attack the Ibbenese lands on mainland Essos, leading to numerous battles. Ibben won a famous battle against Khal Onqo, but were pushed further and further back by the Dothraki as khalasar after khalasar came. Khal Scoro took Ibbish for the first time, and although the Ibbenese rebuilt the city, a generation later Khal Rogo arrived to put half the city to the torch.[7]

Eventually, Onqo's grandson, Khal Dhako, arrived at the city, ready to sack it. Learning of his approach, the inhabitants of Ibbish fled across the sea back to Ib. Considering them cowardly, an infuriated Dhako put the city and much of the surrounding land to the torch, resulting in the loss of most of the lands the Ibbenese had ruled on the northern coast of Essos.[7][6] Following the destruction of Ibbish, the Ibbenese constructed a new town, New Ibbish.[20] From this colony, built on a peninsula protected by great wooden walls, the Ibbenese rule over their modest remaining foothold in Essos.[7]

The last of the God-Kings was thrown down in the aftermath of the Doom.[7]

Rule over the isles of Ibben is now held by the Shadow Council.[7]

It is said that Euron Greyjoy's reputation is known from Ibben to Asshai.[21][22]

When confronting Queen Cersei Lannister about the fact that he has discovered the truth about the paternity of her three children, Lord Eddard Stark advises her to take ship for the Free Cities, the Summer Isles, or the Port of Ibben.[23]

When mistakenly believing that his half-sister, Arya Stark, is held at Winterfell, Jon Snow considers numerous locations to which he could send her after she is rescued, including the Port of Ibben.[24]