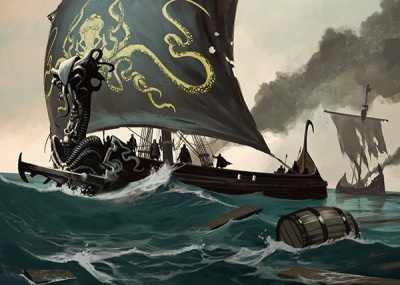 During the War of the Five Kings, Victarion Greyjoy leads the Iron Fleet to the Fever River before the fall of Moat Cailin.[1] 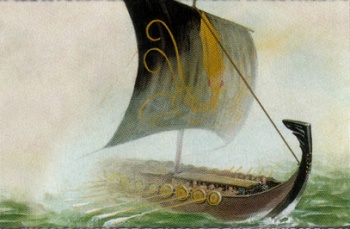 Victarion sails back to the Iron Islands after learning of the death of his oldest brother, Balon Greyjoy, King of the Isles and the North.[3]

After Victarion loses to his elder brother Euron at the kingsmoot on Old Wyk,[4] the Iron Victory takes part in the ironborn's taking of the Shields. It rakes and boards at least one ship, a smaller one belonging to House Serry, capturing it.[2]

Iron Victory leads part of the Iron Fleet to Slaver's Bay to retrieve Daenerys Targaryen and her dragons. The Iron Victory is boarded by monkeys from the Isle of Cedars, while the dusky woman stays in Victarion's cabin.[5] The ship captures a merchant vessel, Noble Lady, off the coast of Dorne,[5] and joins Grief and Warrior Wench in capturing the Willing Maiden north of Yunkai.[6]

Victarion spares the life of the shipwrecked Moqorro, and the red priest promises to heal the captain's wounded hand. The crew report wild laughter and Maester Kerwin describes High Valyrian singing while Moqorro performs a ritual in Victarion's cabin. Afterward, Victarion orders his crew to kill the ineffectual Kerwin and toss his body from Iron Victory.[5] Moqorro kindles fires on the forecastle each night.[6]