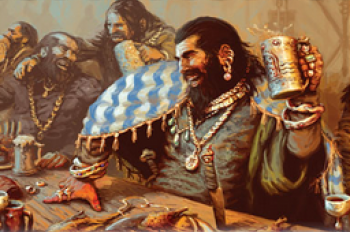 The iron price in ironborn culture refers to warriors acquiring possessions by taking them from defeated adversaries, rather than purchasing items with currency, which is referred to as the gold price.[1] It is closely associated with the ironborn's Old Way of raiding and reaving. Thralls and salt wives are acquired only through reaving, never through transactions.[2]

Lord Balon Greyjoy accuses his son, Theon, of having paid the gold price for a necklace instead of the iron price. When Theon admits to having purchased it, Balon drops it into a fire. Balon declines King Robb Stark's offer of being named King of the Iron Islands, instead having decided to claim a crown himself by paying the iron price and attacking the North.[1]

After the Battle of the Stony Shore, Theon's crew take valuables from the slain Wild Hares. Dagmer Cleftjaw owns numerous rings and gemstones that he has taken from his opponents.[3]

Baelor Blacktyde is opposed to the Old Way and the iron price, as the Greyjoy Rebellion during the reign of King Robert Baratheon was unsuccessful.[4]

During the Iron Fleet's voyage to Slaver's Bay, Lord Captain Victarion Greyjoy pays the gold price for food and water in Volantis, but he considers himself shamed by doing so.[5] He also sends Red Ralf Stonehouse with the swiftest ships to pay the iron price for provisions by raiding towns in the Basilisk Isles. However, only nine of the ships reconvene with Victarion at the Isle of Cedars, with Ralf himself gone missing.[5]

In the Old Way, only women decorated themselves with ornaments bought with coin. A warrior wore only the jewelry he took off the corpses of enemies slain by his own hand. Paying the iron price, it was called.[1]

That bauble around your neck—was it bought with gold or iron?[1]

I am the Greyjoy, Lord Reaper of Pyke, King of Salt and Rock, Son of the Sea Wind, and no man gives me a crown. I pay the iron price. I will take my crown, as Urron Redhand did five thousand years ago.[1]