The ironborn are the natives of the Iron Islands in the Sunset Sea off the western coast of Westeros. They are also known as ironmen,[1] especially by those they raid.[2] The men from the green lands of Westeros also call them squids[3] as the isles are ruled by House Greyjoy, whose sigil is a kraken.

While it is often believed the Iron Islands are named after their deposits of ore, the ironborn insist their lands are instead named after their people's fierce, hard, unbending nature.[4] The ironborn of old prided themselves on their fierceness in battle and their sacred freedoms.[2] The ironborn are a people of the sea and are loath to go too far from the waters. Their captains are proud and willful,[1] and are considered to be a king aboard their own ships.[5][4] It is forbidden for ironborn to spill the blood of other ironborn, but drowning is acceptable by some.[6]

Literacy remains rare in the Iron Islands to this day; those who are literate are often mocked as weaklings or feared as sorcerers.[4]

Similar to the northern mountain clans, some heads of noble houses in the Iron Islands do not use the title "lord", but are referred to only by their house name, such as "the Sparr"[6] and "the Stonehouse".[7] Amongst his many titles, Balon Greyjoy includes "the Greyjoy".[1] Aeron Greyjoy refers to Meldred Merlyn as "the Merlyn", while Meldred styles himself "Lord" in the manner of the green lands of mainland Westeros.[6]

Prominent ironborn who have greater connections with the mainland are more likely to be attended by maesters, singers, and knights than they are by thralls or salt wives.[7] The Old Way is the term used by the ironborn to refer to their ancient tradition of reaving and plundering. In the Old Way, the ironborn took whatever they wanted, be it wealth, women, or glory,[1] and their reavers were feared all over.[8] Ironborn considered this "paying the iron price".[1]

The Old Way came to an end when King Aegon I Targaryen burned King Harren Hoare to death at the burning of Harrenhal during Aegon's Conquest.[1][9] Sporadic attempts have been made by the ironborn to restore the Old Way to the islands, such as by Lords Dagon[10] and Balon Greyjoy,[1] but all have failed. Some ironmen still yearn for its return, however.[4][11]

The ironborn worship a deity called the Drowned God. The religion dates back to before the coming of the Andals, although the Andals made multiple attempts to supplant it with the Seven, all have failed.[12]

The ironborn believe they come from the watery halls of the Drowned God and that their deity created them in his likeness[4] to reave, rape, carve out kingdoms, make their names known in fire and blood and song,[1] and to hold dominion over all the waters of the earth.[4]

The Drowned God has no temples, holy books, or idols.[4] Priests of the Drowned God constantly wander the Iron Islands without a permanent home, although they never go far from the sea. The lords and peasants on the islands are obliged to give them food and shelter.[4] The priests can wield considerable power over the ironborn.[4] Important aspects of the religion of the Drowned God include drowning a man and then bringing him back with the kiss of life, blood sacrifice using thralls,[13][14] or sacrificing a person by drowning him, preferably in salt water.[10][15][5] Their acolytes are known as drowned men.[6]

When an ironman dies, his body is committed to the sea. The ironborn believe that “no true son of the sea would want to rot beneath the ground” as it would make him unable to find the Drowned God's watery halls.[16] It is believed the deceased can drink and feast in these halls for all eternity,[16][6] with mermaids attending his every want.[6]

Captives taken during raids become thralls bound to their captors in service. Unlike the slaves in the Free Cities, these thralls are no man's property. They are allowed to marry and have children, who, if born on the Iron Islands, are considered to be ironborn.[16][4]

Most male thralls are set to work in the fields or the mines, tasks the ironborn consider to be done by “lesser men”, for their entire lives – although the situation in the mines usually results in a shorter life-span. Thralls who are able to read, write, and do sums are instead set to work as stewards, tutors, and scribes. Skilled craftsmen, like stonemasons, are considered to be of even more value.[4] Older women are made into scullions, cooks, seamstresses, weavers, or midwives, although they are not often taken on raids. Fair maidens and girls near their first flowering are most often taken captive on raids, becoming serving girls, whores, or household drudges upon the isles.[4]

The fairest of the young girls taken as thralls are made into salt wives by their captors.[4] In a ceremony performed by a priest of the Drowned God, the girl and her captor were “wed”.[1][4] A man can join himself to multiple salt wives, the number of which speaks to his power, wealth, and virility.[4] The children born from such a marriage are not considered to be bastards, but instead can inherit should their father have no surviving sons by his true, freeborn rock wife from the Iron Islands.[4] The ironborn pride themselves on their fierceness in battle and their sacred freedoms.[2] They are a seafaring people, and esteem those who sail the seas, especially their reavers.[4] In the past, raiders from the Iron Islands were considered to be the “terrors of the sea”.[2] They were called the "wolves of the sea" by the men of the westerlands and riverlands, as they sailed the seas in “packs” with their longships.[4] The sailing ironborn are not afraid of drowning and thus dress in armor while in battle at sea.[16] Most ironborn prefer to fight on foot or from the deck of their ship.[5] They are more comfortable on the deck of a longship than in the saddle of a horse,[17] and they are known to lack the discipline to stand against the charge of armored horse.[18]

Each ironborn lord can float about a hundred ships. However, their vessels are smaller and simpler than the other ships of the Seven Kingdoms. George R. R. Martin has compared their size to Viking longboats.[19]

There are few knights from the isles because most ironborn do not follow the Faith of the Seven. Known ironborn knights include Ser Harras Harlaw[22] and Ser Aladale Wynch.[23] 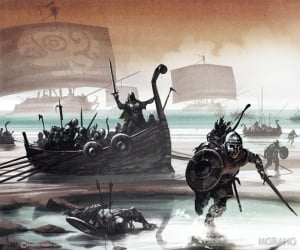 The most accepted origin for the ironborn states they descend from First Men who settled upon the Iron Islands thousands of years ago. Their Seastone Chair, carved from oily black stone, is said to have been found on the shores of Old Wyk when they first arrived.[4] Somewhat isolated from the rest of Westeros, the ironborn created their own religion based around the Drowned God. According to their priests, the ironborn came from beneath the oceans and are more kin to fish and merlings than the rest of mankind. Archmaester Haereg theorized that the ancestors of the ironborn came from a land west of the Sunset Sea.[4]

The salt kings and reavers who raided the shores of the Sunset Sea in antiquity are fondly remembered by singers and priests.[4] The First Men of the mainland did not have a strong seafaring tradition, so the ironmen controlled the seas from the Frozen Shore to the Arbor.[4] It is said that the ironmen of old had oft been blood-drunk in battle, so berserk that they felt no pain and feared no foe.[5]

According to legend, the ironborn of old were ruled by the Grey King during the Age of Heroes. After his death, his hundred sons killed each other in order to determine who should succeed him. The sixteen who eventually remained divided up the islands between them.[24]

According to the oldest surviving records at the Citadel of Oldtown, each of the Iron Islands was ruled by two kings: a rock king who ruled the island, and a salt king who held the command at sea. These kings were chosen in a kingsmoot, called for by a priest of the Drowned God whenever a king died. Eventually, a High King of the Iron Islands was chosen via kingsmoot to rule over all of the ironborn.[24] While previous generations usually raided the mainland and then returned to the islands, the driftwood kings began to conquer territory on the mainland.[24]

Kings of the Iron Islands The ironborn eventually declined, however, as dynasties such as the Gardeners and Lannisters grew more powerful. Many ironborn conquests were lost to the mainland, and House Greyiron eventually claimed the throne as hereditary Kings of the Iron Islands.[24][25]

The coming of the Andals brought the Faith of the Seven to the ironborn. While some ironmen converted, this new religion did not fully take hold and worship of the Drowned God continued.[26] The Greyirons were eventually overthrown by an alliance of Andal and ironborn families, with House Hoare claiming the throne with Andal support.[25]

Many Hoare kings sought closer relations with the mainland, bringing the dynasty into conflict with priests of the Drowned God. Since the Westerosi kingdoms had grown stronger, daring ironborn sailors reaved as far away as the Basilisk Isles, Stepstones, and the Disputed Lands.[27]

Harren Hoare was King of the Isles and the Rivers when King Aegon I Targaryen arrived in Westeros and began the Conquest by House Targaryen. The ironborn were thrown back to their islands when House Hoare was extinguished in the burning of Harrenhal.[27][28][2] Following Aegon's conquest of the Iron Islands, Lord Vickon Greyjoy was chosen by the surviving ironborn lords to have primacy over them.

The ironborn have been guided by House Greyjoy since then and have been mostly-peaceful subjects of the Lord of the Seven Kingdoms and the Iron Throne for almost three hundred years,[11] aside from reavings by Lords Dalton[29] and Dagon Greyjoy,[30][31] although none of them could ever be called a leal and faithful servant to the Iron Throne.[32] In 289 AC the ironborn revolted in Greyjoy's Rebellion, led by Lord Balon Greyjoy, in an attempt to restore the Old Way. However, the rebellion was crushed by King Robert I Baratheon,[1][32][33] and Balon's new Iron Fleet was defeated by Lord Stannis Baratheon.[6]

Balon Greyjoy, Lord of the Iron Islands, declares independence from the Iron Throne and orders the ironborn to attack the north.[17][5] Balon styles himself King of the Isles and the North after the capture of Winterfell.[35]

Balon falls to his death at Pyke.[36]

Aeron Greyjoy calls for a kingsmoot at Old Wyk to decide Balon's successor.[6] After winning the support of the gathered ironmen,[7] Euron Greyjoy sends them to attack the Shield Islands[16] and the Mander.[37]

Euron sends Victarion Greyjoy to retrieve Daenerys Targaryen and her dragons from Meereen with the Iron Fleet.[13]

You may dress an ironman in silks and velvets, teach him to read and write and give him books, instruct him in chivalry and courtesy and the mysteries of the Faith, but when you look into his eyes, the sea will still be there, cold and grey and cruel.[32]

War was an ironman's proper trade. The Drowned God had made them to reave and rape, to carve out kingdoms and write their names in fire and blood and song.[1]

It was said that the ironmen of old had oft been blood-drunk in battle, so berserk that they felt no pain and feared no foe.[5]

The ironborn are a race of pirates and thieves.[38]

The ironborn shall be waves. Not the great and lordly, but the simple folk, tillers of the soil and fishers of the sea.[16]

I had forgotten what a small and noisy folk they are, my ironborn.[16]

The ironmen live their whole lives at sea.[21]