Irri is a Dothraki handmaid to Daenerys Targaryen. In the television adaptation Game of Thrones she is played by Amrita Acharia.[3]

Irri has skin the color of copper, with black hair and "almond-shaped eyes".[4] She, along with Jhiqui, are of an age with Daenerys Targaryen.[5] She is slimmer than Jhiqui.[6][7]

Irri was born to a khal of a khalasar. It was destroyed by Khal Drogo, and she was enslaved.[5] 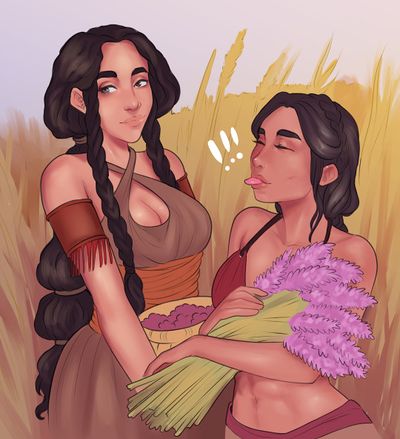 Irri and Jhiqui by Rae Lavergne©

After struggling through the red waste, Irri and Jhiqui attempt to convince Daenerys not to stay in Vaes Tolorro, believing it haunted by ghosts.[9]

Irri becomes a paramour to the lonely Daenerys. Daenerys feels guilt for this.[10] Irri is present when Daenerys purchases the Unsullied. Irri and Jhiqui free Rhaegal and Viserion to attack the Astapori slavers when Dany has the Unsullied attack their former masters.[11]

Irri and Jhiqui both develop a crush on Rakharo who has grown more tall and muscular. They argue over which of them he would prefer.[7]

Irri accompanies Daenerys to Daznak's Pit as part of the royal procession.[12] She and Jhiqui both depart Meereen as part of the search parties dispatched across the Skahazadhan to locate Daenerys after she disappears on Drogon's back.[13] 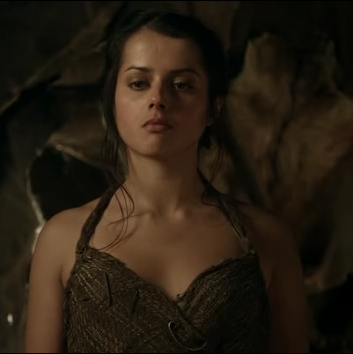 Amrita Acharia as Irri, in the HBO adaptation

Daenerys: What happened that night, when you woke... you're no bed slave, I freed you, remember? You...
Irri: I am handmaid to the Mother of Dragons. It is great honor to please my khaleesi.[10]