Jeor Mormont, also known as the Old Bear, is the 997th Lord Commander of the Night's Watch,[3] which he commands from their headquarters, Castle Black. Jeor, previously head of House Mormont and Lord of Bear Island, abdicated his seat in favor of his son, Ser Jorah Mormont, and joined the Night's Watch.[4] In the television adaptation Game of Thrones, Jeor is played by James Cosmo.[5]

Jeor remains an imposing figure in spite of his age, and most brothers hold him in great esteem.[6] He has broad-shoulders and a stern gaze.[6] He has lost most most of his hair save for his shaggy grey-white beard.[7] He is a considered strong, resolute leader, a formidable battle commander and is also fearless in the face of adversity.[8]

Jeor is always accompanied by his pet raven, which constantly demands corn.[7]

Despite his advanced age, Jeor still has his teeth. He believes this is due to his habits of putting lemon in his beer everyday.[9]

Presumably prior to Robert's Rebellion,[N 1] Jeor abdicated his seat, leaving the lordship of Bear Island to his son, Ser Jorah Mormont, and joined the Night's Watch. He rapidly rose through the ranks and was elected Lord Commander in 288 AC.[10] Jeor was deeply concerned by the declining power of the Watch and the rising threat of the wildlings beyond the Wall. On the advice of his First Ranger, Benjen Stark, he gave up the regular patrols used by his predecessor Lord Qorgyle in favor of a more random system, varying the number of patrols and the days of their departure, to make it more difficult for the wildlings to know their comings and goings. Sometimes a larger force was sent to garrison one of the abandoned castles for a fortnight or a moon's turn as well.[11]

When Jeor's son Jorah fled to the Free Cities to escape Lord Eddard Stark's punishment for selling captives into slavery, Jeor regained Longclaw, his house famous Valyrian steel blade, which his son left behind. Jeor's sister, Maege Mormont, became the head of House Mormont with the exile of Jorah. 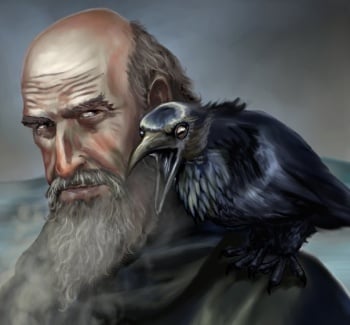 Lord Commander Mormont has Jon Snow named his steward to groom him for command. When he informs Jon of his father Eddard Stark's supposed treachery, he has him watched.[12]

Jeor dispatches the First Ranger, Benjen Stark, to search for missing rangers, including Ser Waymar Royce, and to determine the activities of Mance Rayder, the King-Beyond-the-Wall. After the discovery of two members of Benjen's party near the Wall, Lord Commander Mormont has their dead bodies brought back to Castle Black for further inspection. During the night, the corpses, which are actually reanimated wights, attack the Night's Watch, killing several men, including Ser Jaremy Rykker. Only the timely intervention of Jon and his direwolf, Ghost, prevent the wight Othor from killing Jeor.[13] For saving his life, Jeor gives the Bastard of Winterfell the Valyrian steel bastard sword Longclaw, ancestral weapon of House Mormont.[14] 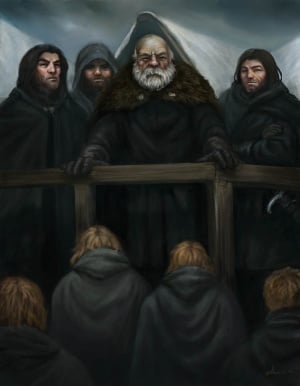 Jeor Mormont speaks to his brothers - by Brittmartin ©

After informing Jon his half-brother, Robb Stark, is now King in the North, Jeor has Jon watched again, just in case he heads south to join his brother.[7]

With missing rangers, the dead walking, reports of abandoned wildling villages, huge fires in the night, and Mance gathering free folk, Jeor decides to lead a great ranging beyond the Wall to discover what is going on and to search for the missing Benjen. He takes three hundred men from the Wall and marches north.[15]

At Craster's Keep, Jeor learns that Mance is gathering his people at the Frostfangs, preparing to launch an assault on the Wall. Jeor leads the expedition to the Fist of the First Men, a good defensive position located on Mance's only route to the Wall, and sends out three scouting parties.

While awaiting the return of the final scouting party, the Night's Watch is assaulted on the Fist by wights. The Night's Watch force is broken in the fight at the Fist and Jeor leads the survivors on a grim march back to Craster's Keep.

At Craster's Keep, after being told by Samwell Tarly of his slaying of the lone Other with an obsidian dagger given to Sam by Jon, Jeor discusses dragonglass daggers with Sam and the need to supply the Watch with dragonglass weaponry. However, shortly thereafter Jeor is slain by Ollo Lophand during the mutiny at Craster's Keep. As he lies dying he asks Sam to send word to Jorah Mormont, his dying wish being to forgive his son of his crimes and let him come home to take the black, relieving him of his exile.[16]

They say the king loved to hunt. The things we love destroy us every time, lad. Remember that.[13]

Jeor: ... Honor set you on the kingsroad... and honor brought you back.


Jon: My friends brought me back.

When dead men come hunting in the night, do you think it matters who sits the Iron Throne?[9]

Are you a brother of the Night's Watch ... or only a bastard boy who wants to play at war?[9]

Tarly, when I was a lad half your age, my lady mother told me that if I stood about with my mouth open, a weasel was like to mistake it for his lair and run down my throat. If you have something to say, say it. Otherwise, beware of weasels.[7]

We never knew! But we must have known once. The Night's Watch has forgotten its true purpose, Tarly. You don't build a wall seven hundred feet high to keep savages in skins from stealing women. The Wall was made to guard the realms of men … and not against other men, which is all the wildlings are when you come right down to it. Too many years, Tarly, too many hundreds and thousands of years. We lost sight of the true enemy. And now he's here, but we don't know how to fight him.[16]