Jeyne Poole is a member of House Poole and is the daughter of the steward of Winterfell, Vayon Poole.[5]

Jeyne is an attractive girl with brown eyes, dark hair, and pretty white teeth.[6][2] She is skinny and has a small bosom.[2]

Jeyne is the best friend of Sansa Stark.[7] She mocks Sansa's sister, Arya Stark, as Arya Horseface, smirking and neighing when the younger girl is near.[7] During a needlework session at Winterfell with Princess Myrcella Baratheon, Jeyne claims that Sansa Stark has caught the eye of Prince Joffrey Baratheon, which leads to a discussion that upsets Arya Stark.[7]

Jeyne accompanies her father, Vayon Poole, to King's Landing when Lord Eddard Stark is named Hand of the King.[9] During the Hand's tourney, Jeyne is frightened by Jalabhar Xho and giggles over Thoros of Myr. She declares that she will marry Lord Beric Dondarrion when she first sees the dashing lordling. After watching the young Ser Hugh die, a hysterical Jeyne is escorted away by Septa Mordane to regain her composure.[10]

Jeyne survives the massacre of Eddard's household following his arrest for treason, and she is confined by Ser Boros Blount of the Kingsguard in a room with Sansa Stark. The girls cradle each other in the same bed for comfort.[11] With Jeyne's father having died in the massacre, the whimpering girl is given over to Lord Petyr Baelish, who says he will find a place for her.[11]

A prisoner of Queen Cersei Lannister in the Red Keep, Sansa Stark misses her vanished friend, Jeyne.[12] During the Battle of the Blackwater, Jeyne is among the people in honor of whom Sansa sings.[13] When Ser Jaime Lannister says farewell to Steelshanks Walton in King's Landing, there is a northern girl present who claims to be Arya Stark, although Jaime does not recognize her. The girl, who is hollow eyed and skinny, wears a grey dress and a grey cloak with white satin trim.[1]

In case Brienne has the idea of rescuing the girl, Jaime tells Brienne that she is not Arya but some northern girl found by his father, Lord Tywin Lannister. They pin a wolf brooch on her and send her north to wed Lord Roose Bolton's legitimized bastard, Ramsay, in order to cement their claim to Winterfell. Brienne is shocked, but Jaime explains that with all of Arya's kin believed dead, besides her sister Sansa and half-brother Jon Snow on the Wall, no one will be able to dispute the girl's identity. According to Jaime, the Boltons are aware the girl is a fraud.[1]

Queen Cersei Lannister recalls that Lord Petyr Baelish dressed up a steward's whelp and claimed she was Arya Stark, sent to marry Ramsay.[14] Theon Greyjoy giving away "Arya" in marriage, by Thrumugnyr ©

As "Arya Stark", Jeyne accompanies the host of Lord Roose Bolton from the Twins to siege of Moat Cailin, where she meets her groom, Ramsay Bolton. Theon Greyjoy, a captive of Ramsay, recognizes Jeyne, as he grew up alongside her at Winterfell.[15]

The Boltons call upon the northern bannermen to assemble in Barrowton to pledge loyalty to the Iron Throne and attend the wedding of "Arya" to Ramsay.[16] After hearing that Stannis Baratheon has taken Deepwood Motte, Roose decides to move the wedding to Winterfell to strengthen Ramsay's claim and to goad Stannis into fighting.[17] Jeyne is protected by Barbrey Dustin, the Lady of Barrowton, during the journey from Barrowton to Winterfell.[2]

At Castle Black, Melisandre tells Jon Snow, the Lord Commander of the Night's Watch, she had a vision of a girl in grey atop a dying horse fleeing from a wedding, and they believe her to be Jon's half-sister, Arya,[16] Melisandre sends a disguised Mance Rayder with six spearwives to find and protect the girl.[18] Alys Karstark eventually arrives at the Wall having fled from her cousin, Cregan Karstark.[19]

Mance infiltrates Winterfell as a singer named "Abel", with the spearwives disguised as washerwomen.[20] Jeyne pleads with Theon that they should flee the castle together, but the tortured Theon insists that Jeyne continue impersonating Arya. Theon gives away "Arya" during the wedding in the godswood of Winterfell.[2] When Ramsay has Theon strip her for the bedding, numerous scars cover Jeyne's back, suggesting she had been whipped. When Ramsay asks her if she knows how to please a man, Jeyne replies fearfully that she has had training, implying that she had been kept in one of Petyr Baelish's brothels. Ramsay then forces Theon to prepare her sexually for him before he rapes her.[2] Theon considers cutting Jeyne's throat to end her misery or killing Ramsay, but he is too cowardly to do so.[2]

Jeyne spends all her time confined to a tower, and she is deeply traumatized by the things Ramsay does to her. The maids who bathe her notice bruises on her body, and the girl's sobbing is known throughout Winterfell. Theon sometimes brings her hot water for her baths.[21] According to Lady Dustin, the crying of "Arya Stark" is more a danger than the army of Stannis Baratheon. The Freys may not care, but the other northern houses who had served House Stark for generations do, and morale is being damaged from hearing the cries of Eddard Stark's "daughter". Theon thinks that Barbrey is suspicious of "Arya's" identity.[22]

Although Stannis's host is slowed by a blizzard during his march on Winterfell, the northern mountain clansmen are motivated to rescue "Ned's girl".[23]

Abel's washerwomen convince Theon to help them rescue "Arya",[24] but Theon keeps Jeyne's identity a secret from Abel.[21] When Roose orders the Freys and Manderlys to march from Winterfell after the death of Little Walder Frey, the spearwives begin their rescue effort to bring "Arya" to her brother, Jon Snow. As they are escaping, Jeyne's scream when one of the Bolton men is killed by Frenya alerts the other guards. Jeyne and Theon reach the top of the walls to realize that the rope has been left with one of the spearwives down below. Under attack by guards shooting arrows, Theon grabs Jeyne and jumps from the battlements.[21] Theon lands on top of Jeyne and breaks some of her ribs.[25]

Jeyne and Theon are discovered by Mors Umber, who has Tycho Nestoris of the Iron Bank bring the escapees to Stannis's camp in the crofters' village.[26] Jeyne suffers from frostbite on her nose.[26]

At Castle Black, Lord Commander Snow receives a letter in which Ramsay claims that Mance has been captured and his spearwives slain. Ramsay demands that his bride be returned to him. A number of free folk volunteer to march with Jon against the Bastard of Bolton, but the Lord Commander is soon after stabbed in the mutiny at Castle Black.[27]

Theon recalls that after he and Jeyne were rescued by Mors Umber outside Winterfell, Crowfood asked Jeyne questions about the castle to confirm her identity, such as the names of servants, including the cook and the smith. Having lived at Winterfell, Jeyne was able to answer these questions to Mors's satisfaction. Theon whispered to Jeyne on their trek to Stannis's camp that she must still pretend to be Arya, otherwise she will be nothing to them but a whore. It is feared that Jeyne will lose a bit of her nose to the frostbite.[25]

Stannis decides to send "Arya" to the Wall to reunite her with her brother, Jon Snow, tasking Ser Justin Massey with bringing Jeyne to Castle Black with an escort of six men and Alysane Mormont. Justin and Tycho are then to continue on to Braavos.[25] Jeyne and Theon Greyjoy escape Winterfell by leaping from the battlements.
Art by Juliana Pinho

Jeyne: I pray that I will make you a good wife and give you strong sons to follow after you.
Ramsay: That you will, and soon.[15]

I was never beautiful like Sansa, but they all said I was pretty.[2] 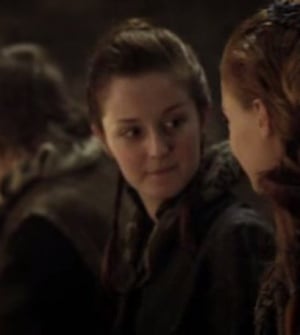 Jeyne with Sansa Stark in Game of Thrones

Of course, Jeyne had been in love with Lord Beric ever since she had first glimpsed him in the lists. Sansa thought she was being silly; Jeyne was only a steward's daughter, after all, and no matter how much she mooned after him, Lord Beric would never look at someone so far beneath him, even if she hadn't been half his age.[6]

Sansa: Where is Jeyne's father? Why can't Ser Boros take her to him instead of Lord Petyr having to do it? Where are you sending her? She hasn't done anything wrong, she's a good girl.
Cersei: She's upset you. We can't be having that. Not another word, now. Lord Baelish will see that Jeyne's well taken care of, I promise you.[11]

The girl's long brown hair blew wild in the wind. She had a pretty face, he thought, but her eyes were sad and wary.[1]

Jeyne, Jeyne, it rhymes with pain.[2]

Valiant Ned's precious little girl. Lady Arya's sobs do us more harm than all of Lord Stannis's swords and spears. If the Bastard means to remain Lord of Winterfell, he had best teach his wife to laugh.[22]

Robin: This march was madness. More dying every day, and for what? Some girl?
Morgan: Ned's girl.
Hugo: Ned's girl.[23]