From A Wiki of Ice and Fire
Jump to: navigation, search
See also Jon Umber (son of Jon) or Jon Umber (husband of Serena).

Jon Umber, known as Greatjon Umber[3] and the Greatjon,[4] is Lord of the Last Hearth and head of House Umber, a vassal family to the Starks of Winterfell.[1] His eldest son, also named Jon, is called the Smalljon. In the television adaptation Game of Thrones the Greatjon is played by Clive Mantle.[5]

Jon is a large man, nearly seven feet tall and twice as wide as Hodor. He is heavily muscled and is a formidable warrior with fists as large as hams.[6] Jaime Lannister regards him as one of the strongest living men in Westeros when thinking of who could match him in a fight.[7]

The Greatjon is proud, boisterous, and fierce,[3] and impressed only by those who earn his respect.[1] He does not often respect decorum[4] and he believes that women should not be on a battlefield.[8] Jon's speaking voice is a bass rumble,[9] but he surprisingly has a decent singing voice.[10] The Greatjon is a prodigious drinker[10] considered a sweaty oaf by some.[1]

Jon wields the biggest, ugliest greatsword that Bran Stark has ever seen, which makes it bigger than Ice.[1] He wears mail[4] and carries a warhorn.[11] 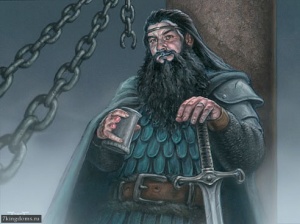 Jon leads his men when Robb Stark calls the bannermen of House Stark to Winterfell. At first he challenges the young lord's authority, threatening to take his forces home if he is placed behind Lords Halys Hornwood or Medger Cerwyn in the order of march. After being called out by Robb, the Greatjon draws his sword, only to have the direwolf Grey Wind bite off two of his fingers. Impressed with Robb's courage, the Greatjon makes a joke of it instead of becoming angry and becomes Robb's greatest champion.[1] Jon shoves Osha out of the way when the wildling servant talks to Robb.[1]

The Umbers reside at the Children's Tower when Robb's host camps at Moat Cailin.[9][12] Jon suggests that Robb take the fight to Lord Tywin Lannister. Robb decides to split his host in two, with his horse marching southwest to relieve Riverrun and his foot marching south to confront Tywin. Robb considers giving command of the infantry to Jon, but he instead chooses Lord Roose Bolton to lead them after Catelyn Stark suggests using a more cautious man than the Greatjon.[9]

When the northern host splits at the Twins, Greatjon goes south with Robb's force along with his son, the Smalljon, who is one of Robb Stark's personal guard. The Umber lances participate in the battle in the Whispering Wood, and a captured Ser Jaime Lannister is dragged by the Greatjon and Theon Greyjoy.[11]

While Ser Brynden Blackfish attacks Jaime's host at Riverrun from the north during the Battle of the Camps, Umbers are among the armored horse who attack from the west. The Greatjon sets fire to the siege towers being built by outside the castle.[13]

After Riverrun is relieved and news of Lord Eddard Stark's death arrives, the Greatjon prays in the castle's godswood with other followers of the old gods. The Greatjon and Theon sit closest to Robb during their war council in Riverrun's Great Hall. He calls Ser Stevron Frey a craven for suggesting caution, and he is dismissive of Catelyn's call for peace. The Greatjon is the first of the assembled nobles to declare Robb the King in the North.[3]

Lord Jon is present when Robb Stark explains his terms for peace with the Iron Throne in the Great Hall of Riverrun. He barks at Ser Cleos Frey when the envoy does not initially acknowledge Robb as a king. Jon believes that the red comet is a symbol of northern vengeance for the execution of Robb's father, Lord Eddard Stark,[6] and he believes that direwolves were sent to the Stark children by the old gods.[14] Robb convinces Catelyn to treat with Renly Baratheon by threatening to send the bombastic Greatjon instead.[15]

Jon's uncles, Mors Crowfood and Hother Whoresbane, remained at the Last Hearth as the castle's castellans. During the harvest feast, Hother complains that the Greatjon took too many soldiers south and the Last Hearth lacks men to gather the harvest.[16]

After participating in the Battle of Oxcross with Robb, the Greatjon goes on to capture the gold mines at Castamere, Nunn's Deep, and the Pendric Hills.[17] 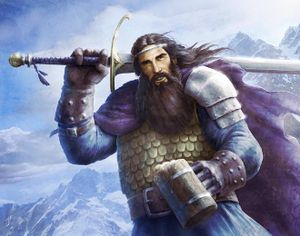 While at the Crag, the Greatjon informs Robb of the supposed deaths of his brothers, Bran and Rickon. Robb then sleeps with Jeyne Westerling.[4] When Robb breaks his marriage contract with the Freys by wedding Jeyne, the Freys in his host angrily depart the Crag. The Greatjon urges Robb to attack them, but the king declines. The Greatjon offers to make marriage contracts for his uncles, Mors and Hother, in Robb's place.[4]

The Greatjon returns to Riverrun with Robb after the Battle of the Blackwater. While a vengeful Lord Rickard Karstark is outraged that Catelyn released Jaime from imprisonment at Riverrun, the Greatjon is more understanding and attributes Catelyn's actions to a mother's folly.[4] The Greatjon threatens to kill Rickard with a spear after the Lord of Karhold murders Tion Frey and Willem Lannister, prisoners of Robb. The king orders Jon to hang Rickard's accomplices, and Robb beheads Lord Karstark personally.[18]

The Greatjon leads the van on the march to the Twins for the wedding of Lord Edmure Tully and Roslin Frey. In Robb's plan to retake Moat Cailin from the ironborn, the Greatjon is given command of the van and told to make his diversionary attack convincing, as Robb's own force is to circle behind Moat Cailin with the guidance of the crannogmen.[8]

During the wedding feast at the Twins, the Greatjon drunkenly sings "The Bear and the Maiden Fair" while musicians perform "Flowers of Spring", and he then sings "The Lusty Lad" when the musician play "Iron Lances". Jon carries a crying Roslin over his shoulder and takes her from the hall as part of the bedding customs.[10]

In preparation for the Freys' betrayal of House Stark, Petyr, Merrett, and Ser Whalen Frey were tasked with getting the Greatjon too drunk to fight. Despite consuming enough wine to kill three normal men, when the Red Wedding begins eight men are needed to subdue the Greatjon in chains. He takes the sword of the first man to attack him, kills one, wounds two others, and bites off half the ear of Ser Leslyn Haigh.[20] The Greatjon's son and heir, the Smalljon, is slain during the massacre.[10]

The Greatjon is held captive at the Twins.[21] Following the siege of Riverrun, Jaime informs Ser Edwyn Frey and Walder Rivers that King Tommen I Baratheon requires the transfer of all captives taken by House Frey in the Red Wedding.[22]

Lord Umber continues to be a prisoner at the Twins.[23] Half of House Umber under Hother Whoresbane swears fealty to Roose Bolton, the new Warden of the North, though Jon Snow and Barbrey Dustin think this is only because the Greatjon is still held captive.[24][25] The other half of the Umbers, under Mors Crowfood, take up the cause of Stannis Baratheon.[24][26]

Robb: My lord father taught me that it was death to bare steel against your liege lord, but doubtless you only meant to cut my meat.
Jon: Your meat is bloody tough.[1]

We'll shove our swords up Tywin Lannister's bunghole soon enough, begging your pardons, and then it's on to the Red Keep to free Ned.[9]

MY LORDS! Here is what I say to these two kings! Renly Baratheon is nothing to me, nor Stannis neither. Why should they rule over me and mine, from some flowery seat in Highgarden or Dorne? What do they know of the Wall or the wolfswood or the barrows of the First Men? Even their gods are wrong. The Others take the Lannisters too, I've had a bellyful of them. Why shouldn't we rule ourselves again? It was the dragons we married, and the dragons are all dead! There sits the only king I mean to bow my knee to, m'lords. The King in the North![3]

Leave off, Karstark, it was a mother's folly. Women are made that way.[4]

Your creepers best come fast, or my men will swarm those walls and win the Moat before you show your face. I'll make a gift of it to you when you come dawdling up.[8]

I thought he was going to kill me. Did you see the way he threw down Hal, like he was no bigger than Rickon? Gods, I was so scared.[1]

Catelyn: Your father once told me that the Greatjon was as fearless as any man he had ever known.
Robb: Grey Wind ate two of his fingers, and he laughed about it.[9]

The Greatjon's the Young Wolf's strong right hand, all know that to be true.[16]

Amongst the living, Greatjon Umber was stronger, Strongboar of Crakehall most likely, both Cleganes for a certainty. The Mountain's strength was like nothing human. It did not matter. With speed and skill, Jaime could beat them all.[7]

Catelyn would sooner Lord Umber had seen fit to stay sober, but telling the Greatjon not to drink was like telling him not to breathe for a few hours.[10]

You shall have one task and one task only, Merrett, but I believe you are well suited to it. I want you to see to it that Greatjon Umber is so bloody drunk that he can hardly stand, let alone fight.[20]

Jon is mentioned as having "sons and brothers" with him when he answers Robb's calling of the banners.[1][27] He also has daughters.[24] His eldest son and heir, Smalljon Umber, is killed during the Red Wedding.[28]

Greatjon Umber on the Game of Thrones wiki.