Jonos Bracken is the Lord of Stone Hedge and head of House Bracken. In the television adaptation Game of Thrones, he is portrayed by Gerry O'Brien.

Jonos is heavier than Jaime Lannister, but not as tall. He has thick shoulders and arms, and coarse brown hair and brown eyes. Jonos wears a brown woolen tunic embroidered with the red stallion of House Bracken. When ready for combat, he wears plate and mail and a grey steel greathelm with a horsehair crest.[2]

Jonos has five daughters, and a bastard son, Harry Rivers. However, his rival, Lord Tytos Blackwood, does not believe that Harry was fathered by Jonos.[2] 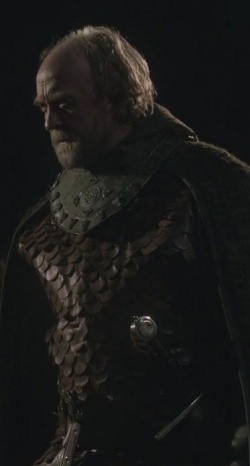 Before arresting Tyrion Lannister at the crossroads inn, Lady Catelyn Stark has Bracken men-at-arms affirm that Jonos is loyal to her father, Hoster Tully, the Lord Paramount of the Trident.[4] 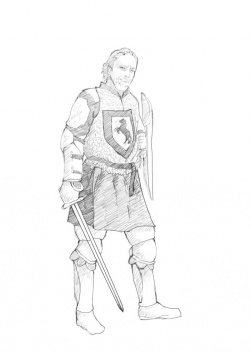 Ser Jaime Lannister arrives to end the siege of Raventree, finding Jonos abed with a common woman named Hildy. When Jaime inquires about Lady Bracken, Jones responds that she spends all her time praying after Stone Hedge was burned.[2]