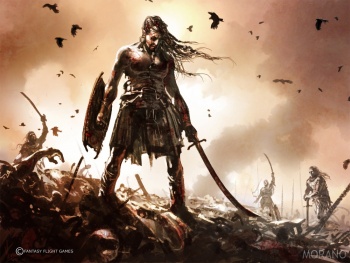 Khal is a title that the Dothraki use to designate the leader of a khalasar, the nomadic groupings upon which their society is based.

The khal leads the khalasar and its various khas. The khal is usually considered the strongest or fiercest of a khalasar; he must be a ruthless and cunning warrior to deal with any who challenge his authority or get in his way. It is said that if a khal cannot ride, he cannot lead.

Khals keep trusted companions and guards known as bloodriders, who follow the khal everywhere, even in death. If their khal falls in battle, the bloodriders live only long enough to avenge his death. They refer to each other as “Blood of my Blood” as a sign of respect and the closeness of their bond.

A khal's wife is called a khaleesi, while his heir to a khalasar is named the khalakka.[1] When a khal dies, his khaleesi joins the dosh khaleen in Vaes Dothrak. Even the mightiest khals bow down before the authority and wisdom of the dosh khaleen.[1]