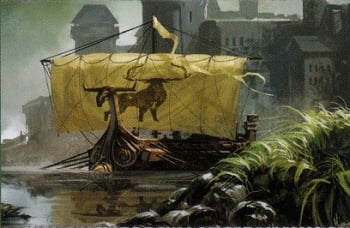 King Robert's Hammer is a war galley of four hundred oars in service at King's Landing. It is called Rob's Hammer by its oarsmen.[1] It is the largest ship in service with the royal fleet of the Iron Throne.[2] It is named after King Robert I Baratheon.[1]

King Robert's Hammer is part of the escort Tyrion Lannister sends to bring Myrcella Baratheon to Braavos. If the small fleet spots any lone ship they are to run it off or destroy it. Should an enemy fleet give battle the Bold Wind is to escort the Seaswift while the rest of the fleet, consisting of Rob's Hammer, Lionstar and Lady Lyanna, are to give battle.[1]

During the Battle of the Blackwater, Ser Davos Seaworth notices the absence of Rob's Hammer from the ships defending King's Landing against Stannis Baratheon.[2]

After the Blackwater there are less than a dozen warships left in King's Landing, so Queen Regent Cersei Lannister orders the construction of ten new dromonds.[3] Sweet Cersei will be the equal of Rob's Hammer, while Lord Tywin will have twice as many oars.[4][5]

Harys: King Robert's Hammer is the mightiest warship in all Westeros.
Aurane: She was. Sweet Cersei will be her equal, once complete, and Lord Tywin will be twice the size of either.[5]