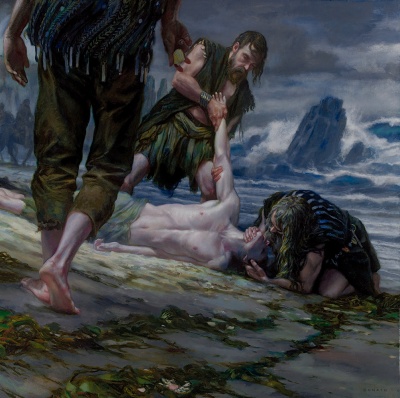 Aeron Greyjoy reviving a drowned man, art by Donato Giancola ©
"Kiss of life" is also another name for the last kiss used by red priests.

The kiss of life is the method of resuscitation used by the priests of the Drowned God. It is a form of cardiopulmonary resuscitation.[1]

Followers of the Drowned God are ritually drowned and then revived by priests. Many ironborn are symbolically drowned as infants by being briefly dipped into a tub of seawater.[1] Older traditions have devotees literally drowned, however.[2] Priests and their acolytes, the drowned men, then work the arms, pump the chest, and repeatedly breathe the kiss of life until the devotee revives.[1] Priests are occasionally unable to revive the drowned man, with the exception of Aeron Greyjoy, who has never lost a man.[1]

Some priests claim to have been revived multiple times, such as Lodos the Twice-Drowned[3] and Tarle the Thrice-Drowned.[4]

Adversaries of the ironborn can be drowned as sacrifices to the Drowned God without being revived.[5][6]

Priests of the Drowned God spoke out against Horgan Hoare, King of the Iron Islands, after Horgan allowed a sept to be built on Old Wyk. Worshipers of the Drowned God destroyed the sept and dragged followers of the Faith of the Seven into the water to be drowned, so they could regain their faith. In response, Horgan Priestkiller began slaughtering priests.[7]

Aeron Greyjoy revives Emmond after the youth has been drowned by the Damphair's drowned men.[1]

The priests of the Drowned God know how to drown a man and bring him back, and I have made a study of their beliefs and customs.[8]

—Cerrick to Duncan the Tall

Have courage. We came from the sea, and to the sea we must return. Open your mouth and drink deep of god's blessing. Fill your lungs with water, that you may die and be reborn. It does no good to fight.[1]

Aeron: Rise. You have drowned and been returned to us. What is dead can never die.


Aeron: You belong to the god now.[1]
—Aeron Greyjoy and Emmond