From A Wiki of Ice and Fire
Jump to: navigation, search
For the Bracken man-at-arms, see Lharys. For the cousin of Princess Rhaena Targaryen, see Larissa Velaryon.

Larys Strong, known as Larys Clubfoot or the Clubfoot, was the Lord of Harrenhal and head of House Strong during the latter part of the reign of Viserys I Targaryen and the reign of Aegon II Targaryen. He served on the small council as the master of whisperers and Lord Confessor for both kings.[1]

In the television adaptation House of the Dragon, Larys is portrayed by Matthew Needham.[4]

One of Larys's feet was twisted at birth, so he dragged it with a limp.[3]

Larys rarely spoke, preferring to listen. When he did so it was either to be glib or share words of great importance.[5] The Clubfoot was an enigmatic and cunning man.[2] Although he could be convincing and amiable when needed,[6] he kept his own counsel and was largely friendless.[3]

Historians are still baffled as to exactly what Clubfroot's loyalties and goals were during the Dance of the Dragons. He does not seem to have been absolutely loyal to Aegon II, so much as he aligned with him against their mutual enemy Rhaenyra, who had shamed House Strong in her affair with his older brother.[6]

Reign of Viserys I

In 105 AC, Larys was brought to court by his father, Lord Lyonel Strong, alongside his older brother, Ser Harwin, and two sisters. Larys joined the confessors of King Viserys I Targaryen.[1][7]

In 120 AC, Lyonel and Harwin died in a fire at Harrenhal, leaving Larys to inherit his father's seat and title as Lord of Harrenhal. Although the cause of the fire was never determined, one of the suggestions to have been put forth was that Larys had caused the fire.[1][7][8] Other suggested culprits were Prince Daemon Targaryen, Lord Corlys Velaryon, King Viserys I himself, and the curse of Black Harren.[1][7]

When King Viserys I died in 129 AC, Larys was part of the green faction at court. He attended the meeting of the small council which agreed to support Aegon II Targaryen against his older half-sister, Rhaenyra Targaryen. Larys cut his palm and had the male conspirators in attendance swear a blood oath.[5]

When the Dance of the Dragons broke out, Larys' castle was taken by Prince Daemon Targaryen in the assault on Harrenhal. Aegon's mother, Queen Alicent Hightower, allegedly ordered Larys to torture Blood after the murder of Prince Jaehaerys Targaryen.[9] The Clubfoot drew up lists of blacks whom Ser Criston Cole could march against.[10]

Larys escaped capture during the fall of King's Landing to Rhaenyra in 130 AC.[10] He spirited Aegon, who was still recovering from the battle at Rook's Rest, and the king's two remaining children, Prince Maelor and Princess Jaehaera, from the Red Keep through a secret passage which led them out of the capital while bypassing the city's gates. Larys insisted the group part ways and ordered Ser Rickard Thorne of Aegon's Kingsguard to bring Maelor to Lord Lyonel Hightower at Oldtown, and Ser Willis Fell of the Kingsguard to escort Jaehaera to Lord Borros Baratheon at Storm's End. Larys disguised King Aegon as a commoner and sent him to Dragonstone under the care of Ser Marston Waters, believing her own stronghold would be the last place Rhaenyra would think to search for her half brother.[11][12]

On campaign in the riverlands, Prince Aemond Targaryen believed Larys had somehow aided Rhaenyra in the capital's fall. Aegon's brother had every member of House Strong at Harrenhal killed.[2]

Larys remained in King's Landing, strategically working in secret to undermine Rhaenyra's hold on the capital. When Queen Helaena Targaryen committed suicide, a rumor was spread throughout the city that she was murdered on the orders of Rhaneyra. Mushroom in his writings accused Larys of being the source for this slander.[11]

The massive riot of King's Landing led to Rhaenyra abandoning the capital. When Ser Perkin the Flea and his followers gained control of the Red Keep and crowned Trystane Truefyre during the Moon of the Three Kings, Larys emerged and walked into the Red Keep, where he was greeted by Perkin and given a place of honor at the side of Trystane.[11]

Larys feigned support to the pretender Trystane and secured the release of Alicent, Grand Maester Orwyle, and Lord Corlys Velaryon. When the host of Lord Borros Baratheon arrived outside King's Landing, Larys offered to treat with the Lord of Storm's End on Trystane's behalf. Larys instead conspired with Perkin and the greens to betray Trystane and give the city to supporters of Aegon II. A full pardon was promised to Perkin and all his followers in exchange for their aid in restoring the capital to King Aegon, who had killed Rhaenyra after the fall of Dragonstone. However, the pardon was not extended to Trystane, who was later executed. Larys agreed to a betrothal with one of Borros's daughters, Floris Baratheon. When Alicent advocated that Corlys should be killed for having supported Rhaenrya, Larys pointed out that her son, Aegon, was on Dragonstone surrounded by a Velaryon fleet. The Clubfoot suggested to Alicent they pardon Corlys and wait until the war's end before quietly disposing of him.[6]

During a meeting of the council after Aegon's return, Corlys Velaryon was outraged by the suggestion of Ser Tyland Lannister to execute Prince Aegon the Younger, Rhaenyra's surviving son who was held captive by the greens. Lord Strong convinced Aegon II not to punish Corlys, as that would make Alyn Velaryon an enemy. After the meeting, Larys discreetly alerted Corlys of the plot to eventually murder him, and the Clubfoot persuaded the Sea Snake to be part of a scheme of his own devising.[6]

After the defeat of Lord Borros and his army at the Battle of the Kingsroad, King Aegon declined Lord Velaryon's recommendation to surrender. Larys had Princess Baela Targaryen clandestinely spirited away so she could not be used as a hostage against Corlys. Aegon II was soon found dead with blood on his lips, murdered by poison. Larys and Corlys had the few loyalists remaining either killed or imprisoned and persuaded the remaining greens to surrender as the Lads descended on the capital.[6]

Aegon II was succeeded as king by Aegon the Younger, who wed Princess Jaehaera.[6] When the riverlords reached King's Landing, they were joyously greeted by smallfolk, a welcome presumably devised by the Clubfoot.[3]

Hour of the Wolf 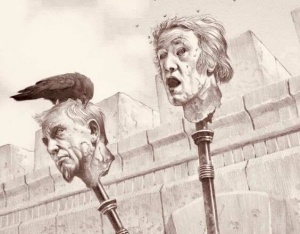 Fortunes turned against Lord Strong and his conspirators with the arrival of the northern army of Lord Cregan Stark, who served as Hand of the King to the new King Aegon III Targaryen during the Hour of the Wolf. Despite having been a supporter of Rhaenys, Cregan objected to the murder of Aegon II. Grand Maester Orwyle confessed to having given Larys the poison used to kill Aegon, and Ser Perkin confessed to being the Clubfoot's agent. While Lord Corlys admitted to having conspired against Aegon for the good of the Seven Kingdoms, Larys refused to confirm or deny Cregan's accusations. Lord Stark condemned both of the great lords, but Alysanne Blackwood convinced him to spare Lord Velaryon.[3]

While most of those found guilty followed Perkin in taking the black, Lord Larys and Ser Gyles of the Kingsguard chose death over the Wall. Cregan beheaded the pair with his Valyrian steel greatsword, Ice. Cregan granted Larys' last request, that his clubfoot be removed from his corpse so Larys would at least be free of it in death.[3]

The heads of Larys and Gyles were mounted on pikes by the gates of the Red Keep. Lord Strong's corpse was given to the silent sisters, and years later his bones were taken to Harrenhal as his final resting place. Cregan ordered that the removed foot be buried in a field, but the limb disappeared before that could occur.[3] As Larys was the last of his line, his death brought an end to House Strong.[13]

When was a wolf ever moved by words?[3]

When I am dead, hack off my clubfoot with that great sword of yours. I have dragged it with me all through life, let me be free of it in death at least.[3]

A man who gathers whispers can spread them just as well.[2]

Was there ever a man as devious as the Clubfoot? Oh, he would have made a splendid fool, that one. The words dripped from his lips like honey from a comb, and never did poison taste so sweet.[6]

The enigma that is Larys Strong the Clubfoot has vexed students of history for generations, and is not one we can hope to unravel here. Where did his true loyalty lie? What was he about?[6]