Lysono Maar is a sellsword from Lys in service to the Golden Company. He is the company's spymaster.[1]

Lysono is a Lyseni, with pale lilac eyes and long white-gold hair.[1][2] His lips are full, giving him an almost feminine appearance at first glance. His fingernails are painted purple, and his earlobes drip with pearls and amethysts.[1]

Lysono is glib but guarded in conversation.[2] He speaks the Common Tongue of the Seven Kingdoms very well.[2] 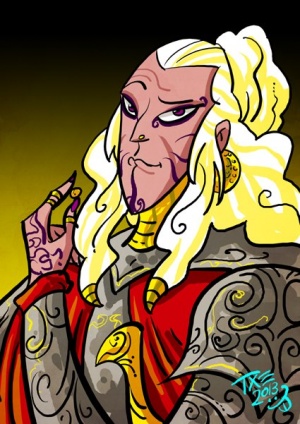 When the Golden Company arrives in Volantis, a disguised Lysono tries to arrange passage from the harbor to Daenerys Targaryen in Meereen. No trade ships are en route to the city, however, because of the Yunkish blockade during the second siege of Meereen.[1]

Lysono swears his allegiance to Aegon Targaryen and is supportive of the plan to invade Westeros without the assistance of Daenerys and her dragons.[1]

During the landing of the Golden Company, the cautious Harry Strickland suggests using Lysono's spies to gather information.[3]

Near Griffin's Roost, Princess Arianne Martell and her party encounter Lysono with a column of sellswords from the Golden Company. His appearance reminds her of House Targaryen; while Lysono thinks that a compliment, Arianne is unnerved.[2]


Lysono: Oh, even prettier. Though if truth be told, I have only seen the one.[2]
—Arianne Martell and Lysono

The spymaster was new to Griff, a Lyseni named Lysono Maar, with lilac eyes and white-gold hair and lips that would have been the envy of a whore. At first glance, Griff had almost taken him for a woman.[1]

Arianne's company was met by a column of sellswords down from Griffin's Roost, led by the most exotic creature that the princess had ever laid her eyes on, with painted fingernails and gemstones sparkling in his ears.[2]

Was this what Viserys looked like? If so perhaps it is a good thing he is dead.[2]