Maege Mormont, known as the She-Bear, is the head of House Mormont and the Lady of Bear Island. She inherited her title from her nephew, Ser Jorah Mormont, after he fled into exile. She is the younger sister of the Lord Commander of the Night's Watch, Jeor Mormont.[2]

Maege is a short, stout, grey-haired woman, and a fierce warrior. She dresses in patched ringmail, and her favored weapon is a spiked mace.[3][4] She is dedicated to the old gods, and loyal to House Stark. According to her brother, Jeor, she is stubborn, short-tempered, and willful.[5]

Maege inherited the title of head of House Mormont and ruler of Bear Island after her brother's only heir, Jorah Mormont, fled to the Free Cities to escape justice for unlawfully selling poachers into slavery to pay for his debts. She worked hard to regain the family's noble name, and to help the estate recover from the state of near-poverty Jorah left behind.[6]

Maege has five daughters: her eldest and heir, Dacey; and Alysane, Lyra, Jorelle, and Lyanna. She has no sons.

No one knows who the father of Maege's children is, or even if she ever married.[7] There are rumors that she beds with a bear;[8][9] her daughter, Alysane, smilingly shares the same rumor, claiming that Mormont women are skinchangers who turn into bears and find mates in the woods.[10] Maege prefers to keep her own counsel.[7] Nonetheless, all of Maege's daughters carry the surname "Mormont", and none appear to be considered bastards. It is possible that Maege's husband came from a family of lower nobility than the Mormonts, or no nobility at all, in which case a woman can prefer to retain her own surname for herself and for her children.[7] 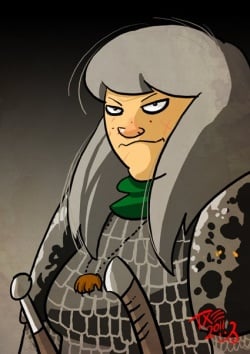 Lady Maege and her heir, Dacey, lead their forces to Winterfell when Robb Stark calls his banners to ride south against the Lannisters.[3] When the northern host splits at the Twins, Maege continues south in Robb's host. Her forces signal the springing of the trap at the Battle of the Whispering Wood.[11] After Lords Greatjon Umber and Rickard Karstark proclaim Robb to be King in the North at Riverrun, Maege hails Robb as "King of Winter".[12]

After the Battle of Oxcross, Lady Mormont captures thousands of cattle in the Westerlands and drives them towards the Riverlands. It is not stated whether or not she manages to succeed in this task, as the passage back to the Riverlands is still held by the Lannisters.[13]

Lady Maege is among the northern lords who accompanies King Robb Stark north from Riverrun to attend the wedding of Edmure Tully at the Twins. At Hag's Mire, however, she and Galbart Glover are ordered by Robb to travel to Seagard. There they are to take separate ships from Lord Jason Mallister to sail up the Neck and to search for Greywater Watch as envoys to the crannogmen, in preparation for Robb's planned attack on ironborn-occupied Moat Cailin. The letters they carry will contain false commands for northern lords, however, in case they are captured by enemies.[14] Maege's heir, Dacey, is one of those killed at the Twins during the Red Wedding.[15]

Alysane Mormont mentions her mother, Maege, when Asha Greyjoy asks about her siblings. Maege is with two of her other daughters, Lyra and Jory, though it is not said where, while her youngest, Lyanna is back on Bear Island.[10]

You are not the only one touched by this war. Like as not, my sister is marching in your brother’s host, her and those daughters of hers, dressed in men’s mail. Maege is a hoary old snark, stubborn, short-tempered, and willful. Truth be told, I can hardly stand to be around the wretched woman, but that does not mean my love for her is any less than the love you bear your half sisters.[5]