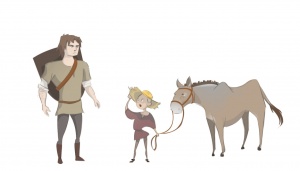 Maester is a mule owned by Ser Duncan the Tall, a gift from one of Egg's brothers[N 1] at a time when he and Egg owned no other horse than Thunder, having sold Sweetfoot early on[1] and lost Chestnut due to his death in the desert of Dorne on the way to Vaith.[2]

Maester was usually ridden by Egg,[2] until Ser Duncan received Rain, a young palfrey, from Rohanne Webber.[2] The mule is mainly used as a pack animal to carry Ser Duncan's supplies.[2][3]