From A Wiki of Ice and Fire
(Redirected from Maggy)
Jump to: navigation, search 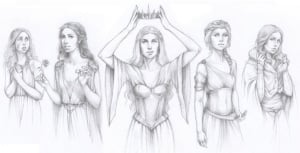 Maggy the Frog was a fortune teller from Lannisport who dealt in cures and love potions. Her true name has been forgotten, while "Maggy" was likely a bastardization of the word "maegi".[1] In the television adaptation Game of Thrones she is portrayed by Jodhi May.

Maggy was squat and warty, with crusty yellow eyes, no teeth, and pale green jowls.[1] She spoke in a croaking,[2] accented voice.[3] She had a bent-back.[3]

Westerosi could not pronounce her real name,[4] which was long and foreign sounding.[1] Some considered her a priestess[4] or a half-mad witch woman.[5]

Maggy conducted business in a dark green tent with a tall peaked roof.[1]

Maggy came to Lannisport as a younger woman,[1] brought by her husband who had been trading saffron and pepper in Essos.[4] Lord Tytos Lannister ennobled their merchant son, the founder of House Spicer, as a petty lord.[1] Maggy was the grandmother of Ser Rolph, Ser Samwell, and Sybell. Many people of Lannisport visited Maggy for her cures and love potions.[4]

When she was ten,[6] Cersei Lannister became enamored with Prince Rhaegar Targaryen during the tournament in honor of Viserys's birth.[7] Cersei and two friends, Jeyne Farman and Melara Hetherspoon, sought out Maggy to learn their futures and which men they would marry, but Jeyne fled at the sight of Maggy's yellow eyes. Maggy initially refused to tell the futures of the remaining girls, but grudgingly agreed faced with Cersei's threats. Using a twisted iron dagger, Maggy drew and drank blood from the girls' thumbs.[1]

Maggy allowed Cersei three questions and made the prophecy of the valonqar (High Valyrian for "little brother"), which haunted Cersei thereafter. When Melara took her turn, Maggy predicted that she would die young, and hinted that it would be by Cersei's hand. Dissatisfied, Cersei threw a jar of potion into Maggy's eyes and fled, leaving Maggy to curse them both. Melara, who begged Cersei never to speak of the prophecies, soon drowned in a well.[1] Cersei never told of Maggy to her father, Lord Tywin Lannister, who would have cut out Maggy's tongue, or her twin, Jaime.[2] Cersei has since often dreamed of Maggy and her prophecies.[1]

Queen Regent Cersei Lannister is reminded of Maggy whenever she sees Olenna Tyrell in the Red Keep.[3]

Cersei again dreams of her visit to Maggy's tent, although she recognizes that some details may have changed.[8] She mentions the dream and Maggy's prophecies to Qyburn[1] and to Taena of Myr.[6]

At some point during her walk of penance, Queen Regent Cersei Lannister imagines Maggy standing in the crowd. Recalling Maggy's prophecy causes Cersei to begin crying.[9]

Cersei: When will I wed the prince?


Maggy: Never. You will wed the king.
Cersei: I will be queen, though?


Maggy: Aye. Queen you shall be... until there comes another, younger and more beautiful, to cast you down and take all that you hold dear.[1]
—Maggy in the dream of Cersei Lannister

Cersei: Will the king and I have children?
Maggy: Oh, aye. Six-and-ten for him, and three for you. Gold shall be their crowns and gold their shrouds, she said. And when your tears have drowned you, the valonqar shall wrap his hands about your pale white throat and choke the life from you.[1]

—Maggy in the dream of Cersei Lannister

Melara: Will I marry Jaime?
Maggy: Not Jaime, nor any other man, Worms will have your maidenhead. Your death is here tonight, little one. Can you smell her breath? She is very close.[1]

—Maggy and Melara Hetherspoon in the dream of Cersei Lannister

In Lannisport it was said that she had been young and beautiful when her husband had brought her back from the east with a load of spices, but age and evil had left their marks on her.[1]

Piss on your prophecy, old woman.[6]