The master of whisperers or mistress of whisperers is the spymaster for the Lord of the Seven Kingdoms, the monarch on the Iron Throne. He or she is charged with gathering intelligence from informants in the Red Keep, in King's Landing, around the Seven Kingdoms, across the narrow sea, and other places. Unlike the other positions of the small council, this title was not created by Aegon I Targaryen. 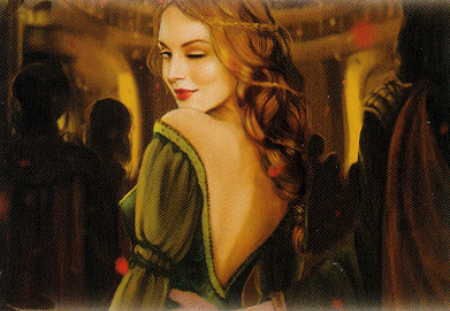 Spy in Their Midst by Katherine Dinger © Fantasy Flight Games

Tyanna of the Tower, the most feared of King Maegor I Targaryen's wives, served her husband as his mistress of whisperers.[1] It was said that speaking secrets in the Red Keep was foolish, as rats and other vermin were her spies. She tortured many enemies of the Crown, including fellow wife Alys Harroway and her many alleged lovers; all but two confessed to adultery.[2]

Larys Strong, Lord of Harrenhal, served as master of whisperers towards the end of the reign of King Viserys I Targaryen. He continued to serve in the office under King Aegon II Targaryen during the Dance of the Dragons. At the same time, Lady Mysaria, nicknamed Lady Misery, served as mistress of whisperers for Queen Rhaenyra Targaryen.[3][4]

Brynden Rivers, known as Lord Bloodraven, was a spymaster[5] with a network of spies while serving on Daeron II Targaryen's small council.[6] Brynden later served King Aerys I Targaryen as master of whisperers as well as Hand of the King.[7]

Lord Varys, nicknamed the Spider, was the master of whisperers for King Aerys II Targaryen, and after the Mad King's death, for King Robert I Baratheon.[8] He uses "little birds" as part of his network of informants.[9]

Lord Varys serves as the master of whisperers for King Robert I Baratheon[8] and his successor, Joffrey I Baratheon.[10]

Since Varys disappeared from King's Landing the night of Lord Tywin Lannister's murder, Queen Regent Cersei Lannister appoints Qyburn, a former maester, as the new master of whisperers for King Tommen I Baratheon.[11]

After Cersei is arrested by the Faith of the Seven and Ser Kevan Lannister assumes the regency, Qyburn is dismissed from the small council but continues to handle Varys's whisperers.[12]

Following Cersei's walk of atonement, Qyburn remains separate from the council but keeps reporting to Kevan.[13]

Known masters and mistresses of whisperers

Catelyn: How could you know all that?
Varys: The whisperings of little birds. I know things, sweet lady. That is the nature of my service.[14]

The King's Justice must be fearsome, the master of coin must be frugal, the Lord Commander of the Kingsguard must be valiant ... and the master of whisperers must be sly and obsequious and without scruple. A courageous informer would be as useless as a cowardly knight.[10]