Men of the Frozen Shore 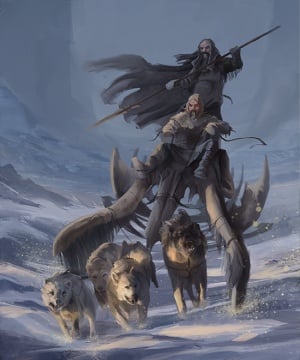 Walruses are central to at least one faction of Frozen Shore men.
Art by Paolo Puggioni

A woman from the Frozen Shore
Art by Paolo Puggioni

The Frozen Shore men have queer names, as they name themselves after beasts of the region. They employ chariots made of walrus bone, pulled by dogs as large as direwolves, as transport. They also breed reindeer. Their women clad themselves in sealskins.

There are at least two factions of them, one wearing antlers on their hats and others wearing walrus tusks. The two sorts do not get along with each other. The Great Walrus is one of the free folk leaders from the Frozen Shore.[1]

Huts of ice are used by some inhabitants of the Frozen Shore. While most free folk worship the old gods, some coastal tribes worship gods of snow and ice.[2]

Bear Island has historically been raided by wildlings from the Frozen Shore.[3]

Before Mance Rayder negotiated a peace, the men of the Frozen Shore, particularly the walrus men, warred with the cannibal ice-river clans.[4]

Clan members are among Mance Rayder's army as it marches on and later attacks the Wall.[4][5]

The men of the Frozen Shore are among the free folk who accompany Tormund to the Wall in declaring a truce with the Night's Watch.[1]

A savage folk. The men are bad, the women worse.[1]