Ser Myles Toyne, also known as Blackheart, was an exiled knight from House Toyne and a captain-general of the Golden Company.[1]

Myles was not dark and handsome like his infamous forebear, Ser Terrence Toyne. Instead, Myles was jug-eared, with a big nose and a crooked jaw.[1]

Myles was known as Blackheart because of the sigil of House Toyne, which was depicted on his shield. He enjoyed the nickname and appreciated having a fearsome reputation, but he was not a cruel man. His good friend Jon Connington considered Myles full of life.[1] 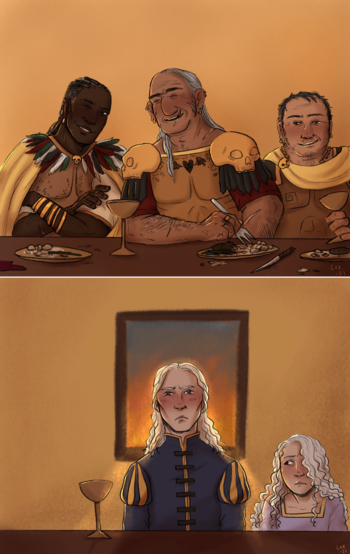 At a time when Myles would have been captain-general, Viserys Targaryen feasted the captains of the Golden Company in the hopes they might take up his cause to reclaim the Iron Throne from King Robert I Baratheon. His sister Daenerys Targaryen, then a little girl, witnessed them eat his food and hear his pleas and laugh at him.[3]

After Myles's death in 296 AC, his skull was dipped in gold and placed upon a company standard. He was succeeded as captain-general by the company paymaster, Ser Harry Strickland.[1]

When Jon Connington arrives at the Golden Company's encampment near Volon Therys, he contemplates the company's golden skulls ringing the captain-general's tent. Myles's skull has a glittering grin.[1]

Later, following the taking of Griffin's Roost, Jon recalls a conversation with Myles, in which Jon explained he could not have done better at Stoney Sept to prevent the Battle of the Bells, that not even Lord Tywin Lannister could have done more. Myles responded that Tywin would have burned down the town and killed every living creature in it, bringing an immediate end to Robert's Rebellion, as Robert's death would have led to Lords Eddard Stark and Hoster Tully accepting pardons. This recollection strengthens Jon's desire to not make the same mistake in his war to seat Prince Aegon Targaryen on the Iron Throne.[4]

A captain-general should be feared, by friend and foe alike. If men think me cruel, so much the better.[1]

Jon: Tywin Lannister himself could have done no more.
Myles: There is where you're wrong. Lord Tywin would not have bothered with a search. He would have burned that town and every living creature in it. Men and boys, babes at the breast, noble knights and holy septons, pigs and whores, rats and rebels, he would have burned them all. When the fires guttered out and only ash and cinders remained, he would have sent his men in to find the bones of Robert Baratheon. Later, when Stark and Tully turned up with their host, he would have offered pardons to the both of them, and they would have accepted and turned for home with their tails between their legs.[4]

—Jon Connington and Myles about the Battle of the Bells

In life, Ser Myles Toyne had been ugly as sin. His famous forebear, the dark and dashing Terrence Toyne of whom the singers sang, had been so fair of face that even the king's mistress could not resist him; but Myles had been possessed of jug ears, a crooked jaw, and the biggest nose that Jon Connington had ever seen. When he smiled at you, though, none of that mattered.[1]

Soldier to the bone, Toyne was fierce but always fair, a father to his men and always generous to the exile lord Jon Connington.[1]