Princess Myrcella Baratheon is known to the Seven Kingdoms as the middle child of King Robert Baratheon and Queen Cersei Lannister. A member of House Baratheon of King's Landing, her siblings are Princes Joffrey and Tommen. In the television adaptation Game of Thrones, she is played by Aimee Richardson (Seasons 1 and 2) and Nell Tiger Free (Season 5).

Myrcella has golden curls,[2] emerald eyes,[3] and full lips.[4] She is described by her uncle, Tyrion Lannister, as having all of her mother Cersei's beauty, but none of her mother's nature.[5] Myrcella is delicate, beautiful, and courteous.[6] For her age, she displays courage, a strong will, and high intelligence.[7][4] She is eight,[8] or almost eight,[9] at the beginning of A Song of Ice and Fire. Myrcella resembles Rosamund Lannister.[10]

Following the tourney on Prince Joffrey's name day, Myrcella and her siblings traveled with Cersei to Casterly Rock with their grandfather, Lord Tywin Lannister.[11]

Myrcella has a garden at the Red Keep.[12] 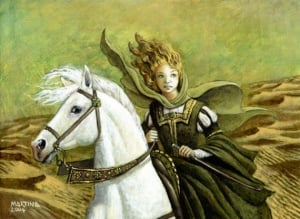 Princess Myrcella accompanies her father, King Robert Baratheon, north to visit Winterfell and the Starks. She is smitten with Robb Stark during the feast.[9] She rides in the royal wheelhouse with her mother, Queen Cersei Lannister.[6]

Myrcella and Tommen do not recognize a dirty Arya Stark when she chases cats in King's Landing.[2]

Lord Eddard Stark, the new Hand of the King, discovers that Myrcella and her siblings are not the biological children of Robert, but actually of Cersei's twin brother, Ser Jaime Lannister.[13] With Robert dying from being gored by a boar, Lord Renly Baratheon suggests that Tommen and Myrcella be seized and that Robb wed Myrcella. Eddard refuses, however.[14]

After Robert's death, Myrcella is in the throne room when Eddard confronts Cersei and is betrayed by Lord Petyr Baelish.[15]

Myrcella attends the tourney on King Joffrey's name day.[16] Announcing his claim to the Iron Throne, Stannis Baratheon declares that his niece and her siblings are abominations born of incest.[17]

In an effort to win Dorne to the side of House Lannister in the War of the Five Kings, Myrcella's uncle, Tyrion Lannister, offers to marry her to Trystane Martell, the youngest son of Doran Martell, Prince of Dorne.[18] The offer is accepted and Princess Myrcella, accompanied by her sworn shield Ser Arys Oakheart of the Kingsguard, sets sail on the Seaswift for Braavos, where they will be met by an escort from Dorne. The riot of King's Landing breaks out after Myrcella leaves the harbor.[7]

Myrcella arrives at Sunspear and befriends Princess Arianne and Prince Trystane, the children of Prince Doran.[19] Her chambers are in the Old Palace's Tower of the Sun.[4]

After the death of King Joffrey at his wedding, Prince Oberyn Martell reminds Tyrion that according to Dornish law, Myrcella should succeed to the Iron Throne rather than her younger brother, King Tommen I.[20] 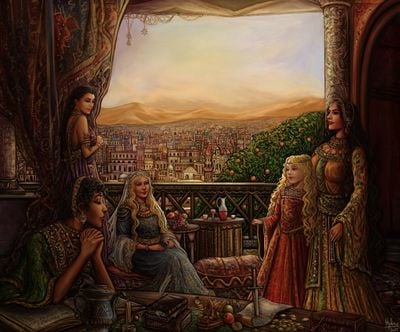 Myrcella adapts quickly to spicy Dornish cuisine, unlike her bodyguard, Ser Arys. She also enjoys playing cyvasse with Prince Trystane. Doran intends to bring the princess to the Water Gardens when he departs Sunspear.[4]

Following the death of her father, Oberyn, Tyene Sand suggests to her uncle, Prince Doran, that Myrcella be crowned queen in accordance with Dornish law.[3]

To get revenge against the Lannisters for the deaths of Oberyn and Elia Martell, Arianne schemes to crown Myrcella queen after Joffrey's death, since Myrcella is older than Tommen. Arianne hopes that the Dornishmen will rise to defend her claim for a chance to war against the Lannisters, who would be expected to support Tommen.[4]

Arianne and a small group of friends travel with Myrcella through the desert, leaving the princess's cousin and handmaid, Rosamund Lannister, as a decoy in Sunspear. Myrcella is claimed to be suffering from redspots to prevent Trystane from interfering. When they come to their destination on the Greenblood, Doran's guardsmen are waiting for them, for their conspiracy has been betrayed. Myrcella's bodyguard, Ser Arys Oakheart, attacks the guardsmen, but is killed by their captain, Areo Hotah. During the chaos, Ser Gerold Dayne, called Darkstar, strikes at Myrcella to force Doran into a war against the Lannisters.[10] He fails to deal a killing blow, as Myrcella's horse veers away, but the princess is still wounded. Maester Caleotte saves her life, but Myrcella loses an ear and has a hideous facial scar.[21]

One of the new dromonds for the royal fleet is named Princess Myrcella by Tommen in honor of his sister.[22]

Having fled in exile to Pentos, Tyrion considers crowning Myrcella but is convinced by Illyrio Mopatis to support Daenerys Targaryen.[23]

Ser Balon Swann arrives at Sunspear, where he tells Prince Doran that King Tommen wishes his sister to return to King's Landing for a visit, inviting along Myrcella's betrothed, Prince Trystane. Doran assures the knight they will see Myrcella at the Water Gardens.[24]

During a private conversation with Doran and the Sand Snakes, Arianne tells Obara, Nymeria and Tyene Sand that Myrcella will tell Balon that her Kingsguard, Arys, had been slain by Gerold Dayne, and that Gerold had tried to kill Myrcella as well. Prince Doran is convinced Myrcella will ask Balon to hunt down Gerold, and that Balon will not be able to refuse. Meanwhile, he decides that Myrcella will, indeed, return to King's Landing, in the company of Nym.[24]

Reflecting in the riverlands, Jaime Lannister thinks he will need to tell Myrcella the truth about her paternity, though the Dornishmen will not like it.[25]

During her imprisonment by the Faith, Cersei Lannister learns of Gerold's attack on her daughter from her uncle, Ser Kevan Lannister. Kevan tells her that Myrcella blames Darkstar for both the attack on her, as well as the death of Arys.[26] During a meeting of the small council, Kevan discusses the preparations to be made for Myrcella's return. The princess has begun her journey to King's Landing with Nymeria.[27]

She had all of her mother's beauty, and none of her nature.[5]

Sansa: A royal wheelhouse is no place for a wolf. And Princess Myrcella is afraid of them, you know that.
Arya: Myrcella is a little baby.[6]

She is so pretty, don't you think? I wish that I had curls like hers. She was made to be a queen, just like her mother.[3]

I love Myrcella as a daughter.[4]

The truth was, the princess was braver than her brother, and brighter and more confident as well. Her wits were quicker, her courtesies more polished. Nothing daunted her, not even Joffrey.[4]

Protect Myrcella with your life. Defend her... and her rights. Set a crown upon her head.[4]

Ser Arys was still dead, and Myrcella ... I never wanted that, never. I meant the girl no harm. All I wanted was for her to be a queen. If we had not been betrayed ...[21]