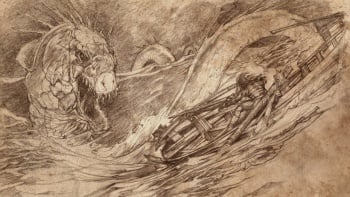 Nagga was a legendary sea dragon said to live during the Age of Heroes, and was slain by the Grey King.[1] 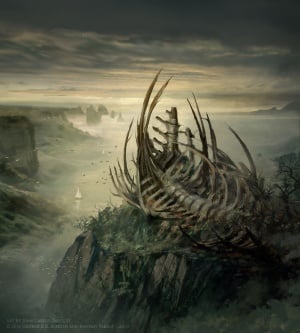 According to ironborn legend, Nagga was the first sea dragon, able to feed on krakens and leviathans and drown islands when angry. The Grey King, helped by the Drowned God, managed to slay her on the shores of the island Old Wyk and built there his hall out of her bones. Her jaws became his throne and her teeth made his crown. He warmed his hall with her living fire. However, when the Grey King died, the Storm God drowned out her fire and the sea took the throne. Only her bones that made the pillars and beams remain.[1]

Euron Greyjoy is chosen King of the Iron Islands in a kingsmoot on Old Wyk held amongst the sea dragon's bones at Nagga's Hill.[1]

The name "Nagga" may derive from Nāga, a serpent deity in religions such as Hinduism, Buddhism and Jainism.