The Night's Watch rebellion of 50 AC[N 1] was a large scale mutiny against the leadership of the Night's Watch by recently defeated members of both the Faith Militant and Maegor Targaryen's loyalists who chose to avoid death sentences by taking the black. Despite being bitter enemies, both groups hated Maegor's nephew and successor Jaehaerys I Targaryen, so they made common cause and tried to turn the castles they were garrisoning on the Wall into their own lordships. The uprising was in a sense the final conflict of the Faith Militant uprising, and the only one to involve House Stark, which aided the Watch loyalists in putting down the rebels.[1]

During the thousands of years that the Night's Watch has existed, there have been various rebellions by local garrisons. Several infamous, semi-legendary Lord Commanders are alleged to have even tried to set themselves up as kings of the Wall and lands south of it, but these are figures from the mists of ancient times such as the "Night's King" who purportedly lived not long after the Wall was first constructed.[1]

By the time of the Targaryen Conquest, though the Watch had diminished somewhat on the scale of millennia, it still numbered about ten thousand black brothers in total. The Targaryen unification ended the petty wars between the Seven Kingdoms (save with Dorne), and the supply of new recruits from the losing sides of those conflicts slowed down for the next half-century onward. During the Faith Militant uprising and other conflicts of the tyrant Maegor Targaryen, however, a new stream of defeated rebels chose to join the Watch to avoid execution. For example, in 43 AC the Hightowers arrested the Oldtown chapter of the Warrior's Sons and delivered them to Maegor: out of 200 knights, three quarters chose to take the black to avoid the sentence of death. As Maegor's reign advanced, many more hundreds of Poor Fellows were sent to the Wall as well.[1]

Ultimately, Maegor's younger nephew Jaehaerys I Targaryen rose up against him, and in rapid succession all the Great Houses abandoned him, after which he was found dead on the Iron Throne in 48 AC. Jaehaerys brought peace between the Faith and the crown, and now sent several of Maegor's loyalists to the Wall. Out of Maegor's five surviving Kingsguard, four chose to take the black - among them Ser Olyver Bracken and Ser Raymund Mallery, who had actually switched sides to Jaehaerys, though only when Maegor's defeat was obvious. Jaehaerys observed that they were willing to break their Kingsguard vows once before while serving Maegor, so he could not trust them to serve him now.[1] 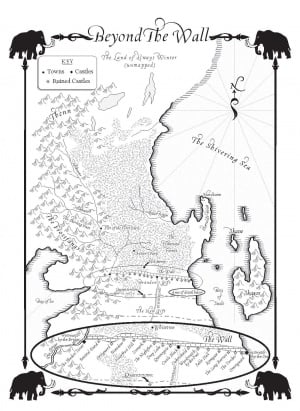 Map of the castles along the Wall (click to expand)

While the numbers of the Night's Watch had been declining since the Wars of Conquest almost half a century earlier, so many thousands of the Faith Militant as well as Maegor's loyalists were sent to the Wall upon the ascension of Jaehaerys I that the Watch had difficulty feeding them all with only the lands they currently held.[1] In 50 AC, the Lord Commander of the Night's Watch[N 2] unwisely decided to use them to restore castles that were crumbling into ruin and work the surrounding lands to sustain themselves. Ser Olyver Bracken was put in command of Rimegate and Ser Raymund Mallery was placed in command of Sable Hall, with new garrisons of former Warrior's Sons and Poor Fellows, and orders to restore the fortifications (located roughly halfway between Castle Black and Eastwatch-by-the-Sea). Instead, Maegor's two turncloaks made common cause with the Faith Militant to rebel against the leadership of the watch, and try to make their castles into their own seats and set themselves up as lords.[1]

The uprising was short-lived, as for every black brother who joined the rebels, ten more stayed true to their vows. Walton Stark, the new Lord of Winterfell after the death of his father, rallied his bannermen then joined the Watch loyalists to clear out the rebels. They assaulted and retook Rimegate, then hanged any survivors - except for Olyver Bracken himself, whom Walton Stark personally executed using his family's ancestral greatsword Ice.[1]

The rebels at Sable Hall didn't even put up a fight: as soon as word reached them of how Rimegate had fallen, they realized they had no hope of holding their castle and fled north beyond the Wall, hoping to make common cause with the wildlings. Lord Walton pursued them, but after two days he was caught in heavy snows in the Haunted Forest, where he and his men were actually set upon by primitive, half-legendary giants. It is written that Walton Stark managed to kill two of the giants using his Valyrian steel sword, but in the end he was dragged from his saddle and torn apart. His surviving men withdrew back to Castle Black.[1]

As it turned out, the wildlings had no more love for deserters from the Night's Watch than for loyalists. Half a year later, a wildling chieftain delivered Ser Raymund Mallery's head to Eastwatch. When asked what befell Raymund's remaining traitors, the chieftain laughed and said they ate them.

Walton Stark died childless, so rule of Winterfell passed to his younger brother Alaric Stark. Lord Alaric blamed King Jaehaerys I Targaryen for his brother's death, as the mutineers' lives had been spared by the young king after the wars of Maegor I Targaryen. Alaric showed Walton's tomb in the crypt of Winterfell to Jaehaerys when the king visited Winterfell in 58 AC.[1]

Queen Alysanne Targaryen flew with Jaehaerys on his royal progress to Winterfell in 58 AC, and decided to fly father north to inspect the status of the Night's Watch. Whatever short-term benefit the influx of new recruits from the Faith Militant uprising had brought to the Watch had apparently been offset by losses in the rebellion of 50 AC. Alysanne was impressed with the bravery of the black brothers, but as their own Lord Commander admitted, many of their castles were crumbling into disrepair and the Watch lacked the coin to build new ones. Not only was the Nightfort too expensive to repair, the Watch's numbers were so low that they could not hope to fully garrison it. Alysanne donated her royal jewelry to pay for the construction of Deep Lake as a replacement for the Nightfort, and convinced Jaehaerys to double the size of the Gift, the lands south of the Wall held directly by the Watch.[1]

Alaric: Walton lies down here in darkness in no small part thanks to you. Stars and Swords, the leavings of your seven gods, what are they to us? And yet you sent them to the Wall in their hundreds and their thousands, so many that the Night's Watch was hard pressed to feed them ... and when the worst of them rose up, the oathbreakers you had sent us, it cost my brother's life to put them down.
Jaehaerys: A grievous price, but that was never our intent. You have my regrets, my lord, and my gratitude.
Alaric: I would sooner have my brother.[1]

—Alaric Stark and Jaehaerys I Targaryen