From A Wiki of Ice and Fire
Jump to: navigation, search
For other uses, see Nymeria (disambiguation).

Nymeria is a direwolf bonded to Arya Stark. She is a litter-mate of Grey Wind, Lady, Summer, Shaggydog, and Ghost. She is named after Princess Nymeria of the Rhoynar.[4]

Nymeria is found with her litter-mates near their dead mother in the snow by Jon Snow and Robb Stark.[3] Arya keeps Nymeria as close as possible, even allowing the direwolf to sleep at the foot of her bed.[4] Nymeria accompanies Arya south on the journey to King's Landing.

When Joffrey Baratheon and Sansa stumble upon Arya playing at swords with her friend Mycah by the Trident, Joffrey challenges Mycah to a duel, and cuts Mycah in the process. Joffrey refuses to relent, which leads Arya to hit him with her stick. Joffrey attacks Arya with his sword, and Nymeria lunges at Joffrey and bites him. After letting him go, Arya and Nymeria flee.[6] Fearing for Nymeria's life, Arya and Jory Cassel are forced to chase her away.[7]

On her march north with Yoren, Arya hears talk of a huge female wolf who leads a pack around the Gods Eye that has no fear of men. Lord William Mooton and his sons ride out to hunt her, but are forced to retreat, losing their hounds in the process.[8] 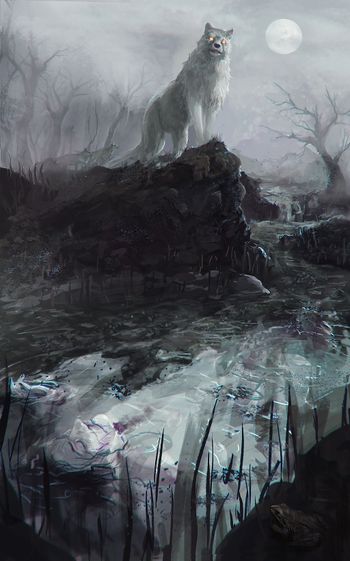 Nymeria finds the body of Catelyn Stark, art by GibiLynx

Arya sees a pack of wolves while searching for Riverrun. The largest of the wolves returns her call when she howls at them. Later, she has a wolf dream where Nymeria attacks Iggo of the Bloody Mummers and his companions and kills them.[9]

Through her warg bond with Nymeria, Arya finds Catelyn Stark's body in a river. Nymeria drags her to the shore and tries to wake her, but realizes she is dead. She flees when she sees men approaching.[10]

In Braavos, Arya has wolf dreams at night, where she leads a great pack in the forest.[11]

Septon Meribald reports that a great pack of hundreds of wolves prowls the Trident.[12]

Ser Danwell Frey complains of an unprecedented number of wolves in the Riverlands and tells Jaime that packs of wolves attacked their baggage train as they traveled from the Twins.[13]

Ser Dermot of the Rainwood scouts near Riverrun, and reports finding hundreds of wolves who killed two of his sentries. One of the dying men said the pack was led by "a she-wolf of monstrous size. A direwolf, to hear him tell it." Jaime wonders if the wolf is Nymeria.[14]

In a wolf dream, Jon Snow senses Ghost see Nymeria singing under the moon, and a hundred wolves of her pack ("small grey cousins") singing with her. She was in hills, which were warmer than the area of the Wall, and full of food.[2]

When Arya is blinded by the Faceless Men, she still experiences wolf dreams of seeing the night sky of Westeros. During these dreams Arya sees the first snowfall in the Riverlands, and understands that prey has been scarcer since the snow began. During one of these dreams, Nymeria and her pack feast on a shepherd, his dogs and flock. Some of Nymeria's little grey cousins are afraid of men, even dead men; but to her meat is meat and men are prey.[1]

Arya, now using the identity of "Mercedene" aka "Mercy", a mummer at a playhouse in Braavos, wakes from a wolf dream of Nymeria running through a forest with her pack, hunting prey, watched by a tree.[15]

We had to throw rocks. I told her to run, to go be free, that I didn't want her anymore. There were other wolves for her to play with, we heard them howling, and Jory said the woods were full of game, so she'd have deer to hunt. Only she kept following and finally we had to throw rocks. I hit her twice. She whined and looked at me and I felt so 'shamed, but it was right, wasn't it? The queen would have killed her.[7]

There's this great pack, hundreds of them, mankillers. The one that leads them is a she-wolf, a bitch from the seventh hell.[8]

—thoughts of Nymeria/Arya Stark, to the body of Catelyn Stark