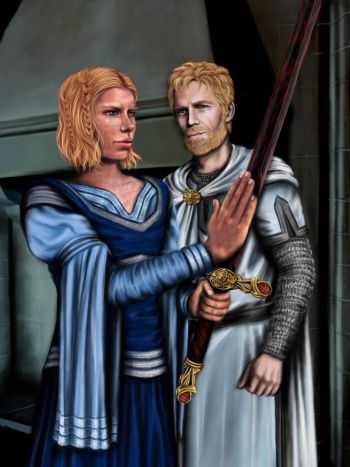 A depiction of Oathkeeper © Valyrian Steel 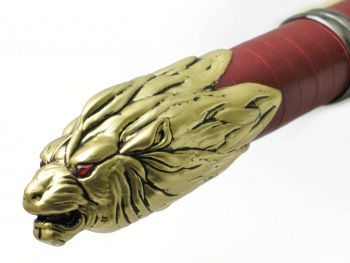 For the Game of Thrones episode, see Oathkeeper (TV).

Oathkeeper is a Valyrian steel longsword, which is forged by Tobho Mott[1] from Eddard Stark's greatsword, Ice, along with a smaller blade, Widow's Wail.

It has grey-black and red ripples through the steel, with the red almost as dark as the grey. Its scabbard glitters gold and is decorated with a row of lion's heads and smoldering red rubies.[2] The pommel has a golden lion's head with ruby eyes that shine like two red stars.[3]

Lord Tywin Lannister has the armorer Tobho Mott melt down Eddard Stark's Valyrian steel greatsword Ice, to make a sword for House Lannister. Mott has enough metal to make two swords, one longsword and a slightly smaller sword. He attempts to tint the swords crimson for the color of House Lannister, but the metal absorbs the color, resulting in ripples of nearly-black grey and red almost as dark as the grey.[1]

Tywin presents the sword as a gift for his elder son, Ser Jaime Lannister.[4] Ser Kevan Lannister tells Jaime that the gift is heartfelt, but Jaime thinks his father and uncle are mocking his missing hand.[5] Jaime instead gives the sword to Brienne of Tarth, charging her with finding the whereabouts of Sansa Stark, asking her to name the sword "Oathkeeper".[5] Jaime notes the appropriateness of protecting Eddard Stark's daughter with his own steel.[5]

Brienne of Tarth is initially reluctant to use Oathkeeper, considering it almost a "magic sword", but wields it to slay Pyg and Timeon at the Whispers,[6] and Rorge at the inn at the crossroads.[7] When she is captured by the brotherhood without banners, they use the sword's appearance as evidence that Brienne serves House Lannister, and Lady Stoneheart says it should be better named "Oathbreaker". She demands that Brienne take up the sword to keep her oath to Catelyn Stark and slay Jaime Lannister, or be hanged. Brienne initially refuses, but when she is being hanged and sees her friends dying, she screams "sword".[3][8]

Brienne appears at Pennytree while Jaime is camped there. She bears Oathkeeper, and tells Jaime that to fulfill her quest, Jaime must come alone with her to save Sansa Stark from the Hound, claiming they are a day's ride away.[9]

This one was thicker and heavier, a half-inch wider and three inches longer, but they shared the same fine clean lines and the same distinctive color, the ripples of blood and night.[1]

There was a time that I would have given my right hand to wield a sword like that. Now it appears I have, so the blade is wasted on me. Take it.[5]

—Jaime Lannister, to Brienne of Tarth

Black and red the ripples ran, deep within the steel. Valyrian steel, spell-forged. It was a sword fit for a hero.[2]

Even the sound of it is sharper than an ordinary sword.[6]